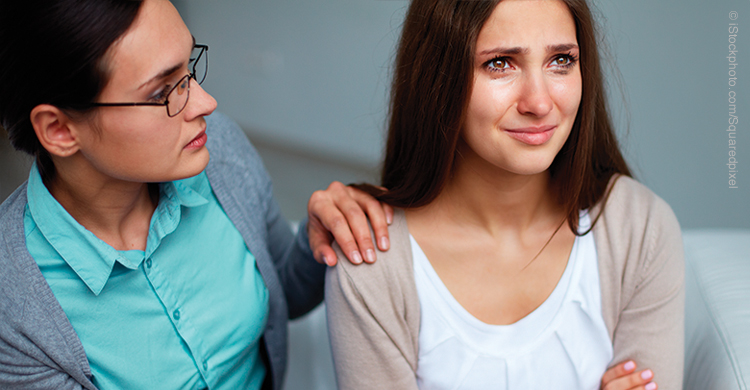 Janet* and her husband weren’t planning on becoming grandparents so soon. They already had one adult son and had just said goodbye to their second oldest son, John, as he entered the Marines, but they were still concentrating on being parents, busy with their 12-year-old son, Bill, and their 16-year-old daughter, Jen. Janet was also trying to fit in the classes required to become a nurse. But life often doesn’t go according to plan.

“Jen found out she was pregnant when she was feeling continually nauseous in February 2009 and took a home pregnancy test,” Janet recalled. “I knew something was going on when she was crying but refused to tell me why. When she finally told me, it was really difficult for both of us.”

Jen had already been getting into some trouble up to that point. There was a lot going wrong in her life that she couldn’t come to terms with. She had lost her beautiful older sister to cancer, and her grieving dad was struggling with an addiction to pain killers. Jen felt lost. Janet had been shocked to find out just how lost, when Jen spent the night with her boyfriend after saying she was sleeping over at a friend’s house.

“I had called to talk to her at her friend’s the following morning, and she wasn’t there,” Janet said. “So Jen was grounded for that. I had to ground her a lot in those days, because she was hanging out with the wrong crowd. They weren’t wild when she first met them, but they all went into party mode as they got older.”

“All of her friends encouraged her to have an abortion,” Janet explained. “Only one friend encouraged her to have the baby, but only if she gave her up for adoption. Here in North Carolina Jen needed my consent for an abortion, and for an inkling of a second I considered it. It would have been so much easier on her in so many ways, but I had already made that same mistake when I was a teenager. I refused to let her live the rest of her life with that kind of grief. Anyway, that unborn child was my grandchild!” Janet emphasized. Jen’s father was devastated, but he also refused to approve an abortion.

Jen was very upset with her mother at first. “She told me I was being selfish because of my own guilty feelings,” Janet remembered.“ Jen was very fearful about what everyone would think, fearful about the pain of labor—fearful about everything. Then she saw her baby’s heart beat when we had the ultra-sound, and as she began to feel the baby moving, she finally began anticipating having her baby. She ended up thanking me in the end, saying she hadn’t really wanted an abortion, but she had just been so scared.”

Having decided she was going through with the pregnancy, Jen then had to decide whether to keep the baby. Her brother John insisted the baby was part of the family and had to stay with the family. Janet didn’t want the baby going to anyone else’s home either, but kept her opinion to herself.

“I didn’t try to influence Jen one way or the other concerning adoption,” Janet affirmed. “I encouraged her to think about what it would cost her, in so many ways, to keep the baby. She made the choice and is now living with the consequences, good and bad.” Jen told her mother she couldn’t imagine placing her baby for adoption. Janet continued, “Some people can and they are heroes to do so, knowing they’re not able to raise the baby themselves and don’t have any support. I’ve heard of some parents who make their kids move out under these kinds of circumstances. Jen knew she had us to help her through, no matter what.”

Not everyone was so supportive. Because Baby Katie came into the world under less than ideal circumstances, Janet’s parents still haven’t shared with everyone the fact they have a great-grandchild. Janet understands their reluctance, but points out that although the behavior resulting in Jen’s pregnancy was wrong, “We need to learn from our experiences, not hide them. I’m so blessed by my little granddaughter, even though in the beginning it was a little embarrassing to talk about. When your children have been in church all theirlives, and they know what’s right and wrong, people are going to judge. You just have to get tough about the whole thing.”

Janet loves taking care of Katie and has made it a family affair, not a burden to be borne.

“I was taking chemistry the summer before Katie turned one, and I would try to get most of my homework done at school,” she explained. “I knew when I got home Jen would want some relief, because it’s hard when there’s no daddy in the picture. Katie is so precious, I don’t mind helping out at all. All of our lives have been enriched every day. My son Bill loves her to death, and he is great with her. every time John comes home, the first thing he says is ‘Where’s Katie?’ even Jen’s dad, now free of the crippling drug addiction, has fallen in love with sweet Katie.”

Just trusting in God, the mom and grandmom planned their schedules so they could both go to college and still care for the baby. Little Katie is now attending a wonderful Christian school.

In the beginning, Jen wasn’t very interested in pursuing a deeper relationship with the baby’s father; she just wanted to be a good mom and concentrate on her schooling. In fact, Jen hadn’t even known she was pregnant when she made the decision to finish earning her high school diploma through a community college program, which turned out to be a good decision.

“Jen hadn’t been happy at her school and wanted to graduate at her own pace,” Janet says. “This turned out to be a good thing. It was much easier finishing that way in general for her, since the schedule was more accommodating. She graduated in December 2009, a few months after Katie was born and earlier than she would have through the high school.”

In the meantime, Katie’s dad went through his own changes for the better and has now reconciled with Jen. They are planning a September wedding.

“Jen’s so glad she didn’t abort her child and shares that with other girls who are facing the same crisis,” Janet says. “She doesn’t want anyone to make the mistake she almost made. Jen’s really matured and is now able to see things in so-called ‘friends’ that she’s not comfortable with and avoids.”

Not only did Jen save Katie’s life, but Katie may also have saved hers. Janet reported that Jen told her if she hadn’t had Katie, she might have died from continuing on the destructive path she was on. As a bonus, Janet and her husband received a beautiful, lively granddaughter, and their sons received a precious niece. Jen stated it simply: “Katie is my greatest gift from God.”

*Names have been changed for the sake of privacy.

Jayne Thurber-Smith is a freelance writer from Virginia Beach, Virginia. She frequently writes on topics of religious interest.