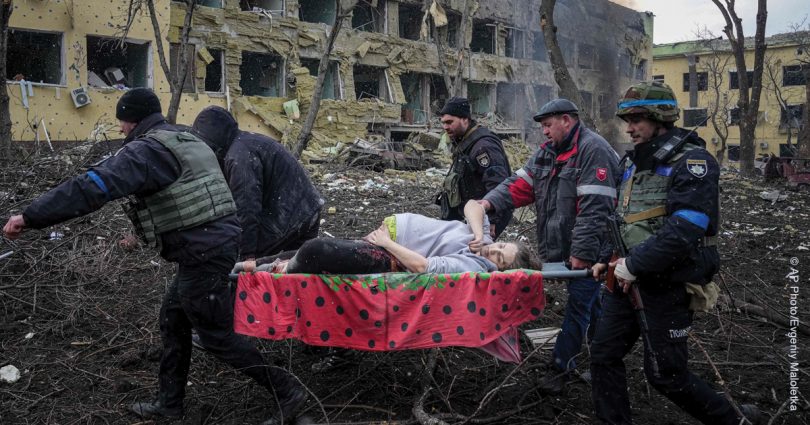 You’ve likely seen the image of a pregnant Ukrainian woman carried out on a stretcher from a bombed-out maternity hospital. Badly wounded, she cried out “Kill me now!” as she realized she was losing her preborn baby. Later, after desperate resuscitation attempts of the woman and after a cesarean section of the baby, both the woman and her baby died.

This is an embodied illustration of the evil and barbaric reality of tyrannical selfishness at its peak depravity in humanity: the taking of innocent life.

Like you, I’m distressed and heartbroken for the Ukrainians. I grieve each new wicked attack—children dying in front of parents, whole families shelled to death as they flee, and children and wives in agony as they wave goodbye to daddies and husbands staying behind to fight.

The attack on a maternity hospital and the death of the Ukrainian woman and her preborn baby received widespread media attention. What was the common denominator? All outlets condemned the attack, using language such as atrocity, murder, and war crimes. Surprisingly, many even referred to the preborn baby as, yes, a baby.

Right now, we’re witnessing a media phenomenon—a general recognition of moral objective truth as it applies to the war in Ukraine. It is impossible to deny the wickedness evidenced in real-time images of lifeless soldiers, women and children slain in the streets, babies bombed in bunkers, and the preborn dying in their dying mothers’ wombs.

The social media cosmos seems to agree that the destruction and mass death are atrocious and unconscionable. To say or post otherwise would not only be illogical and senseless, but it would also be a denial of moral objective truth, which in this case says murdering the innocent is wrong and denies them their right to life.

A sad stroll down the media highway will highlight the endless stories run by some of the biggest names in news examining how the war in Ukraine is violating human rights at every level of international law, stressing the war’s impact on cities, cultures, families, children, pregnant women, and even their preborn babies. Did you catch that? Women and preborn babies. For decades, many of these same publications and networks have tried sheltering the word abortion under the umbrella of “human rights.” But the word abortion is a façade. It is a smoke-and-mirrors word that predates “choice” and “healthcare,” yet it is still used as a substitute for the more accurate but less attractive word: murder.

Now that Roe v. Wade has been reversed, we have seen a media uproar that is unlikely to settle for some time. This is evidenced by the scratching sounds coming from the bottom of their barrel, pulling up the most illogical, morally reprehensible, unsound reasons for why a baby isn’t a baby and doesn’t deserve protection.

Don’t pin it all on the news media though. Social media has devolved into an unprecedented engine with near-omnipotent shaping and reshaping capabilities of societal “reality” and “truth.” It seems that all it takes is a click of the mouse, and in an instant, wide-eyed billions worldwide are told not just how to think, feel, and behave, but also what.

The moral revolutionaries relentlessly push relativism, spreading alternative narratives to moral objective reality and truth, easily polluting and persuading the vulnerable, naive, and ignorant already taken hostage by a steady digital dopamine drip. Dare to disagree with them? You’ll be issued a dunce hat and some digital chalk and told to post 100 lines of “I won’t disagree ever again with the moral revolutionaries” or else face social cancellation.

Is this fifth grade all over again, where no one is willing to stand up to the bullies? Or maybe our heads are too far up our phones to even notice or care, lulled to a sort of self-absorbed sleep by some sinister voice whispering, “Shh, go back to sleep. You do you! The preborn aren’t really people yet. They’re an inconvenience. Out of sight out of mind.”

The ever-growing culture of death in Ukraine is reprehensible, but face it, our nation has long been a culture of death all in the name of personal autonomy and convenience. Images of a recoiling preborn baby in fear and pain when faced with the business end of a needle, a pill, or a sopher clamp don’t make it into your social media feeds, do they?

Objective moral truths have been eaten and digested by cultural relativism then excreted as moral subjectivism—“live your truth” they say. Under this logic, a pregnant woman’s and/or coercive birth father’s subjective “truth” to destroy their preborn baby overrules baby’s objective human right to be released from the womb. So, whatever stage of development that preborn baby is in, we cannot deny that the most dangerous place in the world for baby to be is in the womb.

The brilliant minds of the medical community raced to develop a COVID vaccine in order to preserve life, but using some sort of Jedi mind trick, politicians, progressive media, big-tech, and social justice warriors deceitfully market abortion as a “choice” and a “right”—kind of like that old Burger King slogan “Have it your way.” Don’t want the inconvenience of pickles? No problem.

Our culture isn’t progressing, nor is the world for that matter. Evolving? Ha! More like devolving. Flip open social media, the news, or go outside; like a receding hairline, humanity is going backward. Saying someone is a progressive gives that person way too much credit. Since culture is regressing from sanity, regressive seems more appropriate. Admit it, our nation throws parades instead of what should be funerals.

Images of dead Ukrainian babies in bombed-out shelters and lifeless bloodied toddlers carried into hospitals by their screaming moms and dads are rightly condemned by our media as murder and as atrocities, yet saying or posting anything that discourages someone from tearing apart the living baby inside a woman or calling that action murder is labeled as hate speech. While we criticize the speck of sawdust in other nations’ eyes for genocide, let us first tend to that two-by-four jetting out from our own eye.

Now that Roe has been overturned, the fight will continue at the state level, with nearly half the states promising continued abortion access and some even offering themselves as abortion “sanctuaries.” So the fight for life will continue.

Pregnant and considering abortion? Don’t let the media’s moral madness marketing persuade you by saying your preborn baby is better off dead and that you’ll live a happier life for it. That is an evil lie. Adoption is a courageous and love-filled act—an alternative to ending the life of your precious little girl or boy, not to mention a more peace-filled decision for you.

Social justice, human rights, and equality begin at our creation. Yet until this is the law of all lands, the fight and defense for the preborn continue. Be prepared; the culture is sick of pro-lifers. You may be belittled, shamed, and even ostracized, if you haven’t been already. But better to not be on the side of what the world defines as progressive history—the culture of death—and instead be on the right side of objective truth: the right to life.

Zack Carter is an associate professor of communication at Bob Jones University in Greenville, South Carolina. He specializes in social relationship psychology, with a heart for relationship cohesion and boundaries, especially in marriage and family. He is happily married to his lovely wife, Stacey, and they have one adorable daughter and two sweet pups.