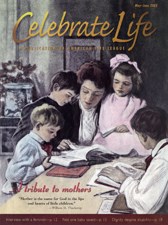 Early American feminists such as Susan B. Anthony and Elizabeth Cady Stanton were vehemently anti-abortion. Many women realized that they were not being represented by such extreme pro-abortion views, and decided to start an organization that supported women across the nation who believed that true feminism should protect life from the earliest stages of conception. In this issue, Celebrate Life Magazine spoke with Serrin Foster to discuss Feminists for Life.