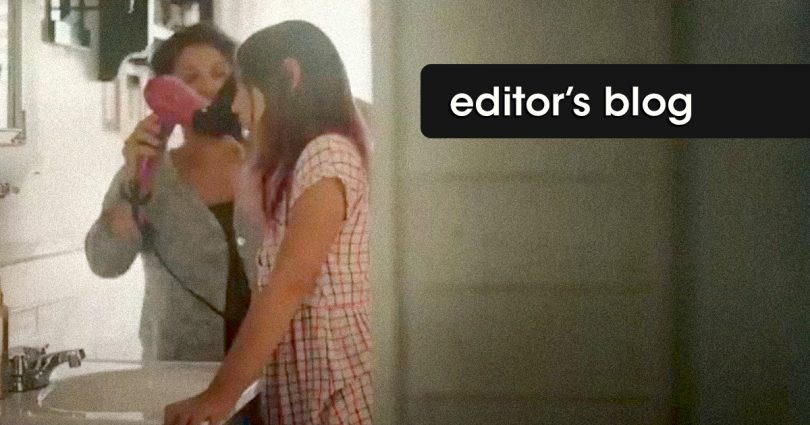 A new Pantene shampoo commercial opens with a woman blow-drying the long hair of her son—who looks to be about 11 or so—who now lives as a girl. On the screen flash the words: “For LGBTQ kids, hair is more than how you look.”

The 2-minute commercial then focuses on his two “moms,” who talk about the fact that this child—Sawyer—now looks and dresses like a girl.

The commercial does not address whether one of the women is his biological mother or if any of the three are even related.

A voice-over of one of the women says: “I remember the first time she [Sawyer] was out in the community wearing the clothing she wanted and her hair. And she kind of was herself. And that was the first day where I saw her.”

Wow, that’s startling, isn’t it? The first day the woman—who may or may not be Sawyer’s biological mother—saw her son was when he dressed like a girl in public?

What does this say about their relationship prior to this moment?

One of the women then goes on to say of Sawyer: “She has always been super gender creative.”

Gender creative? What does that even mean?

Barring a chromosomal abnormality, there are two genders. A person is either male or female.

Yet we know that every single human being is a unique and unrepeatable person. That means that every person has different likes, dislikes, hair color, skin color, eye color, DNA, interests, and talents.

Sitting with his two “moms” on the couch, Sawyer says of dressing like a girl: “It made my insides match my outsides.”

Aside from sounding like something that he was coached to say, isn’t saying that he feels like a girl a gender stereotype in itself? What does a girl feel like? And how would a small child know one way or the other? Unless he was told?

We know that children have fleeting fantasies. We know children have spontaneous desires. This is so because children love to explore. Their tiny growing bodies and their malleable brains are absorbing a world of experiences at an alarming rate—and it’s often the case that they do not even have words for how they are feeling.

That’s why we must learn to communicate on their level. We must talk and ask questions. It is our job as parents to listen and to guide our children, not to become part of the fantasy. It is our job to help children understand respect and reverence for the body God gave them, for we know that God makes no mistakes.

As I watched this commercial, I had to wonder: What’s next for Sawyer? Hormone therapy? Surgery that mutilates his body?

Allowing this lie to perpetuate is tantamount to child abuse. If a child is truly unhappy for some reason, we must delve into the reason for the unhappiness rather than applying a Band-Aid that will not only mask the symptoms but that will cause more harm as the child grows.

God’s mercy and compassion must extend through us as we deal with people in these situations. And, as we encounter the parents and guardians of children who are dealing with these emotions, we must teach them to think. We must help them learn to teach their children to love who they are. And who they are is the sex they were born with.

One of the women said that, as a girl, Sawyer could be “who she is.” But that’s exactly the problem. Sawyer is not a girl. That’s not who he is.

Allowing a little boy to live a lie does immeasurable harm to his growing brain, to his self-esteem, and to his psychological well-being.

At the end of the commercial, these words appear on the screen: “Those who make us feel seen make us feel loved.”

Was this little boy not seen until he pretended to be a girl?

This is indoctrination—plain and simple. And it’s coming into your homes. Commercials like this aim to make people who don’t agree with this kind of lifestyle the bad guys. They call us intolerant. But intolerance has nothing to do with it, for it’s not intolerance that we feel. It’s concern, love, and compassion for the person’s well-being.

God commands that we live with compassion and mercy, but that does not mean that we must acquiesce or capitulate to a woke culture that harms children.

Further, God teaches that we must evangelize. Part of evangelization is teaching His truths. Not just some of them. All of them.

So parents, beware. This woke ideology is in your kids’ school, on social media, on TV, and now it’s coming to commercials.