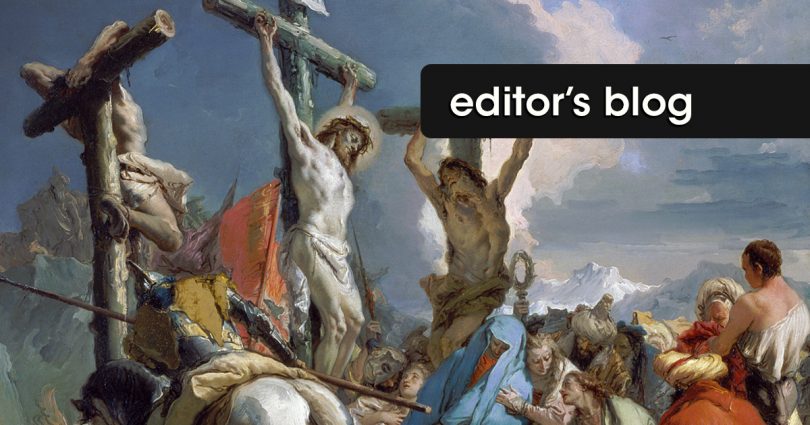 The Triduum is upon us, and tomorrow is Good Friday. As we approach this terrible and dark day, I can’t help but think of the hymn “Were You There When They Crucified My Lord?”

Every year, in the parish I grew up in, we would sing this song, and every year it made me cry, for it forced me to really visualize Christ’s crucifixion.

After each question, the song laments: “Sometimes it causes me to tremble.”

What they did to Him that day should cause us to tremble.

No, we were not physically present there. We were not part of the crowd who chose to free a murderer and then shouted “Crucify Him!” We were not the people who spit on Christ as He staggered through the street carrying His heavy cross. We were not the Romans who pounded nails into His hands and feet.

So, yes, we were there, because we are the reason that He allowed Himself to be tortured and killed.

And we are the people who continue to crucify Him. We crucify Him every day with our sins.

The injustice of His death should cause us to tremble and weep with sorrow. But so should our actions, our disbelief, and the times we have chosen worldly things over Him.

Yet, despite all of this, He still loves us. Knowing all of our sins and all of the ways we fail, He still desires us. He still says: “Come to me. I am here.”

And that is our Easter Sunday.

There has never been a love so immense as the love God has for us. He proved that love on Good Friday so that we could have an Easter Sunday.

The blood He shed for our sins opened eternity with Him for us.

But we should also tremble with joy—at the empty tomb, at the promise fulfilled, and at the mercy of an all-loving and all-powerful God.

Alleluia, alleluia! He is risen!

Happy Easter from all of us at Celebrate Life Magazine!