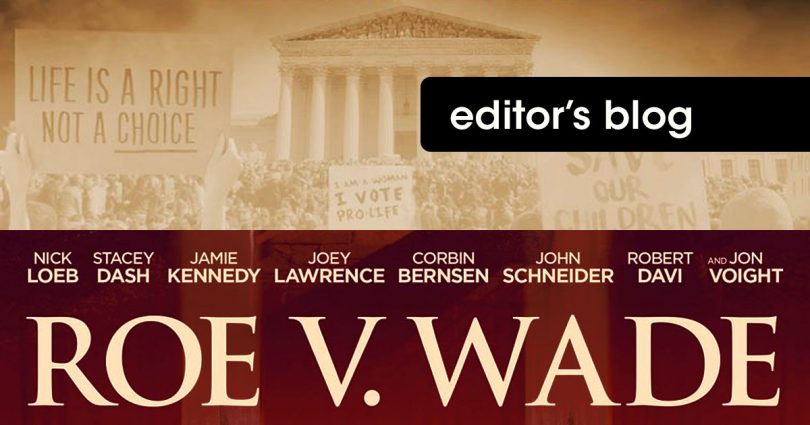 After hearing actor and director Nick Loeb and pro-life activist and speaker Alveda King talk about the movie Roe v. Wade on two recent episodes of Jerry Cirino’s pro-life Fides podcast, I felt compelled to watch it. Loeb directed and acted in the movie, while King produced it and played a small role.

Though some of the acting left a little to be desired, the movie did not disappoint. It has a star-studded cast, including Corbin Bernsen, Jon Voight, Stacey Dash, Joey Lawrence, Steve Guttenberg, and more. But what was most compelling were the facts presented. Critics panned the movie as propaganda and said it was full of lies, but as Loeb states in the podcast, all his facts have documentation that can be found on the movie’s website.

Want all the facts? You’ll have to watch the movie! Let’s just talk about a few specifics today.

We’ll start with the undeniable truth that a preborn baby is a human being from the first moment of creation. But we don’t need a movie to tell us this. We don’t even need our faith to tell us this. We simply need science. However, there are many who either do not know this, do not care, or who deny it outright. It is our job to lovingly educate these people and to help them understand the humanity of the preborn baby.

Let’s look at another fact presented by the movie. When Nathanson boasted to a woman that he and Larry Lader played huge roles in swaying the media and fueling the movement to decriminalize abortion, he mentioned the statistic that prior to Roe v. Wade there were one million illegal abortions per year in the US, with 10,000 women dying in back-alley abortions.

And then he bragged: “I completely made that up.” He said the numbers weren’t even close to reality. The woman was astounded and asked how they could have gotten away with that. Larry responded arrogantly: “We control the media.”

“We control the media.” Let that sink in.

Abortion is a big business. We see that fact flaunted throughout the movie, but it slaps the viewer in the face in a disturbing scene where Nathanson, his wife, and a group of friends discuss the fact that there’s big money to be had in abortion. They even gleefully sing a song about it; its first few lines state: “There’s a fortune in abortion. Just a twist of the wrist and you’re through. The population of the nation won’t grow if it’s left up to you.”

And lest you think that those lines were made up for the movie, you need only read Nathanson’s book Aborting America.

In the movie, pro-life activist and president of the Right to Life Committee Mildred Fay Jefferson expresses frustration about the people fighting for abortion “rights.” She says: “I scream. They scream louder.”

Isn’t that the truth?

For too long now, we have let their screams engulf our nation. Yes, we scream too, but it’s not often loud enough. We have to scream louder. We must teach others that apathy kills. When we do not speak up, and when we do not give voice to the preborn, we deny the truth that the movie desperately attempts to present.

The truth can be hard to hear, and lots of people don’t want to hear it. They do their best to deny it. They disregard the fact that a preborn baby is a human being and focus on the woman and her “rights.” Some may even say “It’s not my problem.”

But abortion affects us all in one way or another. This movie beautifully illustrates that fact.

After the real Bernard Nathanson converted to Catholicism and stopped performing abortions, he created a documentary called Silent Scream in which he not only describes what happens during an abortion but shows a real one on a sonogram. Even though the baby’s scream is silent, it is incredibly loud to the viewer. His tragic death right before our eyes is heartbreaking.

Let us contemplate this child and the millions of other children who have died in abortions since Roe v. Wade. Let us never forget their screams or the screams of those who advocate for abortion. And let us always strive to make our voices louder.

You can watch Roe v. Wade on many streaming services. And you can listen to Jerry Cirino’s pro-life podcast episodes at listennotes.com/podcasts/fides-podcast-jerry-cirino-dUJhBpTq65o.