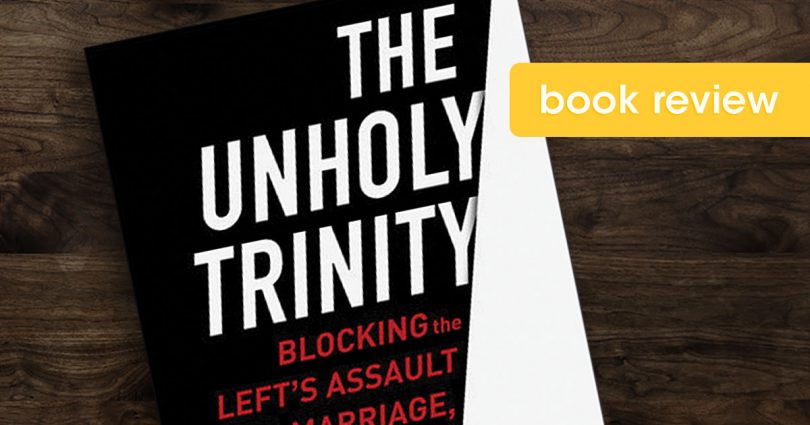 A war is raging against truth in America. Writer, Matt Walsh, is fighting at the front lines. “All people and cultures probably reject truth to some extent or another,” Walsh writes. “But ours aims to forsake it completely, as a matter of principle.” Attempts are continuously being made to convolute and twist the truth to fulfill and satisfy the self’s own enjoyment, convenience, and pleasure, which Walsh demonstrates throughout his book, The Unholy Trinity: Blocking the Left’s Assault on Life, Marriage, and Gender, with examples and insight.

Unfortunately, in today’s world, the growing epidemic of worship of self (worship of the evil one) has become a determining factor in the laws being passed, the insanity constantly being spewed and celebrated, and the liberal education in schools. Walsh breaks down, dissects, and explains the disastrous effects of self-worship. He explains how abortion, same-sex marriage, and transgenderism all stem from rejection of God and denial of the nature of life, marriage, and sex. Self-worship pushes mankind farther and farther from God as the individual makes himself his own god, which is exactly what the evil one desires.

The philosophy behind the push to destroy Christianity is liberalism, which “[i]s itself defined by its rejection of objective truth” and “[i]s the categorical belief in the supremacy of the individual.” Liberalism, as Walsh writes, was born in the fires of damnation and was the philosophy that led to the Fall of Man. It is the philosophy that has “[p]ropelled all the great villains throughout history.”

Each page of The Unholy Trinity provides a thorough look into the holes of liberal arguments, beginning with a woman’s so-called “right to choose” to gender identity issues. Not only does Walsh offer over 190 pages of much-needed truth, but he provides Christians with hope in the forms of knowledge and prayer.

In today’s world, where sin is glorified and insanity respected, it is a relief to find a book that stands for faith and reason. Walsh is not afraid to address “controversial” topics and he crushes the reign of relativism that has taken over the mindsight of millions. Truth, as Walsh writes, is the mission of conservatives.

Instead of looking down at our phones, staying comfortable in our own little bubbles, and ignoring the heretical beliefs that are plaguing our society, “[i]f we want to reclaim our culture, we have to look at it, and think about it, and care about it.” One way to do that is by reading and reflecting upon The Unholy Trinity: Blocking the Left’s Assault on Life, Marriage and Gender to prepare ourselves better in fighting an ongoing culture war against God and truth. As Edmund Burke once said, “The only thing necessary for the triumph of evil is for good men to do nothing.” Walsh’s book is a must read!

Denise Makowski lives in New York with her husband. She earned her BA in journalism from Stony Brook University, where she founded the SBU Students for Life, and is currently pursuing a Master’s Degree at Queens College. She is a pro-life journalist and has written articles tackling the lies of Planned Parenthood, the beauty of life, and the work of pregnancy resource centers.