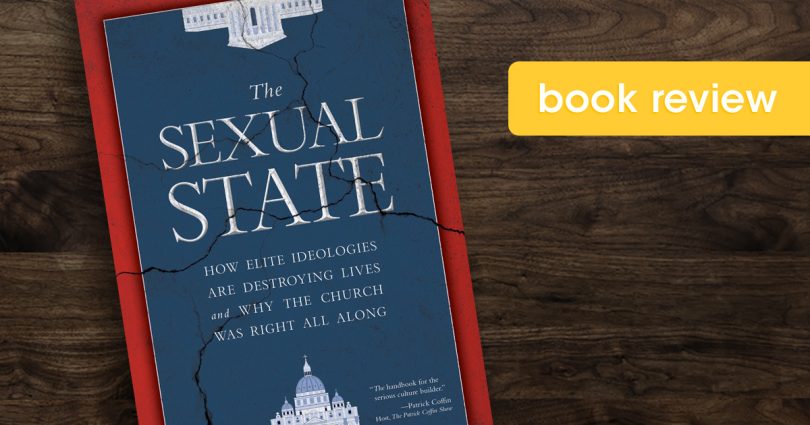 We know that the traditional family is in jeopardy. We see evidence of this all around us. Divorce, abortion, euthanasia, violence in the home and outside, contraception, and so much more are rampant. In The Sexual State: How Elite Ideologies Are Destroying Lives and Why the Church Was Right All Along, author Jennifer Roback Morse, PhD, founder of the Ruth Institute—a nonprofit organization created to defend the family—explains that all of these problems (and more) are the direct results of the sexual revolution. Furthermore, she maintains that the sexual revolution was created by the “elites” of society and has been promulgated through the State (the government).

Morse explains that, according to the sexual revolution: “A good and decent society should 1) separate sex from childbearing: the Contraceptive Ideology; 2) separate both sex and childbearing from marriage: the Divorce Ideology; [and] 3) eliminate all distinctions between men and women except those that individuals explicitly embrace: the Gender Ideology.”

The premise of her book lies in the fact that the sexual revolution needs the State and that “breaking the connection between sex and babies in people’s minds requires government coercion, media propaganda, economic restructuring, and educational indoctrination (not to mention the pills, medical devices, sterilization surgeries, and abortions).” And that is exactly what the elites of society and government have done. She uses both facts and history to prove that the sexual revolution has harmed millions of people.

Morse systematically explains the harmful effects brought upon society by each of these three ideologies. From the Contraceptive Ideology’s roots in eugenics, to the Divorce Ideology that says that kids are resilient and will eventually “get over” any hurt they feel at being split between two houses, by missing one parent, or by never having known a biological parent at all, to the Gender Ideology that argues that “men and women are completely interchangeable,” she shows how the breakdown of the family has led to the breakdown of society.

Her book ends with what she calls a Manifesto for the Civilization of Love—guidelines that not only spell out what the government should not have control over, but also things the government should do. She then gives the reader a personal challenge by outlining ways we can create a society and a culture that uphold the dignity of each person and that value the family as the foundation of society. This eye-opening book forces us to face the fears we’ve had all along—that something is terribly wrong with our society and that we can no longer hide from it.

The Sexual State is a sobering wake-up call that demands that readers acknowledge the dire situation we find ourselves in today. Will we accept her call to take action and effect change in our society? Doing so is both daunting and difficult—and it will take a lot of work. But if we don’t do it, who will?

The Sexual State: How Elite Ideologies Are Destroying Lives and Why the Church Was
Right All Along, by Jennifer Roback Morse, PhD; TAN Books; 2018; 420 pages; $27.95 (paperback)