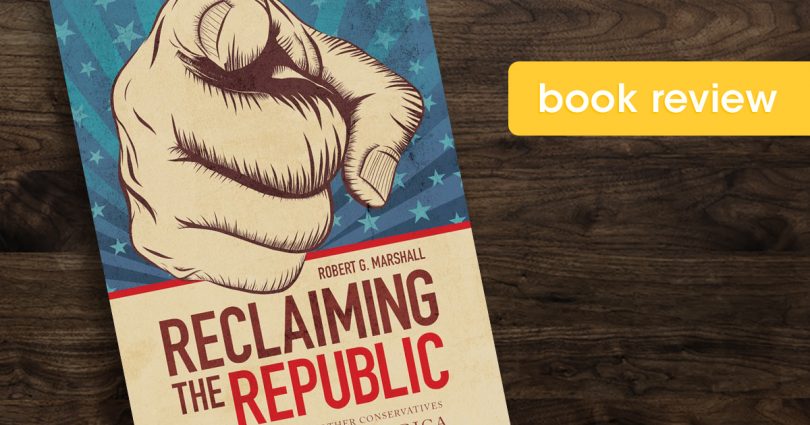 Robert Marshall served the state of Virginia in the House of Delegates with honor and integrity for 26 years. He is an authority on many challenging aspects of the defense of human beings and the Church, including the sordid history of Planned Parenthood. But Marshall’s recent book entitled Reclaiming the Republic: How Christians and Other Conservatives Can Win Back America breaks new and amazing ground.

The two chapters I enjoyed most were four and five, in which Marshall discusses political tolerance. He explains that the inconceivable way that opponents to Christianity use the battle cry for “tolerance” to marginalize and then discredit anyone who dares to bring Christ and biblical principles into the public square is demonic. Yet, he says, it is very real.

Marshall tells the reader that political liberals want folks to be confused. Their goal is “to disarm public resistance to their radical and fundamental opposition to the ‘laws of nature and of nature’s God’ as they implement their program for homosexuality, abortion, religion, the family, and the role of an omnipotent state.”

Throughout his book, Marshall instructs us on points of action we should take, specifically focusing on how the legislative process can work for good. He maintains that, though the legal walls that once protected the sanctity of marriage and the preborn have been torn down, all is not lost. He proposes a simple strategy—one that he has proven works. His own political campaigns spanning more than two decades and his strategy of motivating folks demonstrate this.

Marshall is the master of precinct power—the power of the people to fight for right by working to elect men and women who care more about serving God than they do making a public name for themselves over the bodies of preborn babies and God’s laws.

The beauty of this book is that he explains how to get this done! Let me give you one example of his wise counsel:

In the 2008 general election, the states operated 185,671 precincts. If conservative Americans each took charge of one of the roughly 186,000 precincts across the nation, and worked for principled candidates, we could change the direction of our country. It is that simple! Compared to the sacrifices our Founding Fathers made, this is the least we can do to ensure our children, grandchildren, and great grandchildren are not saddled with crippling debt and moral anarchy.

When you read Reclaiming the Republic, you give yourself the opportunity to change our nation, to save the babies, and to restore God to the forefront of the public square. The time is now, and this book is your tool.

Reclaiming the Republic: How Christians and Other Conservatives Can Win Back America, by Robert G. Marshall; Tan Books; 2018; 248 pages; $24.95 (hardcover)