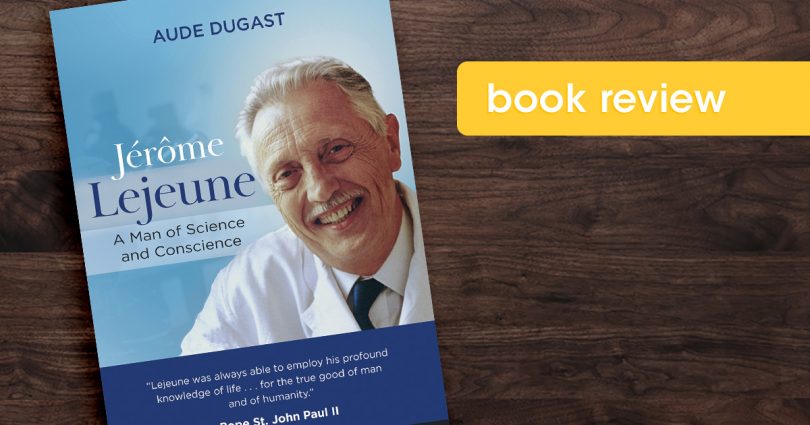 Dr. Jérôme Lejeune changed the world. This French pediatrician and pioneer in genetics was most notable for finding the genetic cause of Down syndrome—an extra chromosome in pair 21—in 1958. On January 21, 2021, 27 years after his death, he was declared venerable by Pope Francis, not for his worldly accomplishments, but for his “heroic virtues” in staying true to his Catholic faith.

In Jérôme Lejeune: A Man of Science and Conscience, author Aude Dugast chronicles a compelling portrait of this humble, world-renowned scientist who lost worldly accolades by defending preborn babies at a time when the scientific community began caving to a eugenicist mindset through abortion. And when the development of genetic testing in utero began to create a seek-and-destroy mentality, Lejeune soundly condemned it.

This biography is the culmination of 11 years of interviews that offer glimpses of the tender love Lejeune had for his wife and five children alongside his great scientific accomplishments and his devotion to Christ and his Catholic faith.

Lejeune’s scientific achievements are many, and he received numerous prestigious awards and honorary doctorate degrees. But sadly, once he angered the scientific community with his bold pro-life message, his many speaking invitations dried up.

What touched me most about this biography was that Lejeune’s scientific genius was rooted in faith. As Dugast writes: “His faith enlightened by intelligence flourished. And this intellectual and spiritual harmony gave him great joy and great freedom.”

The biography reveals a man who refused to be controlled by peer pressure. In 1969, before Lejeune’s acceptance speech for the prestigious Allen Memorial Prize, two colleagues warned him not to speak against abortion. He ignored them and spoke with honesty and love for preborn babies. Dugast wrote: “Taking the logics of eugenics to its conclusion, he then proposed that the National Institute for Health be replaced by a National Institute of Death, the name that would more accurately describe its activity.”

There was no applause at the end of the speech. As Dugast explained: “The shock wave would spread, and he knew it. At the age of forty-three, he had just ruined his career.”

It is at this juncture that I fell in love with both the story and the man.

In 1994, Pope John Paul II named Lejeune president of the Pontifical Academy for Life. However, he died of cancer just 33 days after that appointment—at the age of 68.

Lejeune’s work and his voice still live on today. To honor him, family and colleagues opened the Institut Jérôme Lejeune in 1997. This organization is now recognized as Europe’s foremost medical center specializing in Trisomy 21 and other genetic intellectual disabilities.

Lejeune once said: “Health through death is a ridiculous triumph. Life alone can win.” Through his life and work, Lejeune gave us a witness of true faith and a true love for babies.

Patti Maguire Armstrong and her husband have 10 children. She is an award-winning author. She writes for The National Catholic Register and a number of Catholic websites and blogs at www.CatholicNews&Inspiration.com.