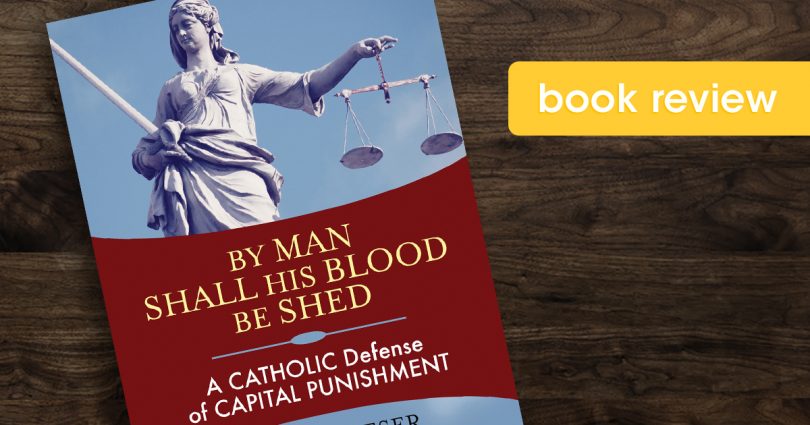 During the mid-1970s, when I was a high school senior, two college grads came to our CYO building to introduce us to the National Youth Pro-Life Coalition. Their message —linking abortion and euthanasia with war, capital punishment and other concerns— seemed novel at the time.. That approach came to be known as the seamless-garment ethic, which for several decades has been a cornerstone of the Catholic Church’s Respect Life program. And, to my 17-year-old brain in that high-crime era, the toughest part was capital punishment.

Now, two Catholic scholars have published a book that proclaims the wrongheadedness of the seamless-garment ethic. By Man Shall His Blood Be Shed: A Catholic Defense of Capital Punishment, is the work of Edward Feser, an assistant professor at Pasadena City College, and Joseph M. Bessette, a professor at Claremont-McKenna College, both in California.

Their argument for capital punishment is summed up in this passage from page 92:

“Our position claims that the state should strive to realize cosmic justice, which is why we defend capital punishment. Murderers and the like deserve death in an absolute, metaphysical sense; the state is supposed to inflict on offenders what they deserve . . . so the state ought to execute murderers and the like.”

This book is by no means light reading, with numerous references to early Greek and Roman philosophers, the Bible and theology. From the Bible came the principle of lex talionis. While affirming the “eye-for-an-eye” principle, lex talionis also calls for mercy and justice: No punishment must be more severe than the crime itself.

The seamless-garment teaching notwithstanding, the Catholic Catechism continues to refer to murder as “a sin that cries out to heaven for vengeance.” Feser and Bessette see this as an implicit endorsement of capital punishment.

The core of the two professors’ argument, however, is traditional natural law. This system of ethics underlies much of Judeo-Christian teaching—and even some elements of Western legal thought.

Many view capital punishment as having a practical benefit beyond punishing murderers: that of deterrence. The possibility of execution leads many murderers and their advocates to push for life sentencing—which limits their ability to commit murder again.

Others have a practical reason for opposing the death penalty: the possible execution of a wrongly convicted individual. A prudent approach would limit the death penalty to cases involving a solid confession or incontrovertible evidence of guilt.

Feser and Bessette are to be commended for cutting through the non-stop sloganeering used to oppose—or to favor—the death penalty. I would not expect them to be among the crowds that gather to either witness or cheer on executions. Their book serves as a reminder that complex topics are best dealt with through thought and reason, two characteristics that they might agree are sorely lacking in the world of 2018.

By Man Shall His Blood Be Shed: A Catholic Defense of Capital Punishment, by Edward Feser and Joseph M. Bessette; Ignatius Press; 2017; 424 pages; $24.95 (paperback)

Rob Sample is a freelance writer from Monroe, Connecticut and father of two. He has worked in publishing and corporate communications for 30 years and has been published in a variety of business, scientific, religious, and educational publications.