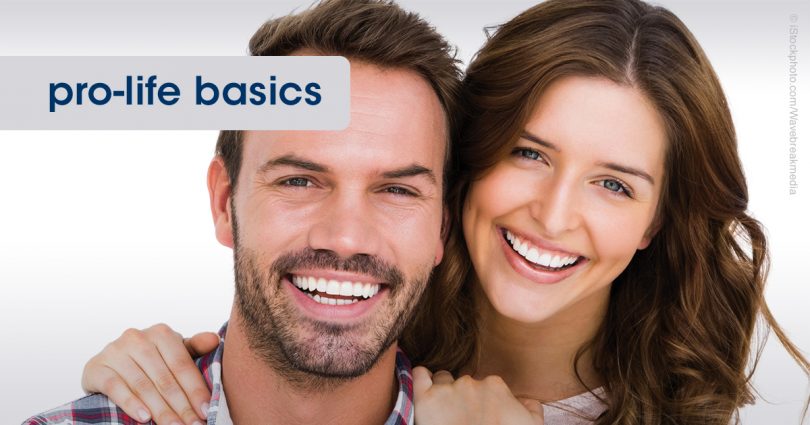 Well, first, natural family planning is NATURAL, whereas anything else, no matter what you call it, is not.

This may sound like an oversimplification, but when we consider how God designed man and woman, perhaps it really is the only answer that makes sense, especially in our cockeyed, sexually-saturated society today.

One journalist writes what I think is a lovely perspective on sexual intercourse: “When spouses express their love through sexual intercourse, they celebrate the commitment they made to each other through their marriage vows. But sexual union is much more than celebration. It is a vibrant symbol of two lives in one that nourishes and sustains the marital union it symbolizes.”1

In other words, the very intention of sexual intercourse in marriage is love, for each other, for God, and for the gift of pouring one’s self out for the good of another.

Or as Pope John Paul II taught: “The meaning of life is found in giving and receiving love, and in this light human sexuality and procreation reach their true and full significance” (Evangelium Vitae, 81).

And in his Letter to Families, John Paul II taught that “sexuality, by means of which man and woman give themselves to one another through the acts which are proper and exclusive to spouses, is by no means something purely biological, but concerns the innermost being of the human person as such. … The total physical self-giving would be a lie if it were not the sign and fruit of a total personal self-giving, in which the whole person, including the temporal dimension, is present: if the person were to withhold something or reserve the possibility of deciding otherwise in the future, by this very fact he or she would not be giving totally” (Letter to Families, 11).

And when a couple decides to employ unnatural (artificial) means of contraception/birth control to thwart the union of that act, they are no longer acting out of love that is based on trust in God; they are withholding total love of the other. They are acting in a selfish way that speaks to the individual or mutual choice to refuse children at a given moment in marriage.

And we know all too well that adultery in our day is at pandemic rates2 precisely because the “me” of sex outweighs the “you” in that union, meaning that one is saying “no” to God and His will.

So, to get back to the question, let’s be clear: natural family planning can be abused, for sure, but when it is properly learned, it is a practice that brings the couple into a conversation with God that always results in the same loving expression: “We entrust our marriage to Your divine will, Lord. While we might not wish to have a child right now, we realize that You alone know best.”