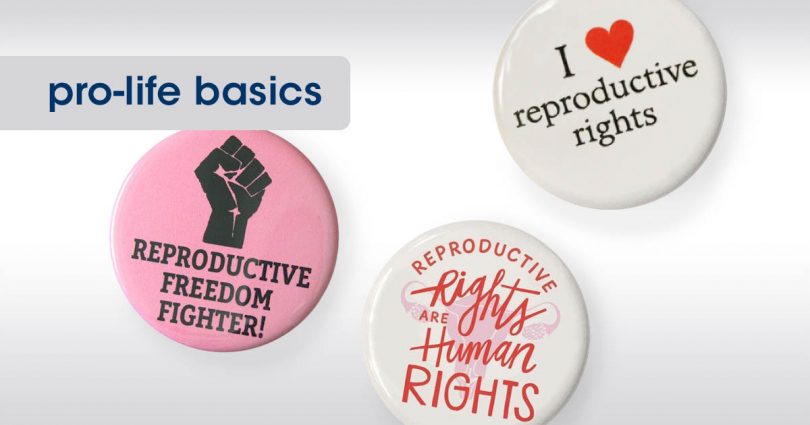 Well, as is the case with most cultural excuses for sin, the term reproductive rights is a smokescreen. Too many people have decided that the right to reproduce entitles them to choose life or death at will. They then call this “right” a liberty—which to them means freedom to do as one pleases.

But if we pay close attention to the term reproductive rights, we see two obvious flaws. First is the word “reproductive.” Animals, vegetation, and copy machines reproduce. Human beings procreate. Ideally within marriage, a man and a woman join together, and in a unitive act they procreate children. As human beings, each has made a conscious choice to celebrate life and bring forth children.

The second word—“rights”—is the more confusing of those two words because, as St. John Paul II taught in The Gospel of Life, “broad sectors of public opinion justify certain crimes against life in the name of the rights of individual freedom.” He went on to teach that when such so-called rights are actually crimes, attacks on the innocent “are carried out in the very heart of and with the complicity of the family—the family which by its nature is called to be the ‘sanctuary of life.’”

Thus, the term reproductive rights was coined specifically to deny the horror of killing the innocent by planned human acts, whether perpetrated in a laboratory, with the ingestion of a pill, or by a surgical procedure. These crimes become socially acceptable ways to plan a family, even though the result is always a dead baby.

The term reproductive rights is devoid of decency, honesty, and mercy. They are words used to propagate evil, and at every opportunity we must expose such treachery for what it is. As St. John Paul II taught: “When conscience, this bright lamp of the soul, calls ‘evil good and good evil’ it is already on the path to the most alarming corruption and the darkest moral blindness.”

Truly, the marketing of evil actions as personal, human rights is the direct result of either moral blindness or simply dead conscience. In fact, Fr. Philip Dion wrote about how man kills his conscience in seven steps. He stated: “The first sign that habitual sinning and perversion is a disastrous turning off the road to God is sadness. Nature is relentless and ultimately strikes anyone who acts against her. As with the law of gravity, one can deny sin but he never escapes the effects of sin.”1

And so shall it be for those who deny God and advocate killing under the false mantra of reproductive rights. No matter how hard such people may try to deny that a human being exists during every moment of pregnancy, nature knows. Ultimately these foolish people will pay the price, so let us pray for them.