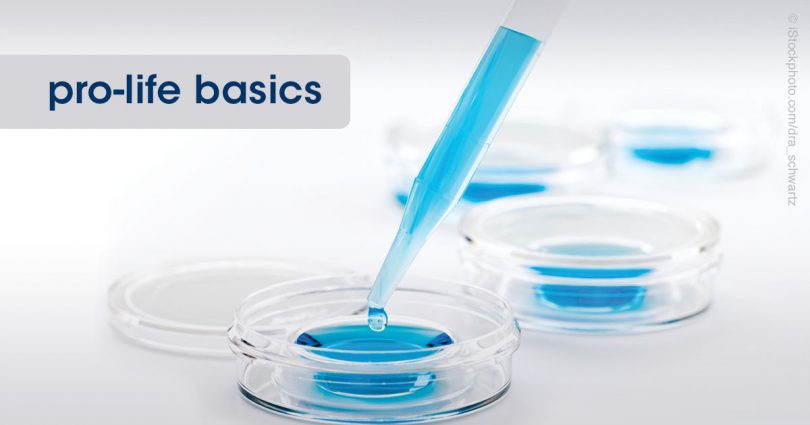 Induced pluripotent stem cell (iPS) research has often been described as ethical and thus deserving of prolife support. However, upon studying how such cells are created, it becomes clear that, just as human embryonic stem cell research relies on the killing of individual human beings, iPS research can also be deadly.

Dianne Irving, PhD, explains the “reprogramming” process used in iPS research: “[T]he highly differentiated DNA in the adult human cell . . . is transformed or induced (by various means) back to the state of differentiation of the DNA as found in human embryonic pluripotent ‘stem cells.’ These ‘embryo-like’ human pluripotent ‘stem cells’ are then urged to become more mature in order to develop human cells for therapies.”1

Theresa Deisher, PhD, observes, “These [iPS] cells are not safe; they form fatal tumors in adults. Additionally, adult reprogrammed cells require transformation with viruses, another safety hazard. One need only read the clinical history of gene therapy and the deaths associated with it, to hesitate before lauding an advance that requires four gene therapies.”2

Most importantly, current iPS research methods could rob a human embryo of his life, as Dr. Irving also explains:

iPS research . . . requires the use of “biological materials” . . . derived originally from human embryos and human fetuses. . . This has been acknowledged by these researchers themselves. . . . [A]side from the very real possibility that real living human embryos might be “accidentally” reproduced during the iPS process, . . . pieces of human embryos and fetuses are used throughout these experiments. . . Therefore, such research could hardly claim that it was “free” of the unethical destruction of any human embryos and fetuses.3

Dr. Irving defines current iPS research and the manipulation of facts surrounding it as “deconstructed science.” Reprogrammed cells aren’t safe for therapeutic use, immoral means are used to produce them, and the process could create new human embryos. This is why we oppose it.