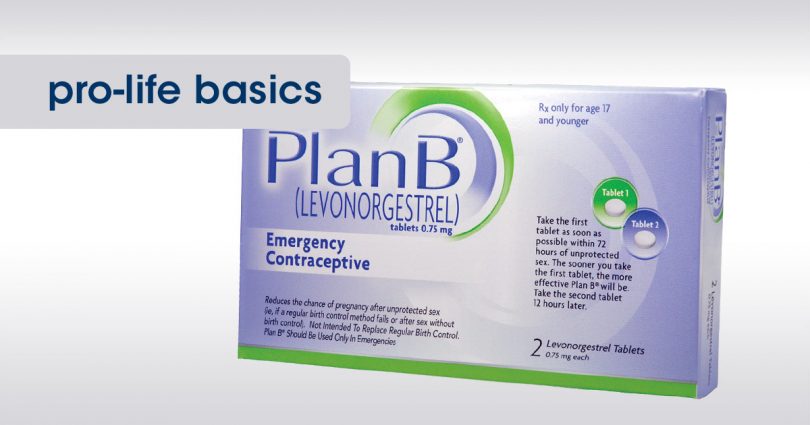 Unlike the false claims often made about the morning-after pill (which conform to popular opinion and government-imposed policies),the information American Life League presents is based on scientific facts (see www.MorningAfterPill.org).

As in the case of other hormonal contraceptives (see www.ThePillKills.com), one of the morning-after pill’s three possible mechanisms of action is preventing an embryonic preborn baby from implanting in the lining of the uterus—which causes an abortion. This lethal effect has been verified by scientific research and acknowledged in patient information, although manufacturers and other promoters typically use misleading language (e.g., referring to a human embryo as a “fertilized egg” and falsely defining pregnancy as beginning at implantation) to disguise this grim reality.

We recently received the following note, which reveals how meaningful it can be to know the truth about this deadly drug:

Thank you so much for bringing out the truth about the Plan B pill [a commonly used type of morning-after pill]. I didn’t know many of the things that I found out about this pill. I’m a Christian, and I fell into sin and fornication. I had gone to the doctor for pregnancy tests several times, and the doctor pushed me into taking the Plan B “just in case” I got pregnant. I didn’t know much information about it, but I took out the prescription anyway and put it away.

One night, my partner and I had unprotected sex, and the next morning, I was so scared. . . . I thought about how unsupportive my partner was . . . , how I had no money, and how my family . . . would react if I got pregnant. And I remembered I had the pill and, without thinking, I took it, but after 12 hours. After a few days, I was having morning sickness. I got a pregnancy test, and sure enough, I was pregnant. I was afraid, but relieved that it didn’t work.

I gave birth to my baby in April in good health; she is now seven months old. I thank God that [Plan B] didn’t work. I love my baby, and I really regret, with all my heart, taking this. I asked for God’s forgiveness and have since returned to Him, but I’ll never forget that I almost didn’t have her. If I had only known all the information about it and how it worked, I wouldn’t have taken it. I thank God for my baby, and I pray and hope other girls know the truth about this.