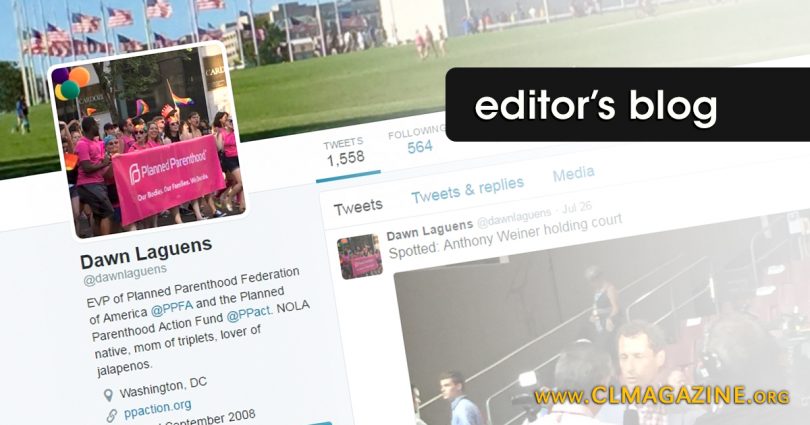 There are six things that the Lord hates, seven that are an abomination to him: haughty eyes, a lying tongue, and hands that shed innocent blood, a heart that devises wicked plans, feet that make haste to run to evil, a false witness who breathes out lies, and one who sows discord among brothers (Proverbs 6:16-19).

Dawn Laguens is the Executive Vice President of Planned Parenthood Federation of America. On 2 June 2016, she tweeted as follows:

Guess how PPAF kicked off 2016? It headed a grassroots outreach with volunteer training to influence politics some more; the hashtag for the event was #PinkOutTheVote. On 13 May 2016, Dawn explained the hashtag #PinkOutTheVote in another tweet:

Okay, so women can’t afford to have Senators play politics with a SCOTUS vacancy because politics is everything! Let’s translate this. When politics does not support Planned Parenthood, and thus threatens its bottom line—money—then PP cannot afford to have any politicians playing politics; however, when politics does support Planned Parenthood, and thus protects its bottom line—money—then playing politics is fun! You can Pink Out the Vote to support money…oh, I mean, “women.”

The truth is that nobody should play politics—sacrificing principles for perceived gains—especially when the lives of human beings are at stake. PP plays politics like nobody’s business to maintain and grow its wealth at the expense of women and the termination of countless precious lives.