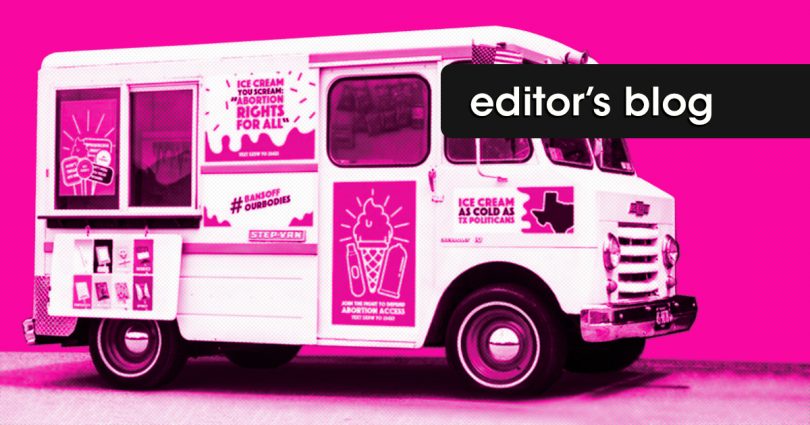 Nothing says fun in the sun like a good old-fashioned ice cream truck. Unless of course that ice cream truck is brought to you by Planned Parenthood and peddles abortion and condoms.

Yes, in protest of Texas’ recent abortion restrictions, PP’s abortion ice cream truck has been traveling around the state handing out condoms and encouraging people to scream for abortions. Its façade is riddled with messages such as “ice cream as cold as TX politicians” and “abortion rights for all.” Various images include a pregnancy test and different “flavored” or textured condoms on an ice cream stick.

In an attempt to draw attention to the truck, Alex McGill Johnson—the CEO of Planned Parenthood—tweeted this weekend: “Ice cream, you scream, we all scream for abortion rights! Catch us around SXSW and stop by to grab some free Bans Off swag, condoms, and education on the cold hearted [sic] policies of the Texas legislature.”

We shouldn’t be surprised at this latest attack on families and babies by the number-one abortion provider in the US, but we should never allow that lack of surprise to lead to apathy. This type of display should enrage and disgust us. And then it should spur us to work even harder to protect the family. This starts with protecting babies. As we do this, we must know that we are not alone. We have someone special we can go to with our prayers.

This weekend, we celebrate the feast day of one of the most important men in Catholic history—a man who is the epitome of what a father and husband should be. A man we should go to with our prayers and supplications when we see these attacks on the family, for he understands all too well the need to protect the family.

St. Joseph has no recorded words in the Bible, but his actions speak louder than any words ever could. We don’t need to hear the words of St. Joseph to understand the kind of man he was. We have read about his actions. We know that he was gentle and compassionate, for upon hearing about Mary’s pregnancy, he decided that, instead of shaming her, he would end the engagement quietly.

We know that he was obedient, for when an angel appeared to him and told him that Mary was carrying the Son of God, Joseph married her and raised Jesus as his own son. We see another example of this obedience when he followed the commands of the angel and fled to Egypt in the middle of the night, and again when they safely left that country. We saw Joseph’s love for Jesus in the fear he exhibited when Jesus went missing at the age of 12. We know he must have felt relief upon finding Him in the temple.

The family is the cornerstone of society, but constant attacks by PP and its like-minded supporters chip away at that foundation. And it’s not even a subtle chipping away. This blatant disgust and disregard for families is insidious and threatens to swallow our society if we do nothing.

If we dismiss nonsense like PP’s latest gimmick or simply roll our eyes and move on to the next story without taking action, we stifle the voices of those preborn babies who desperately need our protection. That is why we must, like St. Joseph, be people of action. And he is here to help us as we work toward sowing the seeds of love and respect for the family.

Contrary to PP’s slogans, it’s not the coldhearted TX politicians we should worry about. It’s the coldhearted abortion advocates who don’t understand the immense gift of every child and who care more about killing children than protecting them.

That is the truth of abortion. Those dead babies are why we need St. Joseph’s intercession now more than ever. Let us turn to him in prayer in our time of need, and let us never stop giving voice to the babies who have none.

This article first appeared in LifeSiteNews at lifesitenews.com/opinion/planned-parenthood-is-handing-out-condoms-from-an-ice-cream-truck-in-texas/?utm_source=top_news&utm_campaign=usa.