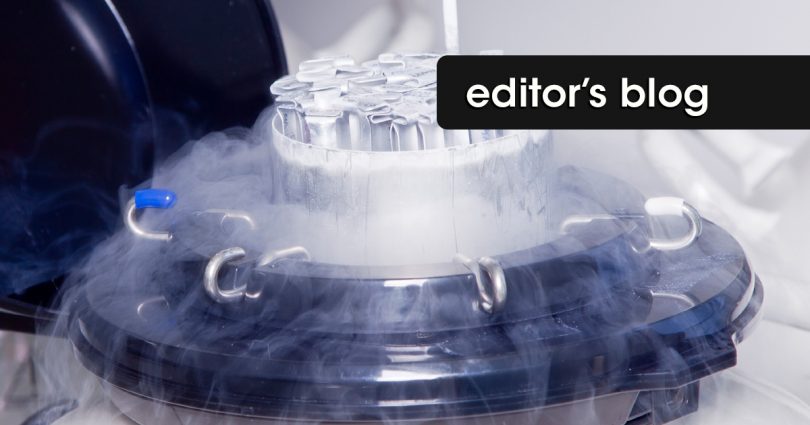 In a nutshell, the story centers around a loving couple who were unable to conceive. So, in 2017, they adopted an embryo that had been frozen for 24 years. Nine months later, they gave birth to a beautiful baby girl. Then, earlier this year, they adopted another embryo—their daughter’s biological sister—and gave birth in October. That baby now holds the world record for the longest frozen embryo to be birthed.

Adopting embryos and giving birth to a tiny baby who has spent his/her entire existence frozen is a beautiful gift—for both the adoptive parents and the babies.

But adoption aside, the idea of tiny children being frozen, sometimes indefinitely, is very disturbing.

Children are an immense gift, and when couples face infertility, it can be devastating. These couples know they have so much love to give, but for some reason cannot conceive. Instead of adoption, foster care, or morally licit fertility treatments, many of them—hoping to conceive a baby of their own—turn to in vitro fertilization, not always understanding the realities or the repercussions.

But, for many reasons, our faith teaches that IVF is morally wrong. According to the Catechism of the Catholic Church, “IVF dissociate[s] the sexual act from the procreative act. The act which brings the child into existence is no longer an act by which two persons give themselves to one another, but one that ‘entrusts the life and identity of the embryo into the power of doctors and biologists and establishes the domination of technology over the origin and destiny of the human person. Such a relationship of domination is in itself contrary to the dignity and equality that must be common to parents and children.’”

Furthermore, it is often the case that IVF creates multiple embryos. What happens when the couple only wants to implant one or two of the many who are created? Where do the others go?

They go into the freezer, down the drain, they’re used for experiments, or in the case of the two little girls mentioned above, they are adopted.

However, far too few are adopted. And so they live in a tube in a perpetually frozen state. Yes, parents can have them frozen indefinitely. They simply need to continue paying for storage.

According to the article: “Dr. Brian Levine, practice director of Manhattan fertility clinic CCRM, told The Post that frozen embryos do not have a known shelf life. Still, it is important to consider that those put on ice in the 1980s and 1990s ‘have potential for degradation over time’ since the ‘slow freeze’ technique used by specialists back then could ‘create vulnerabilities.’”

It almost sounds like we’re talking about a piece of meat rather than a baby. But that is what happens when human beings become commodities.

We cannot create people and then store them in a freezer or discard them like trash. This goes against everything Christ taught about human dignity.

So while these two young girls had a happy ending to their frozen state, we have to wonder about the countless babies suspended in cryogenic tubes, awaiting the opportunity to grow.

When will our society see that IVF is an unjust practice that imprisons or throws away tiny babies? Medical procedures should uphold the dignity of the human being, not threaten it.

Just because we have the capability to create babies through IVF does not mean that we should.