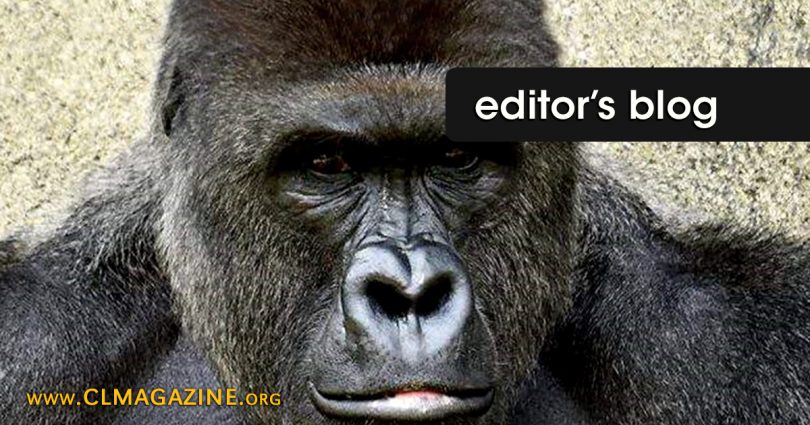 Mainstream media has covered the story of Harambe and the 4-year-old boy (Isaiah) extensively since the incident occurred on May 30, 2016. Much of the coverage has treated Harambe (the gorilla) and Isaiah (the boy) as ontologically equal. Such coverage has even attributed altruistic intentions to Harambe, explaining how “[a]stonishing new footage shows gorilla ‘PROTECTING’ boy and hold his hand before being shot dead” (see here)  and how “the two shared a surprisingly tender moment when the four-year-old reached for Harambe’s arm and the two briefly held hands” (see here).

These same media outlets have covered other stories of gorillas in the past several years. For example, in April 2015, these sources told the story of an angry gorilla that tried to “attack a family” (see here) and charged at a little girl so fast that it smashed the glass of its enclosure (see here); in March 2016, the same sources told the story of Kijito that “charged man taking selfie at zoo” (see here) with clenched fists, apparently using a rock to give itself more momentum (see here). These gorillas went from more or less calm to lethally aggressive in a second.

The Harambe footage shows a gorilla oscillating between restraining a little boy and roughly handling him. Harambe forcefully dragged Isaiah by his ankle through a moat, causing the boy’s head to go under water; abruptly flipped Isaiah to his feet; shoved him in the back; and then grabbed the back of the boy’s shirt to drag him down the moat again. How are any of Harambe’s actions an indication of the gorilla’s intent to protect and share a tender moment? They are not; these media outlets have ignored or explained away the majority of the footage, ignored their own past coverage of violent gorillas at zoos, and focused on a few screenshots where the gorilla is incidentally grabbing the boy’s hand to paint a fictitious picture based on a misguided emotional notion that animals and humans are equal.

It is never a problem for mainstream media when facts and evidence contradict its agenda. You see, the story can be invented! Just find a suitable screenshot and tell the imaginary story of what the saintly gorilla was thinking, feeling, and trying to accomplish before those blasted human beings dared to protect their own species by killing the good gorilla inhumanely…or “in-gorilla-ly.”

What is more astonishing, however, is not so much when mainstream media takes screenshots and video clips out of context—as with Harambe—but when it dismisses videos, which provide their own context, on the grounds that the videos have been deceptively edited. The Center for Medical Progress’s videos exposing Planned Parenthood show long, uninterrupted segments of PP employees haggling over the price of body parts and describing altering abortion procedures for better specimens. A forensic analysis has even shown how the videos have not been deceptively edited, but this has been ignored (see here).

The cruel irony is that mainstream media treats animals and humans as equal, but treats some humans as superior to other humans when addressing abortion. Manipulating material and spinning it to tell the imaginary story of Saint Harambe the Martyr is acceptable, but videos, like the Center for Medical Progress’s ones exposing Planned Parenthood’s abhorrent and illegal practices, are unacceptable; in fact, PP, and mainstream media following the organization’s convoluted script, claims that the Center for Medical Progress’s videos have been deceptively edited, despite forensic evidence to the contrary.

Amidst this sea of media lies and deception where material is edited in favor of agenda while non-edited material is deceitfully dismissed as edited, PP has gone one step farther. They have found a sympathetic prosecutor and runaway grand jury to indict the creators of those videos exposing the horrors of PP in an attempt to (1) shift the focus away from those videos and the incriminating evidence they offer, and (2) scare anybody from ever trying to expose PP and its abhorrent practices again. Make sure to read Rita Diller’s informative article, “Texas Grand Jury Indicts Whistleblowers Instead of Planned Parenthood,” about this sordid affair.