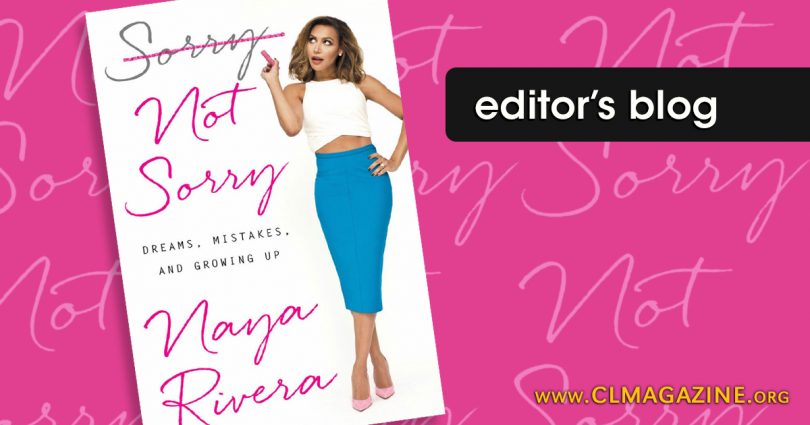 Naya Rivera, an actress/singer known for playing Santana Lopez on Glee (aired on Fox from 2009-2015), has recently released a book entitled Sorry Not Sorry: Dreams, Mistakes, and Growing Up.

She explains to USA Today the following about her book:

When I wrote my memoir, Sorry Not Sorry: Dreams, Mistakes, and Growing Up, I wrestled with the idea of whether to share the most difficult decision I’ve ever made — to have an abortion. The issue of women’s reproductive rights is impossible to sum up in 500 words or less. Hell, we haven’t been able to reach a consensus about it in 50 years (see here).

Rivera had the abortion because her child interfered with her desire to pursue her career. At the time, she hid the decision from the child’s father; she has now revealed that decision to the world, ostensibly to honor three women: her grandmother, who worked at Bread and Roses abortion clinic where she counseled women through their decision to abort; her mother; and her niece. Both her mother and her niece also worked at the abortion clinic.

G.K. Chesterton is often quoted as having said, “Moral issues are always terribly complex for someone without principles.”  These words shed light on Rivera’s that “[t]he issue of women’s reproductive rights is impossible to sum up in 500 words or less.”

Based on the principle that killing human beings is wrong, the truth about “women’s reproductive rights” and abortion can be summed up in way less than 500 words. It can be done in just 6: “Abortion ends a human being’s life.”

Rivera’s narcissistic memoirs telling the world that her desire for a career in the spotlight outweighed her love for her child’s life will not make this any less so.