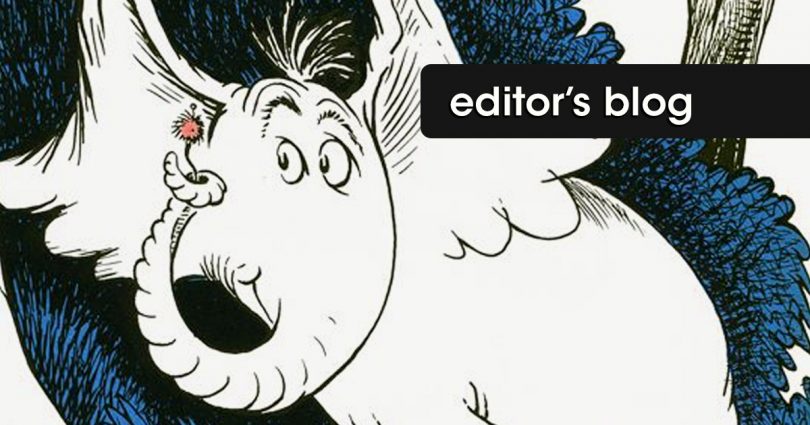 We can all learn an invaluable lesson from Dr. Seuss’ Horton Hears a Who!

Recall the story: Horton the elephant encounters a speck of dust floating through the air. From that speck, he hears the panicked Whos and vows to help them. Facing destruction, the Whos realize that they must speak up to defend themselves. They yell and scream, yet it is not enough. Frantically, the mayor runs through town, searching high and low for anyone not making noise. And “just as he felt he was getting nowhere, and almost about to give up in despair,” he encountered little Jo-Jo—a young man who stood silently, not adding his voice to the cry for help. The mayor takes Jo-Jo to the highest part of the town, shows him the people, and tells him: “Open your mouth. For every voice counts!”

And, though Jo-Jo was small, his voice “put it over.” The united voices of the Who were finally heard, and their lives were spared.

One voice can make a difference.

It seems a lot of people today have lost hope in our society and in our government. And there is a lot to lament. But we cannot be like the silent Jo-Jo. We cannot sit quietly and ignore our suffering brothers and sisters in Christ as they cry for help.

Take what’s going on in New Mexico right now. New Mexico could soon be a dangerous state to live in if you’re elderly or near death.

An assisted suicide bill has just passed the House Health and Human Services Committee (controlled by the Democrats) and will now move to the House Judiciary Committee. The Senate (also controlled by Democrats) is considering a parallel bill. The state’s governor will likely sign it if it comes to her desk.

According to the Catholic News Agency: “The bill allows licensed physicians, licensed osteopathic physicians, licensed nurses, and licensed physician assistants to prescribe a lethal drug to people with a terminal illness and the ability to self-administer the drug. The medical professional must determine that the individual has the capacity to give informed consent. At least two witnesses must sign the request for assisted suicide, as must the patient.”

Furthermore, the bill requires that all patients in hospice be offered assisted suicide.

Offered? Or coerced into thinking that’s their only or best option?

When elderly people and their caregivers face imminent mortality, they can find it difficult to think clearly. They often feel pressured or persuaded to do something they don’t actually want to do—and something the dying person’s relatives will later regret.

We know that assisted suicide is a grave sin and is morally unacceptable. We are never to do anything to hasten death—even by a minute. God is the author of life, and only He can call us home.

Those who teach this don’t realize that we all have inherent dignity. And dying will neither increase nor decrease that dignity.

We have dignity because we are children of God. And as children of God, we must respect and care for others—from creation until a death that is never hastened.

As the Catechism says: “Those whose lives are diminished or weakened deserve special respect.”

That respect must lie in caring for the sick person, in tending to his needs, in listening to him as he speaks of his pain—both physical and emotional—and of acting in the person of Christ. Respect is helping a patient understand that he is not a burden.

Respect is not telling a family member that the world would be better off without him. Respect is not pushing him toward a death that is not yet ready to come.

As Galatians 6:2 tells us: “Bear one another’s burdens, and so you will fulfill the law of Christ.”

The elderly, the sick, and those nearing death deserve our love, our support, and our care. We must help them carry their cross, not drive the nails in deeper.

The mayor of Whoville felt he was getting nowhere. He was about to give up. But he kept searching. And this search resulted in the voice that would make a difference.

Like the mayor, the vulnerable in society are searching for that one voice that will make a difference.

That voice is yours.

Do not give up! Use your talents to speak against the culture of death that has gripped our society. Use your words to tell others that you value them. Use your actions to spread the love of Christ. And use your voice to speak out against unjust laws like this one in New Mexico.

Never forget that you can make a difference.