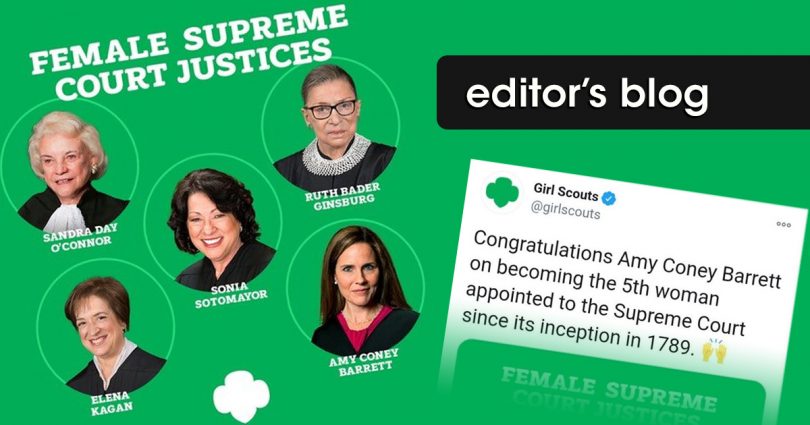 What do a God-fearing career woman with seven children, an organization for girls, and a sorority have in common?

One would think that the latter two should fully support and admire the woman who puts God first, then her family, and still has time for a successful career. That’s a lot to accomplish! Talk about empowering, right?

Of course, I am referring to the newest associate justice to the US Supreme Court—Amy Coney Barrett.

Barrett is the epitome of Catholic feminism.

When we talk about Catholic feminism, we must remember that we were all wonderfully created by God with a specific purpose in mind. Though women have not always been treated well or equally in the world’s storied history, we must see males and females as God created us. God created man and woman to be different—to complement each other. Women are equal with men, but they are not the same. Women can do things men cannot do, and men can do things women cannot do. There is no shame in understanding that our bodies are different. That is the way we are supposed to be. That is one of the things that makes us special.

Because women have the incredible gift of the ability to carry and bear children, they also face certain challenges when trying to work outside the home. Some women have loving husbands who help. Some women are raising children all alone. Many women struggle. But these women all share one thing in common: They are mothers. And they deserve support. They deserve love. They deserve respect.

St. John Paul II said it beautifully in his Letter to Women when he stated: “Thank you, women who are mothers! You have sheltered human beings within yourselves in a unique experience of joy and travail. This experience makes you become God’s own smile upon the newborn child, the one who guides your child’s first steps, who helps [him] to grow, and who is the anchor as the child makes [his] way along the journey of life.”

He continued: “Thank you, women who work! You are present and active in every area of life-social, economic, cultural, artistic and political. In this way you make an indispensable contribution to the growth of a culture which unites reason and feeling, to a model of life ever open to the sense of ‘mystery,’ to the establishment of economic and political structures ever more worthy of humanity.”

So it was with great pride that I watched Amy Coney Barrett—a fellow Notre Damer—be sworn in as an associate justice of the Supreme Court. Here is a mother to seven children who has worked all her adult life to uphold the law, to administer justice, to adjudicate fairly, and to be a good mom. And she has done so while staying true to her Catholic faith.

But because she is not pro-abortion, she has been mercilessly attacked in the media and by groups who fear she will threaten a woman’s “right” to kill her preborn child.

Even innocuous congratulatory messages have been attacked by pro-aborts who want nothing more than to create fear and hatred.

For instance, the Girl Scouts posted a message on social media congratulating Barrett for becoming the “5th woman appointed to the Supreme Court since its inception in 1789.”

Here an organization for girls is lauding the success of a woman and a mother, and it caves to the woke backlash spouted by women who want one thing—the ability to kill a preborn baby. In response to the GS post, a CNN analyst stated: “Why the post, knowing how divisive it is at this moment?? . . . Sorry but this was weird and tone deaf.”

Divisive? Weird and tone deaf? Not sure how an organization for girls congratulating a woman for being one of five women in 231 years to serve on the country’s highest court is any of those things. Shouldn’t girls aspire to accomplish things that women were once not able to do? Whatever happened to telling girls they could do anything they want and encouraging them to follow their dreams?

In addition, actress Amber Tamblyn said the Girl Scouts’ post was “really disappointing and [it] won’t age well when access to safe abortion and the healthcare needs of millions of women and girls is gutted in this country because of Barrett’s addition to the court.”

Abortion is not healthcare.

But did the Girl Scouts defend its post? Did it come out and say: “We are proud of this woman for successfully balancing her home and work life”? No. It retracted the tweet, stating in part: “[The post] was quickly viewed as a political and partisan statement which was not our intent and we have removed the post. . . . We are neither red nor blue, but Girl Scout GREEN. We are here to lift up girls and women.”

Would the organization have done the same if Barrett had been of the same ilk as RBG? Would there be all this fury? I think not.

Any Girl Scout who saw the original post and felt proud or who felt that the message resonated with her dreams and desires was quickly made to feel unequal. And that is the antithesis of the feminism women should strive for.

Then we see this same issue with a group of sorority women—a sorority that Barrett was once part of!

Kappa Delta posted a congratulatory message that said: “KD alumna Amy Coney Barrett was nominated to serve on the Supreme Court. While we do not take a stand on political appointments, we recognize Judge Coney Barrett’s significant accomplishment. We acknowledge our members have a variety of views and a right to their own beliefs.”

But the sorority received so much backlash that it, too, removed its post.

In a statement, the sorority said: “To our sisters and others who were hurt by yesterday social media post or subsequent removal, we are deeply sorry. Our approach was disappointing and hurtful to many.”

What could be so hurtful about what the sorority said? Nothing!

Women, remember this. The family is the cornerstone of society. We cannot keep killing our children and expecting society to thrive. We cannot tell women they can only succeed if they are not “burdened” by a child. A child is a gift to be treasured. A woman’s ability to bear a child is a unique gift that no man has.

People in the media and in Hollywood are trying to create division and dissent. A society divided against itself cannot stand. Indeed, it will crumble.

We understand that many women feel that they have no choice other than abortion. Pro-lifers help them see that there is another choice. They help them understand their value and see the gift that is a baby.

If we want to truly empower women, we must give them the tools they need to be their best selves. We must help them through the unplanned events in life. Pushing abortion and telling women that they can only achieve their dreams if they abort is a cop-out. It’s helping women run away and hide instead of allowing them to grow, mature, overcome, and adapt. And it’s setting them up for regret and pain.

As St. John Paul II said: “Women will increasingly play a part in the solution of the serious problems of the future: leisure time, the quality of life, migration, social services, euthanasia, drugs, health care, the ecology, etc. In all these areas a greater presence of women in society will prove most valuable, for it will help to manifest the contradictions present when society is organized solely according to the criteria of efficiency and productivity, and it will force systems to be redesigned in a way which favors the processes of humanization which mark the ‘civilization of love.’”

A pro-life, pro-family woman on the Supreme Court serves as a model to us and to our daughters. No one should ever feel ashamed when congratulating her accomplishments. Women can accomplish what they set their minds to. If the woke mob stays out of the way.