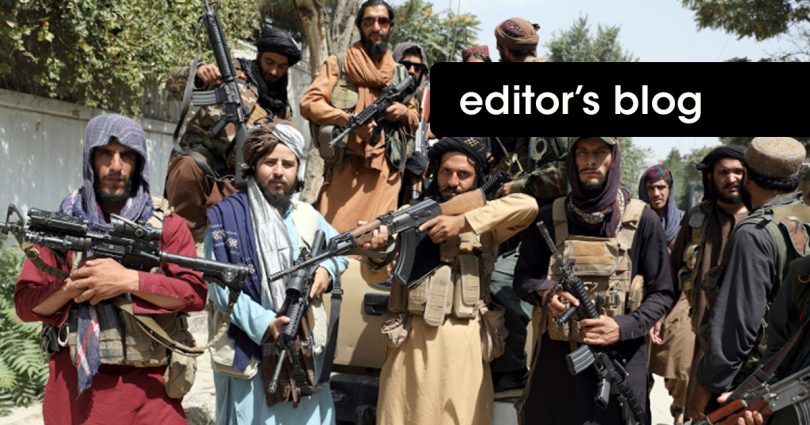 Whatever increases ratings and gets people to read or watch the news seems to be the modus operandi today. People can say anything and make nonsensical comparisons, and those who blindly follow, do not think, or fail to look at logic and truths will nod their heads and become indignant—and then pass the story on.

The tragedy unfolding in Afghanistan is unbearable to watch. The Taliban’s takeover of the country is a dismal example of what happens when we do not look out for and protect our younger brothers and sisters.

However, to compare pro-life people to the Taliban is not only blatantly wrong, but a disgusting display of ignorance. And it’s said with the explicit purpose of getting people riled up and angrier than they already are.

Let’s look at some examples.

Dean Obeidallah, an MSNBC opinion columnist, stated in a recent article: “The Taliban aren’t the only ones trying to impose their will on women’s bodies and choices.”

I have to wonder where these voices were when extremists, based on a narrow reading of their religion’s beliefs, enacted a law that forces a woman who was raped to carry the fetus of the rapist to term? That same law makes it a crime for anyone to assist that woman in trying to abort the rapist’s fetus. . . .

Look, nobody is saying the GOP and the Taliban are equally bad. But in just the past few months, we’ve seen Republicans champion measures to deprive women of freedom over their own bodies. . . . And they’ve done so, at least in part, to impose their religious beliefs on all others.

Another example also comes from MSNBC. Host Joy Reid had Frank Schaeffer—the son of the late evangelist Francis Schaeffer—on her program to discuss the new law in Texas restricting nearly all abortions in that state. Here are just a few of Shaeffer’s comments from that interview:

We have a situation in Texas right now tonight where the American Taliban, because that’s what it is, there’s not an American evangelical right-wing movement, there is an American Taliban that is weirdly similar in so many ways to the Middle Eastern Islamist terrorists. . . .

Today, there is no evangelical political movement. There is a new American Taliban and their goal is theocracy which means to take our religious beliefs, which for them are Old Testament Law, not Christianity, and force secular Americans, non-evangelical Americans, progressive Americans, women, people of color, into that box.

If these statements weren’t all so utterly false and ridiculous, they would be comical. But they are far from comical because people actually believe them.

There is nothing remotely similar between pro-lifers and people who oppress, abuse, and murder innocent people, women, and Christians.

Pro-lifers are not and have never been anti-woman. We love both moms and babies. That is why we try to protect them both from abortion. We know how devastating abortion can be for a woman, even 10-20 years after the fact. And we know that abortion always kills a baby—roughly half of whom are girls. That’s not religion. That’s simply science!

Further, the existence of thousands of pro-life pregnancy centers in the US proves the love that pro-lifers have for both moms and babies. These places support moms by giving them baby items, help with bills, opportunities to further their education, and even a place to live!

And as far as imposing our religious beliefs on others? You don’t have to have a faith in God to understand science and to want to protect babies from the horrible death of abortion. There are many secular groups filled with people who don’t believe in God but who understand that abortion takes a baby’s life.

Furthermore, many of society’s laws are based on the 10 Commandments—thievery and murder the two that come to mind immediately. We cannot just go into a store and take whatever we want without paying. Likewise, we cannot walk up to a person and shoot him. Laws based on a respect and reverence for the life and the well-being of our fellow man are what help keep our societies civil.

Schaeffer’s comment about pro-lifers’ beliefs being devoid of Christian beliefs makes no sense either. Christ came to fulfill the promise God made to the people of Israel in the Old Testament. He taught the very same things and more that the Commandments stressed. Never would Christ have taught that killing a baby in an abortion was a woman’s “choice.”

The people who spout comparisons of pro-lifers and the Taliban are either extremely misguided or woefully deceptive. It’s time we stood up for ourselves and explain the facts:

These are Christian values. These are beliefs that seek to protect moms and babies from danger and death. And these are the truths that many people don’t want to see.