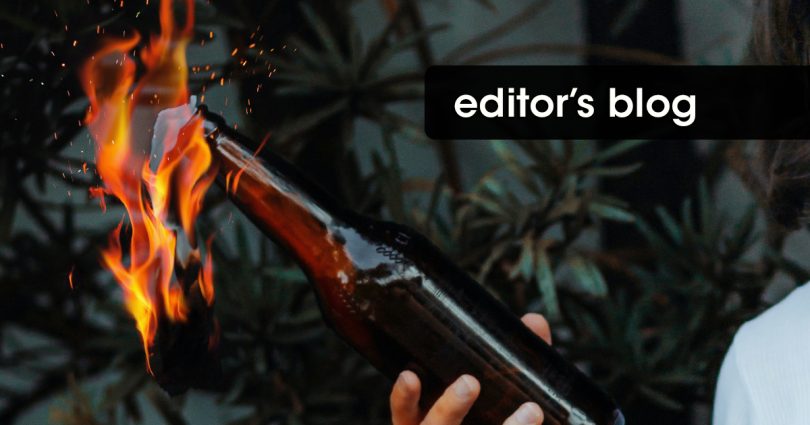 Violence. Child sacrifice. The death of tiny babies. Those words are bound to get people’s attention, especially in today’s world. Maybe they’ll also pull at the heartstrings of people whose hearts have been hardened to what goes on in our country 3,000 times each day.

When I say child sacrifice, I’m talking of course about abortion—today’s method of child sacrifice. In every abortion a child dies, and more often than not, it’s because that child’s mother felt scared or incapable of carrying the baby to term and caring for him after birth. Quite possibly she felt pressured into it or felt she had no other choice. It’s a sad situation, indeed.

But the violence of this kind of child sacrifice is not the only violence we see when it comes to abortion. Though killing an innocent child is devastating enough, we have also become painfully aware of the violence perpetrated by those who believe abortion is a woman’s “right”—the violence perpetrated against the pro-lifers who work so hard day after day to take care of the moms who are scared, to give them the encouragement they need, to supply them with material goods to make their lives easier, to help them further their education, and to show them that babies are truly a gift.

This kind of violence has been increasing exponentially lately, and it seems that some groups will stop at very little to show the world their anger. Take for instance the Night of Rage promised by the radical pro-abortion group Jane’s Revenge should Roe v. Wade be overturned and the abortion laws go back to the individual states to decide. In a communique to its “supporters,” the group allegedly wrote:

On the night the final ruling is issued—a specific date we cannot yet predict, but we know is arriving imminently—we are asking for courageous hearts to come out after dark.

Whoever you are and wherever you are, we are asking for you to do what you can to make your anger known.

We have selected a time of 8pm for actions nationwide to begin, but know that this is a general guideline.

Furthermore, a tweet from May 10 speaks of these threats of violence, stating that they will escalate and that the Molotov cocktail thrown into a Wisconsin pregnancy resource center last month was just a “warning.” We should expect more violence, they promise.

I feel 100% certain that this group and others like it mean what they say and that we will see an eruption of violence if SCOTUS does in fact decide to overturn Roe.

It’s a terribly frightening prospect, and I encourage everyone to be aware of their surroundings and to watch out for their loved ones once the decision is made. We have lived with the sanctioned killing of preborn babies for nearly 50 years, and these radical groups have grown to expect that this child sacrifice is simply an easy part of life—a “right.” For 50 years, the violence against preborn babies has been written off as a “good.” For 50 years, this child sacrifice has been touted as healthcare. And for 50 years, women have felt “liberated” knowing they could rid themselves of the baby should they become pregnant.

So, with their senses dulled to the sanctity of life, it’s no wonder that many of these groups advocate for and encourage violence against those who strive to protect moms and babies.

Violence is never the answer. Yet we see day after day in our country that people resort to violence whenever they get angry. Violence has permeated every aspect of society, and we can almost see Satan and his minions squealing in delight.

Yes, history tells us that violence is nothing new; the world has always known violence and child sacrifice. Just ask the believers in Moloch or the Incas or the Aztecs. But we are supposed to be more educated. We have more information at our fingertips than any generation before. We know more, so we should know better. But that doesn’t seem to matter.

These actions are what set us apart from those who perpetrate violence.

Christ told us to treat others as we want to be treated. We cannot control what others do, but we can control what we do and how we treat people. So as we get closer and closer to a SCOTUS decision, let us remember Christ’s love and His teachings, and let us spread His mercy to all who need it.

This article first appeared in LifeSiteNews at lifesitenews.com/opinion/pro-abortion-violence-is-nothing-new-pro-lifers-must-lovingly-continue-to-defend-the-unborn/?utm_source=home_opinion&utm_campaign=usa.