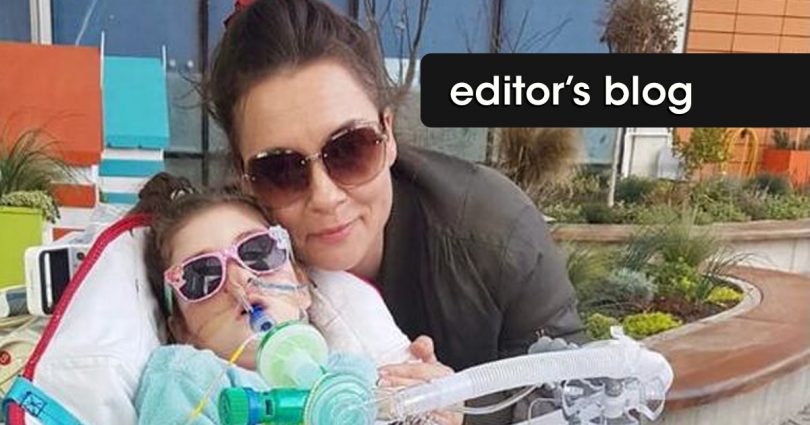 Little Pippa Knight is a brain-injured 5-year-old living in a UK hospital, where she has been for the past two years. Her mother, Paula Parfitt, has literally been fighting for Pippa’s life.

Pippa became sick the year after she was born and began having seizures, which resulted in brain damage and a worsening condition. She has been diagnosed with acute necrotizing encephalopathy—a “rare disease characterized by brain damage (encephalopathy) that usually follows an acute febrile disease, mostly viral infections.”

In December, the hospital made the decision to remove Pippa’s care, saying that, because she’s in a “vegetative state,” her life is “not worth living.”

Parfitt appealed the decision and was denied. She appealed all the way to the UK Supreme Court, which recently declined to hear the case.

Parfitt asked that she be allowed to take her child home and care for her until she died, but this was denied as well.

Now it seems that Pippa has very little time left.

There is a glimmer of hope, however; Parfitt is attempting to seek asylum in Canada, where Pippa might receive help. But no decision has been determined yet.

As we think about this tragic story, let us keep one word in mind: dignity.

Dignity is not something that only healthy people have. Or young people. Or those already born.

God created every single human being in His image and likeness. We all have inherent dignity.

St. John Paul II said it eloquently in Evangelium Vitae: “To claim the right to abortion, infanticide and euthanasia, and to recognize that right in law, means to attribute to human freedom a perverse and evil significance: that of an absolute power over others and against others. This is the death of true freedom.”

True freedom comes in loving as Christ loves and in giving of ourselves.

Taking power over another person’s life and ending it prematurely is putting yourself in the place of God. It is telling Him that His plan means nothing, that we know better than He, and that His children have little value in our eyes.

Though we cannot actually take away someone’s dignity, we do sometimes treat people with such contempt and disregard that they feel worthless. That is what we’re doing when we say that someone’s life is “not worth living” or that care for a sick person is a burden. We are making that person feel like he has no value—like he doesn’t matter.

And that’s one of the cruelest things we could do to another person.

Remember that Christ said that whatever we do to others, we also do to Him. We would never tell Christ that He is unworthy of our care, our love, and our adoration. Yet that is what we do when we say it to one of His children.

So, as we think about little Pippa and about dignity, let us remember all those who are sick, elderly, or not yet born. Let us also remember the words of Christ: “As I have loved you, so you also should love one another.”

And let us vow to show that love to others through our actions as we work every day to make others feel valued, respected, loved, and cherished.

This weekend, I have two challenges for you. Pray for Pippa’s family. And do something to acknowledge the dignity of someone in your home or community.