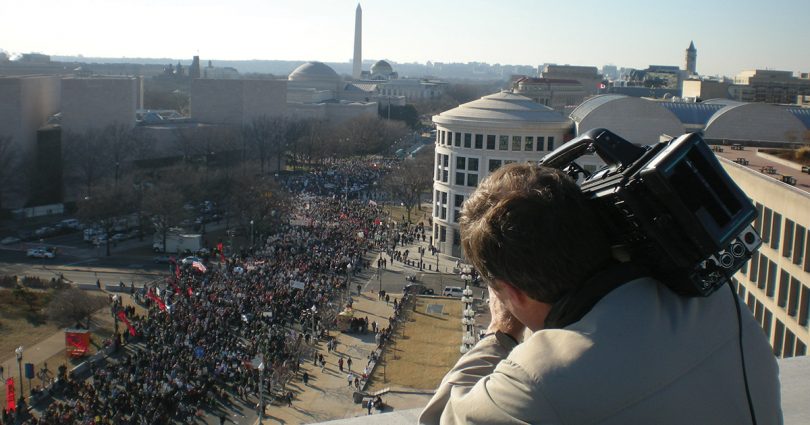 For Steve Sanborn, the last straw came the morning after the 2008 March for Life. The night before had been bad enough. Though the annual rally had drawn upwards of 250,000 from all over the U.S. and elsewhere to Washington D.C.’s National Mall for a happy, even joyous, day of speeches, songs, prayer and socializing, the coverage in the national news media was exactly zero.

In the next day’s newspapers, the event had again been virtually ignored. What coverage there was gave virtually equal billing to tiny knots of pro-choice counter-rallies. “It was offensive,” says Sanborn, a public relations consultant and fundraiser for a Kansas City nonprofit. “It was insane. It was unfair. I just got worked up.”

And worked up he stayed: as in staying the course through the instigation and production of a documentary film, Thine Eyes: A Witness to the March for Life, which pays less attention to the speechifying in order to focus on the ordinary, but highly diverse collection of Americans who filled the streets of the nation’s capital in January’s March for Life.

At first, Sanborn’s idea was simply to film the event from some rooftops to show the true, butnever reported numbers. And then, “to show all the young people…I bet 75 percent are under 25, while of course, the mainstream media want to portray the pro-life movement as an angry old man yelling at a 12-year-old.”

Sanborn took the idea to his old friend Jack Cashill, a documentary film producer (The Holocaust Through Our Own Eyes) and author (Hoodwinked). “He immediately lunged at the idea,” laughs Sanborn. Cashill, in turn, lined up the Kansas City production company he had worked with on previous projects, Outpost.

Cashill is a writer and marketer who was raised Catholic, left the Church and then came back to the faith during the making of a documentary film about a traditional Latin High Mass. Outpost’s Mike Wunsch is also an ardent pro-lifer who has an adopted daughter.

Cashill says that if the film was a good idea in 2008, it’s even more timely now in light of the murder of abortion doctor George Tiller. “Now the world needs more than ever to see the peaceful, prayerful face of the movement.”

Cashill also contributed the key concept that the film should do more than record the vast numbers turning out each year: It should tell a story. In fact, it tells three stories, following groups from St. Louis, Missouri, and Wichita and Atchison, Kansas, on their bus trips and marches within the big march.

The students from Benedictine College in Atchison come close to stealing the film with their enthusiasm, football rally-like pro-life cheers and thoughtful comments. But they almost weren’t in the film. The producers first approached the University of Notre Dame. Then as filming drew near, the university administration grew increasingly camera-shy, insisting on a liability insurance policy and editing rights. “They didn’t really want to be in a pro-life film,” surmises Cashill, even though several busloads of Notre Dame students attended the march. On his web site, Cashill speculates that administrators were leery of publicity that might deter President Barack Obama from making his nownotorious visit to the campus.

While the film focuses on the three bus groups, it also shows the diversity of the marchers. “They come from every ethnicity and religion,” says Sanborn. The cameras catch bikers, New York rabbis, Anglicans, Lutherans, Polish seminarians and women who’ve had abortions (including Thine Eyes’ narrator, actress Jennifer O’Neill); as well as “just well-adjusted, ordinary people” from all over America. “They are not angry; they are not violent,” says Sanborn, “They may be heartsick and a little frustrated.”

If anything, they are winsome and passionate, like the young woman from Massachusetts, who, during an interview with O’Neill, volunteers that her own birth was problematic to the extent that doctors “suggested to my parents it would be easier on them if they got rid of me.” “And look at you now,” says O’Neill. “I’m perfectly healthy,” agrees the girl.

The film as testament to faith

In standing up to the (media) powers that be, Sanborn is repeating a second theme from his early years. The product of a strong Catholic family in Tacoma, Washington, he remembers arguing his faith with teachers and even with his Jesuit principal. Once, when his teacher in senior government class challenged him on his pro-life stance, he went to his locker and brought back a picture of a partial-birth abortion. “What do you call that?” he asked the teacher, and getting no answer, said, “Well, I call it murder. And when you don’t call it murder in front of the class, you teach error.” This, at age 17.

To raise funds to pay for a fullbore marketing campaign, Sanborn is staging one-time showings for prolife groups, seeking free-will offerings of $20 per person (donors receive a DVD in return). Sanborn sees the film’s audience as the pro-life movement itself. “People who participate in the March only see their part of it, the 20 or 30 people around them. They don’t realize how big it is. Now they’ll get to see ‘I am not alone.’” But more than just inspiring those who already participate, he sees it as a recruiting tool for those who are sympathetic but see pro-lifers—as one young woman interviewed on the bus to Washington put it—“as the weirdo walking down the hall at school or some radical.”

Cashill says showings on EWTN will help, and he is looking for a “big player” in evangelical Protestant TV to champion Thine Eyes there.

Will it reach the mainstream?

Though Sanborn’s local PBS station has shown enthusiasm for the film, the producers don’t hold much hope for airtime on the other mainstream media. That raises the question: Why are the mainstream media so averse to covering the March for Life?

Mollie Ziegler Hemingway, a journalist who writes about religion for Christianity Today and how the mainstream media covers religion at www.getreligion.com, attributes this to several factors, some innocent and some not so innocent. “It doesn’t help that the [pro-life] movement does it every year and that it happens in the dead of winter when it’s not fun for reporters or a camera crew to be there,” she said. Annual marches lack newsworthiness. In contrast, she noted that pro-abortion groups hold events every 10 years, celebrating the major anniversaries of Roe v. Wade, for example. Also, the marchers for life are “overwhelmingly young. They go against type.” The “type” the mainstream media has in mind for the pro-life movement is, of course, a middle-aged, angry white man. “But the people at the March are pro-life, not just anti-abortion, and that doesn’t fit the narrative that a lot of reporters have constructed for this subject.”

Finally, she said, there is the news media’s pro-abortion bias, which permeates from the top down: from the assignment editors to the copy editors, to the reporters and photographers. Though clearly the abortion issue is not dead— Ziegler Hemingway pointed to the frenzied news coverage of the murder of abortion doctor George Tiller for evidence of that—the mainstream media is clearly unwilling to give space to views so different and opposed to their own.

“I know plenty of journalists with strong opinions on other issues who are able to put these aside and provide excellent reporting,” said Ziegler Hemingway, “but journalists seem less able to do so about abortion.” They are blind to their bias. She cited media studies by the Pew Research Center for the People & the Press, as well as others indicating journalists hold views far to the left of the general population, but see themselves as moderates. Astonishingly, said Ziegler Hemingway, the New York Times ignored the 2009 March for Life.