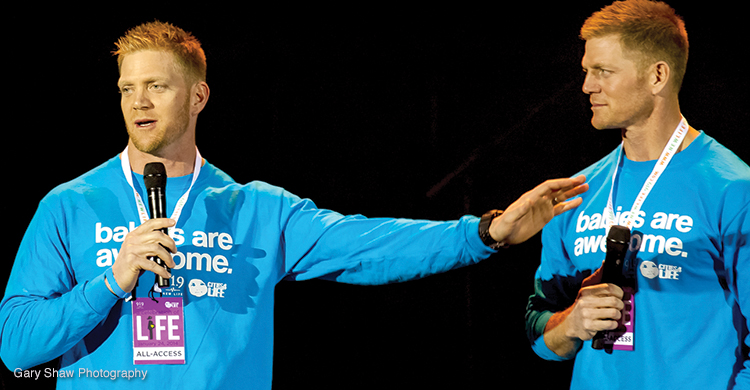 EDITOR’S NOTE: American Life League was honored to receive David and Jason Benham’s sponsorship and endorsement of this year’s National Pro-Life T-Shirt Week, held April 28 to May 4 (watch their promotional video at NPLTW). The famously entrepreneurial twin brothers made headlines last year when they refused to compromise their moral beliefs for the sake of fame and fortune. We were also honored when they grantedCelebrate Life Magazine this interview.

“Guys, I wish I had better news,” said the voice on the other end of the line, “but we have chosen not to continue with the show.” David and Jason Benham had spent the morning filming for their upcoming real-estate reality show, Flip It Forward. It was midday on May 7, 2014. With no advance warning and after 18 months of work toward the planned October air date, they had just gotten summarily axed.

The twin brothers took a deep breath. “Thank you for believing in us. Thank you for taking the chance and investing so much in us,” they said. “We love you guys, and you will all be a part of our story forever.” Although the cancellation felt like a kick in the gut, they meant every word of it.

HGTV had simply made a business decision, but a quick trip to the Internet would confirm what had precipitated it. The night before, a blogger on the Right wing watch website had posted an egregiously deceptive smear piece on them. In “HGTV Picks Anti-Gay, Anti-Choice Extremist for New Reality TV Show,” Brian Tashman had excoriated David and Jason, along with their father, Rev. Philip “Flip” Benham, who had nothing to do with the show but a lot to do with the spontaneous spleen venting coming down on HGTV and the Benham families.

But being a lightning rod because of their faith was not unfamiliar to them.

Lessons from their father

David and Jason’s father, Flip Benham, was a chain-smoking alcoholic by age 15. One night in 1975—he was in his late twenties, married, and operating his own saloon—he came home sickeningly drunk, whereupon his wife, Faye, then pregnant with the twins, told him she was leaving.

Flip sobered up quickly and asked what it would take to keep her. Her answer was simple: “You’re coming to church with me.” And so the following Sunday, Flip walked into a little Free Methodist church in Orlando, Florida, where, in his own words, he “got so radically saved” that his old life was completely over. He quit smoking and drinking that day, and sensing a call into ministry, enrolled in a seminary.

In 1980 he moved the family to Dallas, Texas, to start a church. David and Jason were five. These were the days of abortion center sit-ins that could provoke violent confrontations with law enforcement. One day, Flip decided to take his growing church out to see what was going on. While there, he heard pastors speak about the first moment of human existence and the lives of children who did not have a voice. He knew Christians were supposed to be a voice for the voiceless. “It was at that point that our dad’s heart became really broken for the unborn,” David recalled, “and our church became very involved in pro-life activism.”

And if the father was involved, so was the family. David described a searing scene from one particular rally held when he and Jason were around 10 years old. They saw hundreds of pastors and Christians on their knees, praying and singing hymns, while hundreds of protesters spewed slogans like “Keep your hands off my body!”—to the point of frothing at the mouth. They saw a police officer pummel their father and slam him into the gravel. “I watched his face just bleeding. He didn’t respond. He just laid there and took it.”

While neither of them, in a heated moment such as that one, made a conscious decision to do likewise, subconsciously this conviction took root: When it’s our turn, we’re going to stand. We’re not going to run.

Breathing life into their city

David and Jason grew up expecting to eventually serve God through some kind of ministry, but they were also outstanding athletes. They were both drafted by Major League Baseball right out of college, but after four seasons, each came to his own decision to retire: Jason, because of an injury, and David, because he felt God was calling him to leave the game. In an unexpected move that left his agent speechless, he turned down a contract with the Colorado Rockies to accept a job as a janitor at a Charlotte-area high school.

By this time they were both married, had growing families to feed, and felt unsure of what God was directing them to do. Still fresh out of baseball, they had little professional work experience, but they did have three things: a diligent work ethic, a commitment to do excellent work no matter how well (or poorly) they got paid for it, and real-estate licenses. They also had a lifetime of ministry training. “Our dad raised us not to be businessmen or even athletes; he raised us to be biblical thinkers. Armed with the truth of God’s word, we attacked the [real estate] marketplace with every ounce of our being, standing on nothing but the promises of God” (184), they wrote in their recently published book, Whatever the Cost: Facing Your Fears, Dying to Your Dreams, and Living Powerfully.

As their business and families grew, they also wanted to breathe life into their city. Their father had taught them not to wait for God to issue a specific directive when there was a clear need right before them, and Charlotte had three abortion centers. It was one thing to be against abortion; it was another to be actively pro-life. So they decided to gather all of the area pro-life ministries into a unified network. Then they attached those ministries to the actual abortion centers. And thus was born Cities4Life.

Through Cities4Life, volunteers go out to abortion centers every day they’re open, to truly give abortion-vulnerable mothers a choice. If a woman is interested in adoption, they help her pursue that option. If she doesn’t have a doctor, they have several who will treat her on a pro-bono basis. If she’s fearful because of domestic abuse, they have ministries ready to come to her aid. Since they started Cities4Life four years ago, more than 2,000 mothers have chosen life for their children. David says they’re the most pro-choice people out there (in the genuine sense of the word).

By 2011, the Benham brothers were successful, prominent businessmen. When the Democratic National Committee announced it would hold its 2012 convention in their city, they knew they had to do something, but they didn’t know what. So they started where they often start: in prayer. “As we prayed about what to do, an overwhelming sense of brokenness came over us. The more we sought the Lord, the more we realized the blame for our spiritual slide in America rested solely with the church—starting with us personally—even though our government was the easiest target for blame.” They knew that in biblical history, at times of crisis, leaders would call God’s people to a solemn assembly of confession and repentance, first for their own sins and then for the sins of the nation.

America also has a history of the same practice, so, knowing that judgment begins with the house of God, David and Jason started calling area pastors to an assembly in the spirit of 2 Chronicles 7:14: “If My people, who are called by My name, will humble themselves and pray and seek My face and turn from their wicked ways, then I will hear from heaven, and I will forgive their sin and will heal their land.” Accordingly, they named the gatheringCharlotte714.

“For us, this was an opportunity to be the church in our city, and not just go to church … if the church is a body, then being the church is paramount.” So that is how it came to pass that some 9,000 Christians representing a multiplicity of denominations, races, and backgrounds came out to pray at the Verizon Wireless Amphitheatre (now the PNC Music Pavilion) on September 2, 2012, the night before the convention was to get underway.

Charlotte714 would turn out to be a pivotal moment for the church in Charlotte, “because for the first time in our young city’s history, the church of Charlotte got together, instead of churches in Charlotte being churches,” David said. A unified body of believers, humbling themselves before God and interceding for their nation, began not with pastors but with area businessmen who were men after God’s own heart. It was at once a phenomenal event and a paradigm shift for Charlotte’s Christian community.

It also turned out to be a pivotal moment for David and Jason personally because, although they didn’t seek it out, they found themselves catapulted onto a national platform. After several media interviews, they received a call from a production company asking if they would be interested in being featured in a reality television show.

Charlotte714 also drew some ire. While it had clearly been a call to Christians to repent, and in many ways, had represented an indictment of the church, Tashman completely missed their point and turned the biblical principles on which Charlotte714 had been based into “anti-” positions. His September 6, 2012, post at Rightwingwatch.org, “Charlotte Prayer Rally Repents for ‘Homosexuality and Its Agenda That Is Attacking the Nation,’” was mentioned during HGTV’s vetting process, and Jason simply told HGTV, “we were anti-nothing.” The HGTV executives were satisfied with David and Jason’s integrity, and plans for the show went forward—until May 6, 2014, when Tashman got wind of it and posted the aforementioned screed, inciting a massive barrage of vitriol aimed at HGTV, which brought the show to an abrupt halt.

“If our faith costs us a television show, then so be it,” the brothers concluded in a May 8, 2014, statement on their website. At root, they knew it really wasn’t about them. It was about their stand for biblical values. “We hadn’t lost anything—we’d actually gained a whole lot,” Jason wrote in their book, “we were born for a time such as this, and it was an honor to follow Jesus whatever the cost” (179).

In Whatever the Cost, David and Jason tell some of their stories and share the principles that have forged their character. In a time when intense pressure is being brought to bear on Christians to abandon unpopular principles of the faith, this book is a deeply encouraging witness to remain faithful to our priceless Lord and His faithfulness rather than bend to the winds of cultural change—whatever the cost.

To learn more about the Benham brothers and their book, visitBenhamBrothers.com and WhateverTheCost.com.