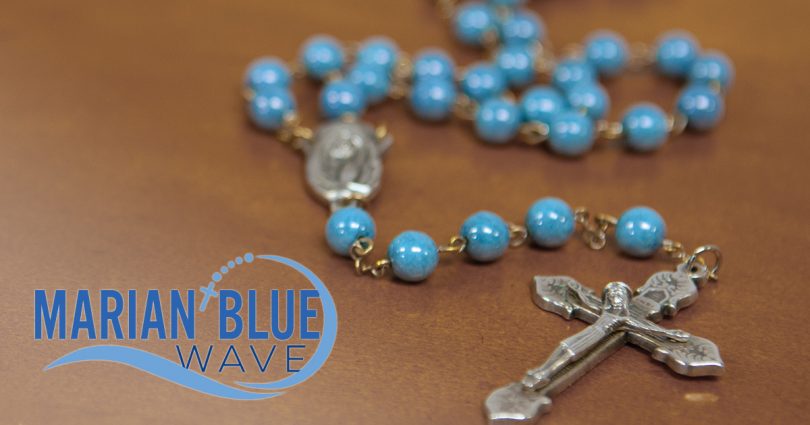 On October 7, 2019, American Life League launched what we believe is the most important movement we have ever created—the Marian Blue Wave. At its roots, the Marian Blue Wave is a call to Catholics across America to pray a weekly Rosary with the specific intentions of ending all clinical, chemical, medical, and surgical abortions and shutting down every Planned Parenthood facility in the United States.

The name of this effort came from a tweet by Bishop Joseph Strickland of the Diocese of Tyler, Texas, on January 26, 2019—days after New York’s governor, Andrew Cuomo, signed the most liberal abortion law ever. Bishop Strickland tweeted: “Let’s pray and work for a Marian Blue Wave . . . I’ll start with Texas!!!!”

Inspired by the positive energy Bishop Strickland stirred with his tweet, we immediately met with him and decided that American Life League would launch a Marian Blue Wave that would reach from one corner of this nation to the other.

The Marian Blue Wave is a call to action involving the praying of the Rosary with the specific intention of ending abortion. Our goals are many, but the first and most important one is to engage as many of our fellow Catholics as possible—especially priests and bishops—in projects to extol the virtues of praying the Rosary and to use it to advance a call to holiness and evangelization.

American Life League has, from its beginning, initiated many anti-abortion campaigns that relied on the major involvement of the Blessed Mother. One memorable effort began in 1997 when Bishop John Yanta was installed as head of the Roman Catholic Amarillo, Texas, diocese. When Bishop Yanta found out he had inherited 19 Planned Parenthood clinics in his diocese, he resolved to close them all. He assigned that task to Rita Diller, head of the Respect Life office. Since ALL had worked with Bishop Yanta when he was an auxiliary bishop in San Antonio, he asked us to assist.

Diller immediately began implementing techniques pioneered by STOPP, but added a significant element. Diller brought Mary, the mother of God, into the battle. She had pictures of Our Lady of Guadalupe carried—at one time or another—outside of every Planned Parenthood clinic. She, of course, also had the Hail Mary prayed at each facility.

Now more than ever, we need this effort because it has become clear that the biggest reason why so-called pro-life politics do not work is because few people realize that every abortion kills a child of God—a unique human being with his own DNA.

In his encyclical letter Redemptor Hominis, St. John Paul II wrote: “The Son of the living God speaks to people also as Man: it is His life that speaks, His humanity, His fidelity to the truth, His all-embracing love. Furthermore, His death on the cross speaks—that is to say the inscrutable depth of His suffering and abandonment.” Thus, we also pray the Rosary to remind ourselves of all that Jesus has done for us and how much we should be doing for Him.

In a webcast on the Feast of the Holy Rosary (October 7) attended by hundreds of dedicated fighters against Planned Parenthood, American Life League president Judie Brown announced this Marian Blue Wave. (The webcast is online and can be viewed by going to all.org/webcast.) In formally announcing the Marian Blue Wave, Brown stated:

We acknowledge the fact that the wounds abortion has inflicted are the source of immense suffering in our nation, in the Church, and in the hearts of the parents of the aborted. Like Christ, the preborn child suffers unto death during an abortion, abandoned by the very mother who should protect her. This injustice drives us to our knees before Mary.

Our nation will not heal any other way, nor will we make progress toward ending the scourge of abortion until we embrace wholeheartedly our role in these crimes and begin the quest to heal our nation through prayer and education.

Our goal is simple. With the grace of God and the intercession of His beloved mother, we pray the Rosary for the conversion of our nation, for an end to the killing of the innocent, and for repentance and healing. The Marian Blue Wave can accomplish this as long as we persist and rely always on the will of God.

What would our nation be like if millions of Catholics prayed the Rosary every day for an end to abortion? That is the Marian Blue Wave.

The specific goals of the Marian Blue Wave include shutting down every Planned Parenthood facility in the United States, shutting down every abortion facility in the United States, and exposing Catholics who advocate for or promote abortion in any way so that we can pray for them and reach out to each of them in love. Our goal is to change hearts by teaching the truth.

Our prayer petitions include:

A call to action

We have spent the last 46 years waiting for laws and politicians to end the senseless murder of innocent preborn children, and what has changed? Absolutely nothing. Well, enough is enough!

We would be naive to ignore the fact that abortion goes much deeper than laws and politics. Abortion is a grave evil, and an evil of this magnitude requires the greatest spiritual weapon available to us: the holy rosary.

The victories brought about through the rosary are legendary. Our MBW website has a video naming many of them. To me, the most startling was an account of Jesuit priests who survived the atomic bomb blast at Hiroshima, Japan. Below is their story, with some excerpts from “The Miracle of Hiroshima” from catholicnewsagency.com.

On August 6, 1945, the atomic bomb was dropped on Hiroshima, Japan. Around 80,000 people were instantly killed. Four Jesuit priests were near ground zero, “but they survived the catastrophe, and the radiation that killed thousands in the months following had no effect on them.” The Jesuits, “Hugo Lassalle, Hubert Schiffer, Wilhelm Kleinsorge, and Hubert Cieslik were at the rectory of the church of Our Lady of the Assumption.” Father Cieslik wrote that they “only sustained minor injuries from the broken windows.” The doctors who took care of them afterward warned that the radiation would produce serious lesions, illness, and premature death. However, no disorders ever developed. “In 1976 Father Schiffer attended the Eucharistic Congress in Philadelphia. . . . He confirmed that the other Jesuits were still alive and without any ailments. . . . The four religious never doubted that they had been blessed with protection by God and the Blessed Virgin Mary. . . . [The priests explained:] ‘We were living the message of Fatima and we prayed the Rosary every day.’”

Professor Charles Rice (a founding advisor of ALL) once wrote: “Our reliance here must be on the Rosary rather than the sledgehammer (and on other prayers as well, especially in ecumenical gatherings). . . . Only through the grace of God will we succeed in removing [abortion] from our land.”

Understanding the rosary’s power, those who join the MBW will say a Rosary once a week with the specific intention of ending abortion in the United States. No matter where you live, you can be a part of it.

When our participants commit to the MBW, a blue icon will appear over their city on our interactive map (marianbluewave.com/map). With enough participants, a visible Marian Blue Wave will sweep the nation.

Since the Marian Blue Wave was officially announced on October 7, 2019, the results have been beyond our wildest imagination.

Within a few days, over 1,000 individuals committed to saying one  Rosary a week. That number has increased daily, and as I write this article, over 2,000 have joined from 1,153 unique locations.

Our Blessed Mother quickly made it clear that this activity will not be limited to the United States, but will be a worldwide movement. People from all over the world joined the effort, and as I write this, we have supporters from 28 countries located on all six populated continents. In addition to the United States of America, Canada, and Mexico, the following countries are included: Trinidad and Tobago, Brazil, Argentina, United Kingdom, Ireland, Portugal, France, Belgium, Germany, Poland, Czech Republic, Italy, Croatia, Malta, Ghana, Nigeria, Kenya, South Africa, India, Japan, Philippines, Singapore, Fiji, Australia, and New Zealand.

The Marian Blue Wave has been endorsed by Cardinal Raymond Burke, Bishop Joseph Strickland, Bishop Michael Sheridan, and many other Catholic bishops who have assured us of their support and promotion of this cause.

More importantly, in the coming month, over 8,600 Rosaries will be said for an end to the killing of the innocent, for repentance, and for healing. In addition, we pray these Rosaries so that, with the grace of God and the intercession of His beloved mother, our nation (and all participating nations) will be converted.

Everyone on the planet can join the Marian Blue Wave. Simply go to marianbluewave.com/rosary and commit to saying one Rosary a week. It’s that easy.