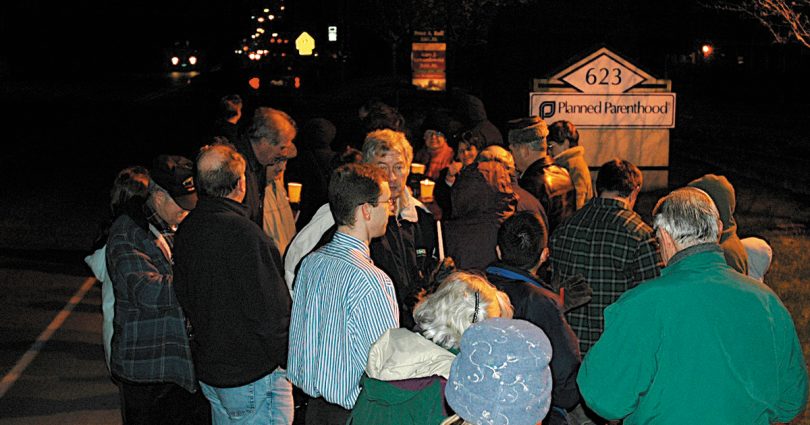 “This fall, the breakthrough campaign is being rolled out nationwide and you have an opportunity to play a part in this historic effort,” said David Bereit, national campaign director of 40 Days for Life.

The first 40 Days for Life campaign began in the fall of 2004 because a small group of pro-life activists in College Station, Texas was frustrated.

“The community around them seemed apathetic or indifferent about abortion,” revealed Bereit, who led the pro-life group. “Few volunteers were active in pro-life efforts. Numerous local churches were failing to ‘speak up for those who cannot speak up for themselves’ and the media largely ignored the pro-life perspective.”

The handful of pro-lifers held a prayer and brainstorming session and the first 40 Days for Life was planned as a way to overcome the local challenges in a focused period of time and to re-energize pro-life efforts.

Bereit explained, “The plans called for three components: 40 days of community-wide prayer and fasting, 40 days of a nonstop, round-theclock vigil outside the local Planned Parenthood abortion center and 40 days of aggressive educational outreach.”

Less than two weeks later, the first 40 Days for Life was launched.

The College Station campaign exceeded all expectations. In just 40 days, over 1,000 new pro-life volunteers were activated; more than 25,000 households were reached through a grassroots door-to-door effort; local, state and national news was generated; plus the local abortion rate was slashed by 28 percent.

In the months that followed, the momentum created in College Station began to spread to other communities, yielding similar results:

Spreading the impact across America

Leaders from the local campaigns began to realize that God was in the process of doing something amazing and started prayerfully discerning how they could share the blessings they had experienced with other cities and towns throughout the country.

The answer quickly became clear: a simultaneous, nationwide 40 Days for Life campaign from September 26 through November 4.

Now, pro-lifers in 33 states and the District of Columbia are activated. Every community in America is invited to join this national mobilization, which some pro-life leaders are saying could mark the beginning to the end of abortion in America.

You can make a difference

Your community could help to shape history this fall and perhaps God is calling you to be the one to step forward and carry the banner for 40 Days of Life in your hometown.

There are three simple ways that you can make a lifesaving impact as part of this effort:

Encourage them to pray and get involved. By doing these three simple things and by following God’s leading, you can save lives right where you live. If, for some reason, you cannot organize pro-lifers in time for the fall campaign, please consider another time of year such as Advent or Lent.

Bringing America back to life

What will God accomplish when communities across America pull out all the stops and unite together for 40 days to end the violence of abortion?

How will the pro-life movement be transformed?

How will the lives of mothers and their babies be saved from abortion?

How will your community be transformed?

What effect will that transformation have across the rest of our nation?

“Now is the time to find out,” Bereit said. “Join the vigil this fall and let’s make history.”

By Christine Melchor and Jason Ferguson

The prayer volunteer was hot. She’d traded in sitting down at a nice little café to eat the city’s best chicken salad sandwich with coworkers on their lunch break, for standing in the 95 degree summer sun at the Houston Planned Parenthood abortion facility. She’d been standing there for 45 minutes, praying and feeling a bit insignificant when Cindy pulled up. Cindy had circled the block three times now and, each time, had gotten a little bolder. On the fourth circuit, she pulled over and rolled down her window looking at the volunteer. As Cindy’s tear stained face came into focus, she began to tell her story, “I’d like you to meet my little girl.” She motioned to a mischievous looking three-year-old girl with curly black hair sitting in the back seat and said, “Her name is Rosie.”

It turned out that three years ago Rosie’s mom had an appointment at the Planned Parenthood abortion facility on Fannin Street in Houston, Texas and she was intent on exercising her “freedom of choice.” That day, as she was being escorted down the sidewalk, a young woman offered her a pamphlet. The woman told Cindy that she was praying for her and offered her alternatives to abortion. “They’re just protestors, ma’am, trying to spread lies, we have a trash can full of their stuff inside,” said one of the Planned Parenthood escorts, but Rosie’s mom kept the pamphlet.

“I thank God every day that woman was out there praying for me,” Cindy said as she looked at her daughter who had been scheduled to die. All of a sudden, the volunteer didn’t feel quite so hot, quite so hungry or quite so insignificant.

Little Rosie’s story is an actual account about one of the daily lifechanging events that occurred during the Houston Coalition for Life’s 40 Days for Life campaign conducted in the summer of 2006. It began in response to Planned Parenthood’s expansion plans that had already started in the city. Hundreds of pro-lifers from Houston and surrounding cities participated in the campaign that went around the clock, 24 hours a day for 40 days.

In addition to supportive e-mail from people in Texas, the coalition got word from kindred spirits across the country. People wrote to say that they were participating from afar with prayer and fasting. Thus, over 120 women were referred elsewhere for their pregnancy tests and many moms chose life for their unborn children during the course of that prayer vigil. The additional prayer warriors this campaign garnered had enabled the Houston Coalition for Life to start, on the 41st day, their Campaign for Life, which sought to have a person present in prayer every minute that the Planned Parenthood abortion facility is open.

With the media coverage obtained and the ads that were placed in college newspapers, much of the city was educated on Planned Parenthood’s expansion and deadly agenda. It is amazing what can happen when God’s people come together united with a common goal, offering their prayers and sacrifices for an end to abortion and then abandoning the results to Him.

The thought of conducting a campaign of this magnitude can seem very daunting, almost impossible. When the decision was made to go forward with it in Houston, it was given entirely to God and His people responded.

It was with great excitement and enthusiasm that the Houston Coalition for Life greeted the news of a national 40 Days for Life scheduled to run from September 26 through November 4, 2007. This campaign will be simultaneously conducted in front of Planned Parenthood locations and other abortion businesses across the country. Pro-lifers in Houston can’t wait to be a part of this spiritually enriching prayer vigil again.

If your city isn’t already actively planning on participating in this national campaign, please see www.40DaysForLife.com for information on how your church or pro-life group can get involved.