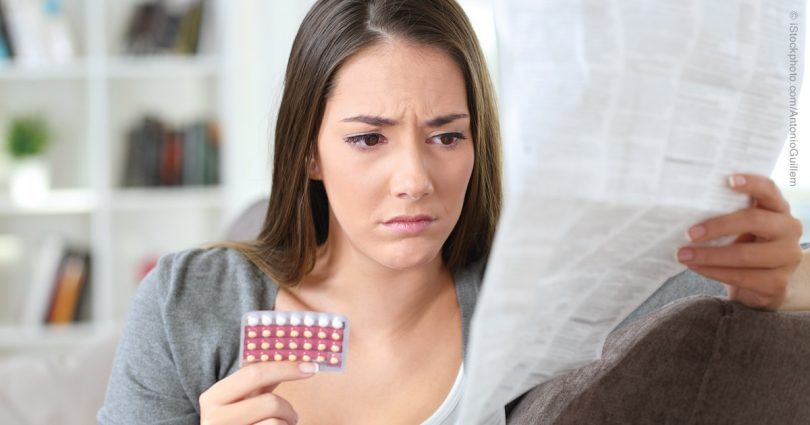 You are a different person on the birth control pill than you are when you are off the pill. And there’s no bigger deal than this.”   — Sarah Hill, PhD (author of This Is Your Brain on Birth Control)

If you listen to mainstream media, you will undoubtedly hear the benefits of birth control touted. Women can be “free.” They can have sex “without consequences.”

But what does this “freedom” get women? And are there really no consequences to the ingestion of synthetic hormones?

The glory of birth control is a lie. It is not the wonder drug that the pharmaceutical companies lead women to believe. Aside from the immorality, there are physical and psychological consequences as well—consequences rarely discussed with women in a doctor’s office. It is only through experience that women realize these effects. It is only through experience that they discover the dangers.

What is hormonal contraception?

Hormonal birth control includes the pill, injectables, the IUD, and the patch. The pill is a daily oral contraceptive that contains both estrogen and progestin. A woman takes the pills for three weeks out of each month. The final week is a week of placebos meant only to train her to continually take a pill. Injectables are shots of progestin intended to prevent pregnancy for three months at a time. The IUD—or intrauterine device—is a device placed inside the woman’s uterus to prevent pregnancy. Some are copper, while others contain progestin. The patch is placed on the skin and releases hormones into the body.

Hormonal contraception works in one of three ways. It prevents ovulation. It thickens cervical mucus to keep sperm from entering and fertilizing the egg. And it thins the lining of the uterus so that the recently created baby cannot implant. It is because of this manner that we call these types of birth control abortifacients. They cause the death of a very tiny baby.

In this article, we will refer mostly to the pill, as that is the form of birth control most women use. But all forms have similar side effects, all forms are morally unacceptable, and many can result in the death of a newly created baby.

Why is contraception a moral evil?

According to the Catholic Church, the marital act is meant to be both unitive and procreative. Of course, a baby can’t and won’t be created during every act, but the couple must be open to the gift of life that God might bestow on them, and they must never do anything unnatural to thwart this gift.

Contraception—meaning against a baby or against the creation of a baby—is a mortal sin because it reduces the conjugal act between a husband and a wife from an act where each gives of him/herself totally and completely to an act where one or both holds something back. And by holding back, each person—and even the act itself—is reduced from something beautiful and all giving to something utilitarian. The use of contraception tells God that you don’t trust Him, that you spurn His gift of life, and that you’re putting your wants and desires above His.

Further, the use of contraception, especially outside of marriage, debases the woman and allows her to be used for the sake of a man’s pleasure only. As St. Paul VI says in Humanae Vitae: “A man who grows accustomed to the use of contraceptive methods may forget the reverence due to a woman, and, disregarding her physical and emotional equilibrium, reduce her to being a mere instrument for the satisfaction of his own desires, no longer considering her as his partner whom he should surround with care and affection.”

When God created man and woman, He created us in His image and likeness. Though men and women are equal in His eyes, we are not the same. He created the two sexes to complement each other. We all have individual gifts, but women have some gifts that men can never have—specifically, the ability to carry a child.

Sadly, many people—and organizations like Planned Parenthood—teach women that this immense gift is the proverbial albatross around a woman’s neck. Society teaches that a woman must be allowed to do whatever she wants, even if that desire results in the death of her preborn child or in harmful physical and psychological effects to her.

Since the 1960s, when the pill became widely available in the US, women have suffered from its side effects. Many dismiss these side effects as nuisances or something that they have to put up with to keep from getting pregnant. But what happens when the side effects become perilous?

In May 2019, 10 doctors and researchers published a document entitled Petition on Hormonal Contraceptives.1 This group of professionals, who formed what they called a Contraceptive Study Group, had spent years evaluating birth control literature and examining and interpreting studies so that they could present warnings about the side effects in one comprehensive document. Not only did the group want to warn potential users, but it petitioned the government to add warning labels to the boxes and to include more information on the patient inserts so that women would know the truth about the chemicals they were putting into their bodies.

And what is this truth? Ingestion of synthetic hormones can wreak havoc on a woman’s body. Side effects include blood clots, heart attack, stroke, breast tenderness, elevated blood pressure, nausea, headaches, bloating, liver disorders, gallbladder disease, cancer, and even death.2

One look at the personal stories on the petition’s site is enough to chill your blood. The destruction these seemingly innocuous pills cause can be irreversible.

Doctors don’t usually tell women about the enormity of the side effects—and often doctors dismiss a woman’s concerns, so she is left to fend for herself.

In her eye-opening book about how the pill affects a woman’s brain, psychologist Sarah Hill, PhD, writes: “Changing women’s hormones changes women. . . . Research suggests that [the pill] probably has a hand in women’s mate preferences, our sensitivity to smells, our relationship satisfaction, the functioning of our stress response, the activities of multiple neurotransmitter systems, the activities of multiple hormones, our moods, our persistence in difficult tasks, our ability to learn and remember, and our sex drive. And this is probably just the tip of the iceberg. Our sex hormones influence billions of cells throughout our bodies—including a huge number of them in our brain—meaning that the effects of the pill on who women are, are likely to echo throughout their bodies from head to toe.”3

Hill’s book goes into great detail to help the reader understand the ramifications of the pill on nearly every part of a woman’s body. One of the things that makes this book so compelling is that the author is not morally opposed to the pill. She has done years of research and simply wants to present the facts.

And the facts are scary.

In addition to the side effects mentioned above, Hill recounts stories of women on the pill who disclosed feelings of sluggishness, depression, lack of concentration, decreased libido, an increased stress response, and even the fact that on and off the pill they desire a different type of man!

These are not minor side effects!

As Hill says, the pill “changes everything. . . . This includes things that seem to have nothing to do with sex. It changes how our digestive system works, what our microbiomes look like, how our immune system functions, what our other endocrine organs do, how our metabolism operates, and—of course—what goes on in our heads.”

Indeed, the pill changes everything. When a woman puts artificial hormones into her body, she is manipulating nature and impeding the way her body is intended to work.

Hormonal birth control is detrimental to both the soul and the body.

When in a relationship, each person must remember that love is wanting what’s best for the other person. If a man reads this information and still wants his wife to take the pill, he does not have her best interests in mind. He has his. And if a woman reads this information and still wants to take the pill, she is possibly setting herself up for numerous health problems.

This is not sex without consequences. This is not freedom. True freedom lies in taking care of your body and your soul in the way God intends.

So how do we raise future generations of people to not only understand the contraceptive mentality but to shirk it, especially when the pulpits are silent?

We must continually educate—in articles, in our speech, within our families, and on social media.

We must never pass up an opportunity to share the information we have with others. Their soul and their health depend upon it.