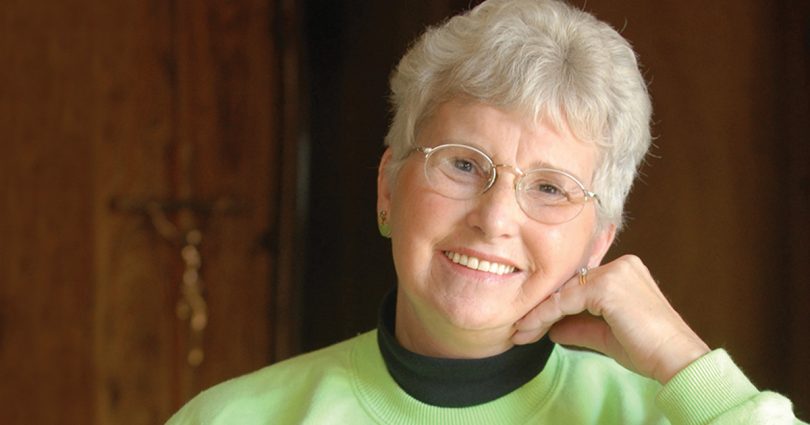 Every day, thousands of people die from cancer. For this reason, I often wear a shirt proclaiming “SURVIVOR: Adult Stem Cell Transplant.” You see, I am 65 and I have survived two bouts of cancer due to the grace of God and ethical treatments with my own adult stem cells. Therefore, I tell everyone I meet that there is no need to kill human embryos. I have written to newspapers and talk show hosts such as Oprah Winfrey and Montel Williams, but they are disinterested.

I also have written to many congressmen and senators. On March 13, 2007, I had appointments with various senators as they were considering the Stem Cell Enhancement Act, which called for the tax funding of embryonic stem cell research. That day, I wore my bright pink sweatshirt which says, “SURVIVOR: Adult Stem Cell Transplants NOT Embryonic.”

I traveled through Congress with my husband Bill; David Prentice, senior fellow for life sciences at the Family Research Council; some doctors who treat patients with adult stem cells and another American who was treated successfully with his own stem cells—even though he had to go overseas.

Between appointments, I met one of my representatives and his entourage in the hallway. Thereupon, I told Senator Chuck Schumer of New York that I am alive due to adult stem cell research and I asked him to vote for ethical research because 400,000 people—now it’s 500,000—have been treated with adult stem cells. He said, “Doctors and scientists tell me that hundreds of thousands of people have been treated and helped with human embryonic stem cells.” I looked him in the eye and said, “Senator, that’s not true.” He said, “I’m for both. Are you for both?” I replied that I am for ethical research. He looked at me and my shirt, then mockingly said, “Ethics. It’s your religion.” I informed him that religion has no part in it and said, “It’s science.” He implied that religion made me irrational and persisted, “What do you believe?” Shortly thereafter, I told Senator Schumer that he didn’t represent me, he became upset and later he voted for the embryonic research bill.

Now I will tell you about my adult stem cell treatments.

In 2003, I felt ill for nine months and was treated for arthritis. When arthritis treatment didn’t renew my health, I went through blood tests, X-rays and a bone marrow biopsy which proved that I had multiple myeloma cancer. Myeloma is a blood cancer, it is also called bone marrow cancer and it can destroy the bones. On the X-rays, my bones looked like someone had used me for target practice. Suddenly, my father’s teasing from childhood had come true because I actually had holes in my head.

I went through five months of chemotherapy and was given the drug Zometa, which promoted bone growth so that my skull lesions filled in.

As an outpatient in the sixth month of treatment at Syracuse University Hospital in New York, my blood was circulated through a machine for eight hours. That pulled adult stem cells from my bloodstream. Then three one ounce bags of my blood cells were frozen and stored, until I was ready for a transplant. Only one bag was necessary for my transplant and the others remained frozen for possible future use.

In May 2003, I checked into the hospital. There I was given a massive dose of chemo for 15 minutes. Afterwards, I stayed in a sterile room for five days as the chemo left my body.

Subsequently, I was given my own adult stem cells through a catheter in my chest. The procedure only took 15 minutes. For the next three weeks, I stayed in the hospital where I was monitored constantly. As I like to say, I was “reborn” on May 20, 2003 because the adult stem cells had traveled to the core of my bones and begun growing me a new immune system and blood. About six weeks later, the catheter was removed and I took medicines for a few months.

Two months after my transplant, I felt normal. As a result, I began taking long walks, dancing and traveling with my husband. For one year, I had dietary restrictions and was told to avoid crowds, infectious people, small children, pets or anything that could make me ill.

Six months after the transplant, my hair, eyebrows and eyelashes grew back. After my first adult stem cell treatment, I enjoyed three blessed years of life with family and friends before the myeloma reared its ugly head again.

The second bout of multiple myeloma cancer was detected when I went for my monthly blood test while visiting my son in Texas. Consequently, in May 2006, I returned to my oncologist in New York, where I underwent a bone marrow biopsy, X-rays and more blood work.

However, it was time to change the treatment and I did not have to be hospitalized until the transplant. For over four months, I was given Thalomid and a steroid. Thalomid is a brand name for thalidomide, which eats multiple myeloma cancer cells.

During my second treatment, I traveled and enjoyed fewer restrictions than my first bout of the nasty cancer. With the second treatment, my cancer blood count went from 1505 to 56 and my bone marrow cancer count went from 61 percent to six percent on these drugs. In fact, the myeloma cancer did not affect my bones at all! I believe my rapid progress was due to the Zometa that strengthened my bones in combination with calcium and exercise.

Next, I was taken off all drugs for a month.

Then, on October 30, I was admitted to Syracuse University Hospital. That day, I received a massive dose of chemotherapy to kill off the remaining cancer cells.

On All Saints’ Day, merely two days after the massive dose of chemo, I was given the second bag of my adult stem cells through a catheter. Thankfully, the catheter was removed within two weeks of my transplant and all went much better. My hair did not fall out until after I returned home. And this time, my eyebrows and eyelashes did not fall out.

After a couple of months I felt normal, except for being bald. Again I had to avoid people with contagious diseases. Yet I had no dietary restrictions. I was on medications for three months to help my immune system and I was on antibiotics for six months. Because of the transplant, childhood immunizations were knocked out of my system, so I had to renew them.

There is much more to my story. Most importantly, no innocent human embryos had to die for me to live. I want everyone to know that God made us in a wondrous way insofar as we carry our own repair kits. So, let us proceed with adult stem cell treatments. After all, it is 21st-century regenerative medicine.

Carol Franz and her husband live in Owego, New York and they travel often. She speaks to students, lawmakers or anyone interested in the subject of stem cell treatments. Visit CarolFranz.com.