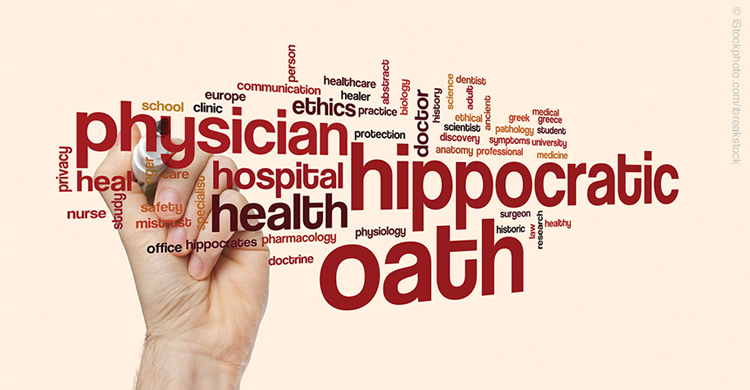 The vast majority of physicians entered medicine to help people, to practice their profession in an ethical way, with no intention in any way of betraying their moral consciences. These are fundamental tenets of the Hippocratic Oath. Recent publications in leading bioethics journals, primarily written by professional bioethicists with no medical degrees, seem intent on abolishing any semblance of independent conscientious thought on the part of physicians.1 It is becoming less of a consideration to question the morality of a specific legal medical act, but rather a question of whether the physician has the right to refuse the act. Some bioethicists ever more forcefully insist that physicians have no right to conscientiously object to performing any procedure as long as it is legal, including abortion and physician-assisted suicide.

The “Consensus Statement on Conscientious Objection in Healthcare,” published by the University of Oxford’s Practical Ethics,2 proposed a legislative framework to manage conscientious objection. The current legal protection of such conscientious objectors was deemed “indefensible,” with violators to be brought before “tribunals” and forced “to compensate society and the health system for their failure to fulfill their professional obligations. . . .” Compassionate young men and women not willing to accept doing unconscionable things should not apply to medical school, since students “should not be exempted from learning how to perform basic medical procedures they consider to be morally wrong.”

And what of the Hippocratic Oath, the same oath I took when graduating from the UCLA School of Medicine in 1984? It states: “I will give no deadly medicine to anyone if asked, nor suggest any such counsel; and in a like manner I will not give to a woman a pessary to produce abortion. With purity and holiness, I will pass my life and practice my Art.” In a single sentence, the oath precludes physician participation in suicide and abortion—precisely what modern bioethicists suggest requiring physicians to do under penalty of tribunal-induced sanctions!

And if the Hippocratic oath is not a good enough default, the uncomfortable fact remains that the 1945–1949 Nuremberg Trials meted out indictments and judgments not only for spectacular research crimes, but also for the nonexperimental crimes of euthanasia and abortion, categorizing them as a “crime against humanity” and listing Nazi abortion policy as an “activity marking a criminal organization.” Some doctors did refuse to participate. These conscientious objectors, praised at the trials, had been demonized and threatened by the Nazi’s as “reactionary Catholic physicians” and “traitors” with “Christian medical ideals.”3 It is a modern tyranny of moral relativism that would compel physicians to now do what was condemned at the Nuremberg Trials.

The dismissal of the history and altruistic motives of medicine are evident in the modern bioethics claim that “the scope of medical practice is ultimately determined by society,”5 as if physicians are mere pawns in the hands of policymakers and bioethicists bent on molding society in their image. What is at stake here is the ultimate right of physicians to practice ethical medicine according to their conscience, according to the Hippocratic Oath. At an even deeper level, the question touches upon what medicine is all about in the first place.

The sphere of some bioethicists is unabashedly and increasingly distancing itself from the ethical roots of medicine. Casual perusal of recent bioethics publications will reveal a plethora of articles defending eugenics, infanticide, not feeling guilty about immoral acts, and—I kid you not—annihilation of the human race (“What justifies a future with humans in it?”6). Other topics include defenses of eugenics,7 infanticide, 8 and why we should not feel bad if we have acted immorally.9 There is a dark segment of modern bioethics which revels in almost willful disregard for the future of humanity. For medicine to survive as a noble and ethical art primarily regulating itself, physicians need to be acutely aware of what is happening in the bioethical sphere. Rather than being an academic ivory-tower discussion, the agenda of “consensus statements,” such as that for conscientious objection, is to establish a platform for drafting medical and legal policies that have real consequences for real physicians— even if these practicing physicians have no say in these bioethical paradigms

Forced physician complicity in unethical medicine sends a disturbing message to the population at large. Do I really want to go to a doctor to treat me for cancer if that same doctor would have no trouble killing me if I asked him to? Can I really trust a medicine that has intentional killing woven in as part of its fabric? Physicians, more so than members of other professions, are generally still revered by society today as practicing a “higher calling.” Most understand that one of the roles of medicine is to be a light to the rest of the world, to transcend above an unethical society and culture. People still trust doctors to do the right thing in accord with their conscience.

It is a truncated paradigm indeed under which some modern bioethicists operate, mandating physicians do their bidding, mandating a medicine that violates its own Hippocratic Oath, unable to distinguish genuine medical care from a public service rendered under the dictates of just or tyrannical law. One wonders at what point bioethicists, who, unlike physicians, do not have to stress about caring for or saving their patients’ lives, should be brought before their universities’ boards of inquiry for irresponsibly demanding absurd and dangerous public policy.

4 Affirmation of the Principles of International Law recognized by the Charter of the Nuremberg Tribunal. Resolution 95(1) of the United Nations General Assembly, 11 Dec 1946.

9 Bioethics Research Library. “7 reasons not to feel bad about yourself when you have acted immorally.” [Blog post]. https://bioethics.georgetown. edu/2014/12/7-reasons-not-to-feel-bad-about-yourself-whenyou- have-acted-immorally

Dr. Fritz Baumgartner is a cardiovascular and thoracic surgeon working in California, and has published over a hundred articles on topics ranging from molecular biology to general, vascular, and cardiothoracic surgery, to medical bioethics. He loves being surrounded by beautiful females, namely, his lovely wife and three adorable daughters. He tries to follow his wife’s directive to use his Catholic faith as the “steering wheel” of his life, rather than the “spare tire.”