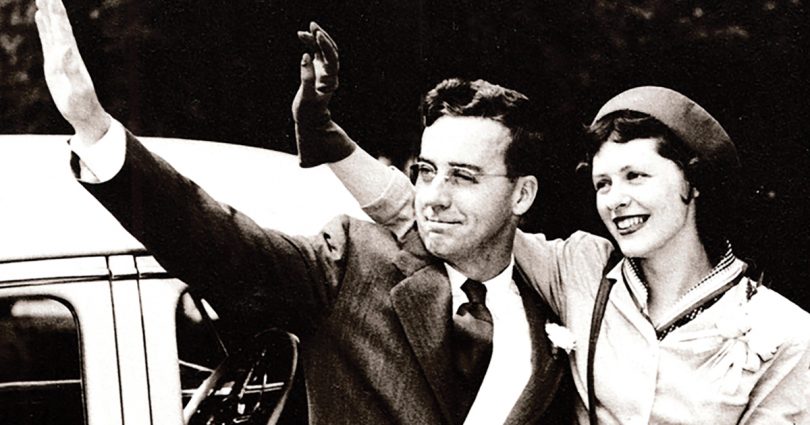 On a gray September day, my family gathered to lay our father to rest beside our mother. Standing in the rain beside my parents’ grave, I recalled my childhood, filled with happy times shared with three sisters and a brother. I reflected on the love my parents shared and their simple conviction that marriage was forever.

I thought about their vocation to marriage and how it shaped our lives. They faced many challenges over the years, but perhaps the greatest was my mother’s lifelong struggle with mental illness. Through this affliction, my parents—and in some ways, each of us children—were called to share, in a special way, in the cross of Christ.

My mother, a college graduate in an era when this was a rare accomplishment for a woman, was a lifelong learner. Always aware of new developments on the cutting edge of science, well read, politically active, creative and artistic, it seemed normal to me to have a mom with these qualities. She could also be a bit eccentric, showing up at school assemblies wearing clunky galoshes with a dress, or spending hours carefully decorating our old black telephone with colorful contact paper.

Perhaps demonstrating the fine line between brilliance and mental illness, my intelligent and unconventional mother also suffered from a chemical imbalance of the brain. This condition caused her to experience severe manic-depressive episodes throughout her life, and it ultimately impacted us all.

Mental illness, so little understood even today, was even more of a mystery in the 1940s, when my mother’s condition first surfaced. At a stressful time for a young woman in college, she experienced her first breakdown. The doctors told her that this condition, probably genetic, was not curable and she would likely experience recurring episodes.

In sickness and in health

When she later met my father and their thoughts turned to marriage, she told him about her condition and the prognosis. Deeply in love, he was undeterred, and on August 22, 1953, he vowed, without hesitation, to remain by her side “in sickness and in health, ‘til death do us part.”

The predictions held true, however, and three years later, just after the birth of their second child, my mother began to experience the roller coaster of mental illness again. She was hospitalized for nine months and subjected to the state-of-the-art treatments of the time, which included submersion in ice-water baths, insulin-shock therapy, and electroshock therapy.

During my mother’s long absence, my father frantically divided his time between working, visiting her in the hospital, and checking on the children, who were in my grandmother’s care. My newborn sister bonded with my grandmother, making her return home to my mother traumatic. Their relationship never fully recovered from the effects of that early separation.

The disease lay dormant for several years after this episode. I was born soon after my mother returned home, with two more sisters arriving to complete our family. I was blessed to grow up during these interim healthy years. My mother was unfailingly loving and supportive. My father faithfully provided for his family, and had a knack for making summer vacations and Christmas mornings quite magical.

But my mother’s illness resurfaced when I was a teenager. Improved medications and therapies enabled her to remain at home this time. But the depression drained her energy, and she could not keep up with disciplining two rebellious teenage daughters.

Our behavior may have been the stressor that tipped the scales for her, but as a teen, I was too self-absorbed to understand what she was going through. I now realize that the loss of her protective vigilance came at a critical time, allowing my sister and me the  “freedom “ to make some serious errors that would have a lasting effect on us both (see “From 40 years of sorrow to a future filled with hope,” Celebrate Life, Winter 2013).

As my mother aged, the disease progressed until even the times between breakdowns were marked by increasingly erratic behavior. She was now taking lithium, an effective medication, but would often become paranoid and secretly stop taking her meds, leading to a spiraling loss of connection to reality. Her manic episodes could be frightening to those around her, but she dreaded most the subsequent darkness of depression.

My mother’s mental illness also contributed to her inability to take care of other health problems, including diabetes. She suffered some slight strokes, falls, and other negative effects as the diabetes grew worse. It became difficult to tell which symptoms were due to her various ailments and which were side effects of her many medications. My father, also getting older, was beginning to feel the burden of being her sole caregiver, and his nerves were increasingly frayed.

Eventually, she was hospitalized again. This time the doctors recommended continual nursing care. This was a difficult decision, but the family agreed it was necessary. She found a very good facility about 50 miles from home. Relieved of the burden of being her caregiver, my father could once again enjoy his relationship with his wife. Twice every week, he drove up to visit, taking her for walks on a nearby beach and having dinner with her. She remained there for the last five years of her life until, at the age of 75, she died peacefully with her hand in his.

My mother once told me that she kept a crucifix in every room so she could see Christ on the cross at all times. I believe that at some point in her life, my mother offered God her fiat, accepting the cross of mental illness. In a mysterious way—through their vocation to marriage—my father also took up a share of that cross as her husband. Despite the frustration and difficulty that the illness brought, he never abandoned her. His beautiful and brilliant bride had captured his heart forever, and he stayed by her side until the end.

We were blessed to have a father who so faithfully cared for our mother. Such fidelity has become the exception rather than the rule today. A father’s role as protector and provider is increasingly devalued in a society that fails to recognize the complementary gifts men and women bring to a marriage.

But God still equips men and women with the grace to fulfill their unique roles within the family, providing us with the wonderful example of the Holy Family. Saint Joseph, who faithfully stood by his betrothed when he might well have questioned her sanity, demonstrates the strength and fidelity required of husbands and fathers. Mary provides the model for mothers by her unhesitating cooperation with the will of God.

Through their faithfulness, the miracle of redemption was made possible, since God made His whole plan of salvation contingent on Mary’s “yes,” and Joseph’s willingness to protect and support her and the baby Jesus. Strong men of faith are needed to protect and defend their families more than ever in a world where the weak and vulnerable are increasingly marginalized and under attack.

Growing threats and the need for support

The practical support of others in the community is also vital to those caring for the mentally ill. Our family was fortunate to have found a good facility when it was needed and because my mother’s age allowed her to enter traditional nursing care. Today, however, many inpatient facilities for the mentally ill are closing their doors without a corresponding increase in community-based support. Instead, the problem of mental illness is often dealt with by law enforcement when the behaviors become socially unacceptable.

At the same time, the push towards euthanasia, based on “quality of life” criteria, is growing stronger. The day is coming—and perhaps is already here—when we can no longer count on governmental or institutional support for the handicapped, the mentally ill, and the elderly.

As Catholics, we must unfailingly bear witness to the fact that each human being possesses inherent value as a child of God, regardless of age, illness, or mental capacity. Each person contributes irreplaceable gifts to the human community. Our response to each person constitutes our response to Christ in His humanity.

What, then, will that response be? The problems that accompany chronic illness may seem overwhelming, but something as simple as providing transportation to a doctor’s appointment, offering a day’s respite care, or lending a sympathetic ear to the caregiver of a mentally ill person can make all the difference.

It is important for those facing mental or physical illness to know they are not alone. Reach out to help those in need. And if you or your loved one is suffering in this way, remember to turn to Saint Joseph for strength, seek out the tender care of the Blessed Mother, and always trust in God to accomplish great things through the most difficult challenges you face. You never know what part of God’s plan might be dependent upon you.

Resources for coping with mental illness