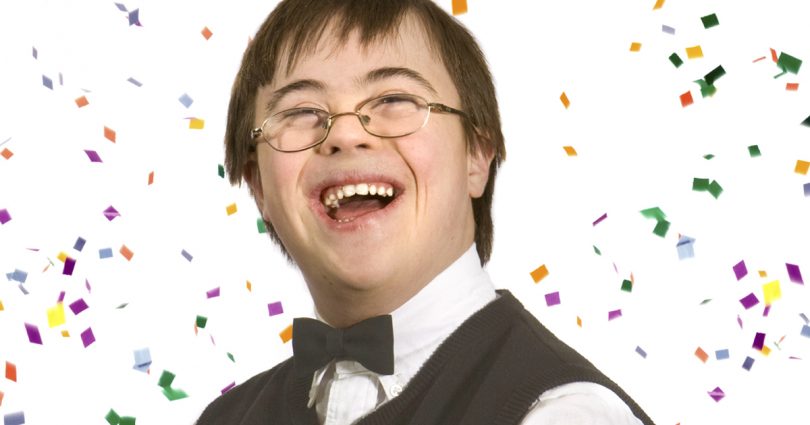 For 10 years, as a special education teacher, I taught students with multiple disabilities everything from academics to job skills. One such student was an exceptional young man born in the late 1960s and diagnosed with Down syndrome, a heart condition and a visual impairment. Down syndrome results from inheriting a third copy of the 21st chromosome, rather than just the usual pair. It can cause reduced IQ, vision loss, hearing loss, speech impairments, heart defects, floppy muscle tone and finemotor difficulties. But this unforgettable child taught me a great deal about vision, intelligence, perseverance and the sheer joy of living.
I met Morgan Allan when he was in middle-school. He looked like a Raggedy Andy doll with shiny brown hair. His little face and head were just that round, his nose was a button, his smile was a perfect semicircle, and his eyes looked small and shiny beneath his bottle-thick glasses.

Morgan came to my resource room three times weekly. His face lit up upon entering the room, and his brown almond-shaped eyes grew round and shone amber when he laughed at a pleasantry. Once he began his work, his face sobered and he pursed his lips. If I made an off topic remark, he uncurled his mouth again and giggled, “That’s silly.”

Morgan’s visual impairment affected his schoolwork in many ways. He hunched like a half-drawn turtle to labor over any close-vision task. It took him three years to learn how to discriminate lowercase b from d. As for practical math, he couldn’t see play coins well, let alone pictures of coins. He learned to sort real coins by scratching the edges for touch cues. Every task was difficult for Morgan, yet he found joy in the moment. I remember his delight when I once set out purple and yellow plums as thanks for the students’ good work. He feasted on them, with bright juice running down both fists.

Morgan did whatever he put his hand to with all his might. In his early teens, he still had trouble discriminating between left and right. Three times weekly, he assembled nuts and bolts for his prevocational skills exercises. When he asked which way he should turn the metal parts, I shared an old rhyme my husband had learned: “Righty tighty, lefty loosey.” He assembled those pieces three times weekly for over four years, softly chanting, “Righty tighty, lefty loosey” until he mastered those movements.

From age 13 to 18, Morgan worked daily on tying his shoes. When he still needed help after five years, my supervisor convinced me to drop this as a goal. “That’s what Velcro is for,” she remarked. A year later, I noticed him tying his shoes. His mother had practiced with him until he learned to do it himself. They both personified perseverance.

The world through Morgan’s eyes

Abstractions didn’t compute for Morgan, and memorization was like building a reef of tiny information-bit corals in his brain. Once that “memory reef ” solidified, however, watch out! Morgan got prickly if new information bumped against his carefully built concepts about the world, and his world was very black-and-white.

For a nearsighted young man, Morgan perceived some things quite clearly, and he always got straight to the point. A few months after my wedding, 13-year-old Morgan remarked, “So, you got married, right?” “Yes.” “So,” he continued, “when you gonna get pregnant?” “Not for a little while.” I seized the teachable moment. “Morgan, you and I know each other real well, so I’m not bothered by your question. But would you ask another teacher a personal question like that?” Morgan’s Cheshire-cat grin spread to his ears. “Nah,” he asserted, “I’m too smart for that!” I never heard him ask a highly personal question again.

Six months later, he learned to read a list of large-print safety signs, including one that said, “Private.” I explained what the word meant, wondering if it was too abstract. I needn’t have worried. At age 15, inexplicably, Morgan began arguing with both adults and fellow pupils. I asked him what he felt when he got so upset. “Feelings are private!” Morgan shot back. “But if you can’t control yourself, then you make it our business,” I insisted. “Ms. Stallings, repeat after me, ‘Feelings are private!’” “Fine. Keep them private by not yelling at anybody.” Done! Morgan controlled his temper from then on. Morgan’s world moved slowly and, from a distance, was blurred. Step by step, he learned to navigate city streets and find bus stops, preparing for independent travel as an adult. And just as he gradually learned how to avoid obstacles and sidewalk potholes, his awareness of others’ perspectives slowly gained depth. I realized he had discovered the wonderful world of color when he began noticing my colorful clothing. He reported, “I tell Mom all about your skirts and your dresses and …”

Morgan welcomed new ideas and achieved eureka moments with gusto. When I showed him a new way to grip the vacuum cleaner’s handle, his brow furrowed and when he “got it,” his Cheshire-cat grin sprang forth like daybreak. He declared, “That’s so crazy, it just might work!” Then he tried it—until it did work.

When Morgan was 16, his parents requested that we teach him more home-maintenance chores. Sweeping or mopping a floor isn’t easy if you have low vision. It may be hard to see missed or wet spots. He learned to sweep, vacuum and mop in a grid, each stroke overlapping the other, first horizontally across the room and then vertically. Morgan mopped the floor so intently and vigorously that when I asked other teachers to let him practice on their floors, they jumped at the chance.

The story that best epitomizes Morgan happened at the nursing home where he did his work training The residents there loved Morgan, then age 20. One day, while I observed him vacuuming the carpet, I saw that he had inadvertently tugged the long vacuum cleaner cord into the path of a resident slowly navigating the carpet with her walker. I yelled, “MORGAN! Watch out! ”

The feisty senior stumped toward me as fast as she could, indignantly declaring, “I can watch out for HIM!” You would’ve thought I’d scolded her favorite grandchild! I then had my own eureka moment. It was time for the teacher to back off!

Morgan invited me to his 21st birthday party, which was quite an honor. By reaching adulthood and in good health he had beaten the odds once prevailing for persons with both Down syndrome and a heart condition. The event was held at an Italian restaurant, since Italian food was his favorite. As he and his family sat around a large table in the main dining room, he blessed those around him with his Cheshire-cat grin and radiated joy, as if his face were an independent light source.

Other restaurant patrons felt Morgan’s joy. A man respectfully approached and told the guest of honor, “My friend and I would like to celebrate your birthday, too. We wanted to ask your parents if we could give you something.” With a five-dollar bill folded in his hand, he looked toward Morgan’s parents for permission. A triumphant Morgan was soon $5.00 richer. It topped off a great evening.

Upon graduating from school at age 21, Morgan began working fulltime at the nursing home. He made sure he could be home for dinner with his family each night. Also at the table was a sibling who was training for a health-care profession, a career choice Morgan had inspired long before.

Recalling Morgan’s birthday party, I understood why the total stranger offered him a small gift. Morgan himself was a gift.

J. J. Stallings has a master’s degree in special education and currently teaches special-needs students at a school district in the Midwest. Her best days are when a student lets her know she’s funny by falling over laughing at what she says in class.

J. J. Stallings has a master’s degree in special education and currently teaches special-needs students at a school district in the Midwest. Her best days are when a student lets her know she’s funny by falling over laughing at what she says in class.