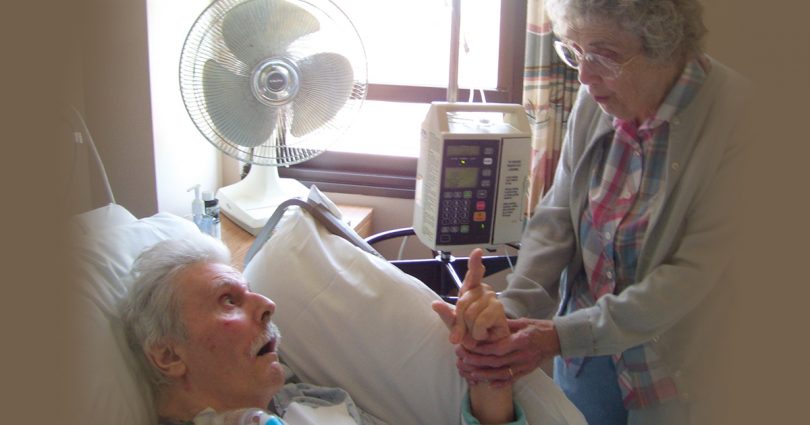 When Sarah Palin predicted “death panels” were coming under Obamacare, she was sharply criticized as alarmist and reactionary. And, in fact, she was wrong on one point: They’re already here.

In health care facilities nationwide, so-called ethics committees have become a reality over the last few decades. They are now part of many facilities’ risk-management process, and they make life-ordeath decisions every day, motivated largely by the desire to reduce expenses and liability exposure.

This is one of the reasons that, following my sister Terri Schiavo’s death, our family established Terri’s Network (see Celebrate Life, July-August). We wanted to help other families avoid the tragedy our family experienced in our unsuccessful battle to save her life.

We have been involved in hundreds of cases, many of which concerned decisions made by these ethics committees. Nothing underscores how they threaten innocent lives more than the case of Gary and Sara Harvey of Horseheads, New York.

In January 2006, Gary fell down his basement steps and was left with profound cognitive disabilities. He had no advance directive and had only his wife, Sara, to protect him. Gary was admitted to the Chemung County Nursing Facility in May 2006. Sara soon found herself in conflict with the facility over his care, which she describes as seriously negligent.

In February 2007, Chemung County stripped Sara of her rights as guardian of her husband, and Gary has remained a ward of the County ever since. In May 2009, he was transferred to St. Joseph’s Hospital in Elmira, where he remains. About two weeks later, the hospital’s ethics committee recommended the removal of Gary’s nutrition and hydration tube, and the issuance of a do-not-resuscitate order. This was done without the direction of Gary’s family and would have ensured his death.

In June 2009, Chemung County asked the state supreme court to authorize the removal of Gary’s feeding tube, but fortunately, Justice Judith O’Shea denied the request. Inexplicably, however, the DNR is still in effect and he remains under the control of Chemung County, despite the fact that it tried to end his life.

What is even worse is that these events have occurred at a Catholic health care facility. And Bishop Matthew Clark, of the Rochester diocese, has basically turned his back on the situation. Sara told me, “No bishop would help or the Catholic Church.” Sadly, this occurs more often than one would think.

According to WorldNetDaily (May 17), the National Association to Stop Guardian Abuse (StopGuardianAbuse.org) wrote to Bishop Clark in January, asking him to find out why “St. Joseph’s Hospital’s Ethics Committee chose to participate in what would have been Gary Harvey’s execution rather than prevent it.” His response, sent about a month later, according to NASGA: “I am convinced that St. Joseph Hospital complies with the Ethical and Religious Directives for Catholic Health Care Services, that the hospital is complying with the order of the court, and that there has been no attempt to shorten Mr. Harvey’s life.”

Pernicious scenarios similar to the Harveys’ ordeal take place often, but usually so silently that most people are simply unaware of the dangers.

These ethics committees can unilaterally make decisions contrary to your desires and get clean away with it—legally and quietly. Tragically, most people never think to question or push back when such decisions are made.

Attorney and author Wesley J. Smith is an expert on medical ethics, and has written a number of books on subjects such as health care rationing, assisted suicide and euthanasia. In a 2006 National Review column, “Death by Ethics Committee,” he noted,

Andrea Clarke [a Texas heart patient on life support] may become an early victim of one of the biggest agendas in bioethics: futile-care theory, a.k.a., medical futility. The idea behind futile-care theory goes something like this: In order to honor personal autonomy, if a patient refuses life-sustaining treatment, that wish is sacrosanct. But if a patient signed an advance medical directive instructing care to continue—indeed, even if the patient can communicate that he or she wants life-sustaining treatment—it can be withheld anyway if the doctors and/or the ethics committee believes that the quality of the patient’s life renders it not worth living….

But Clarke’s case involves value judgments rather than medical determinations. In such “qualitative futility” cases, treatment is stopped in spite of a patient’s or family’s objections the intervention is necessary not because the treatment doesn’t work, but because it does. In essence then, it is the patient’s life that is deemed futile and, hence, not worthy of being preserved.

Top all of this off with an added layer of bureaucracy (i.e., Obamacare, the federal government’s new oversight and cost-cutting plan), and you surely have a recipe for absolute disaster.

The time is now for every American 18 or older to think carefully about the types of care they expect and should demand in the event of a medical catastrophe (see sidebar). You cannot be too young or too healthy to defend your life. Thanks to contemporary medical “ethics,” the odds are clearly against you.

In cases such as Gary Harvey’s and so many others we have seen, treatment is stopped at the pleasure of a facility and without regard for the patient’s wishes, the family’s direction or even what is medically ethical or proper.

So, maybe death panels aren’t such a wild notion, after all. And if you’re not frightened now, you should be. But don’t take my word for it. Just ask Sara Harvey.

Bobby Schindler writes from Tampa,Florida. He cofounded the Terri SchiavoLife & Hope Network, and is a full-time pro-life and disability rights advocate. Tol earn more, visit TerrisFight.org or call 727-490-7603. To learn more about Sara Harvey’s battle to save her husband,visit HelpBringGaryHome.co

Bobby Schindler writes from Tampa,Florida. He cofounded the Terri SchiavoLife & Hope Network, and is a full-time pro-life and disability rights advocate. Tol earn more, visit TerrisFight.org or call 727-490-7603. To learn more about Sara Harvey’s battle to save her husband,visit HelpBringGaryHome.com