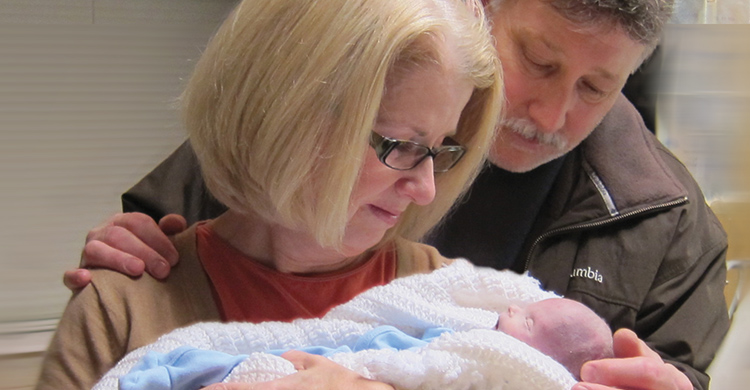 In May 2013, after nearly four years of marriage, Melissa and Scott were overjoyed to share the news that Melissa was eight weeks pregnant with their first child. Not expecting to hear this particular news, both sets of grandparents had the same reaction: “Say what? You guys are expecting?! That’s awesome.”

Melissa and Scott decided not to share their excitement quite yet with other family members and friends because they wanted to get through the first trimester of pregnancy and make sure everything was okay first. So the grandparents were sworn to secrecy.

Finally, the beginning of the second trimester came and the happy news was revealed to all family and friends. Everyone was elated and the anticipation of welcoming the little bundle of joy began.

In September 2013, at their first sonogram appointment, where most parents learn the baby’s gender, the sonogram technician noticed low amniotic fluid. She referred Melissa and Scott to a specialist the following day. This is the e-mail Melissa wrote to her family and friends:

As many of you know yesterday was our 20-week prenatal check-up. During our sonogram appointment the tech noticed that the amniotic fluid was low and she sent us to a specialist today for more details. For those of you that we called yesterday to tell you the gender remained a mystery we did not want to tell you about the low fluid until we had a better understanding of what that meant.

Today’s appointment revealed that our baby has a kidney birth defect that is fatal. Both kidneys have multiple cysts and the bladder has not formed which is why the amniotic fluid is low. Even if the baby makes it full term, he/she will not live long after the delivery.

We are told that termination is an option, but there is no way I could live with myself if I did that. We have decided that we will continue on with the pregnancy until the baby takes his/her last breath whether that be in my womb or in our arms.

I know emailing you this type of information may seem impersonal, but it is very hard for Scott and I to talk about this while having to make individual phone calls and explain the situation.

Tears flowed . . . hearts ached . . .Melissa and Scott woke up crying each morning for several days. They couldn’t talk on the phone or go into work; it was just too painful, shocking, raw, and difficult to think about, much less talk about. Their family and friends were greatly saddened to hear this news, but felt deep down that Melissa and Scott were making the right decision—a brave and courageous journey to welcome their little baby, sick or healthy, into this world. The young couple desired to meet their little one face-to-face rather than end his or her young life prematurely and start over, as if the baby’s life were meaningless. “Let nature take its course,” both of Melissa’s grandmothers would have said about the situation.

After a week, the shock wore off. Melissa was able to share her feelings and talk about what she and Scott had learned from the specialist. Both of them went back to work. Although their co-workers knew what was happening, Melissa and Scott decided to act as normal as possible with customers and others around them and not to share any specifics about the outcome.

Melissa discovered Alexandra’s House for support and comfort. The director shared insight and information regarding parents in similar situations and what to expect for their ‘special babies.’ Alexandra’s House also provided many free services for the expectant parents, including several free or low-cost funeral options for them to consider.

Melissa wanted to stay “as happy as possible” throughout her pregnancy and delighted in the little things, like shopping for maternity clothes and thinking of the perfect name for the baby. The doctor said there was no reason she couldn’t carry the baby to full term, so that is what she and Scott planned to do. Melissa really wanted to deliver ‘naturally’ and not by C-section. They planned to donate the baby’s heart valves and corneas to help other needy newborns.

The second sonogram, at 30 weeks, confirmed what the first sonogram had detected—multiple cysts in the kidneys and no bladder. The baby was also in breech position, which meant that Melissa might need to deliver via C-section.

In the following weeks, along with the normal cheerfulness that accompanies most pregnancies, there were moments of deep sadness and pangs of worry when thoughts of the fast-approaching delivery hit. The reality of the event was getting closer; Melissa and Scott would have to face the pain of labor and an unknown delivery, but also, most importantly, meet their little one. They couldn’t wait to see the baby and cuddle him or her, but on the other hand, they knew it would be a mixed blessing of joy and sorrow. Would he or she be sick? Would the baby be in pain? What if the baby lived for a few days—how would they handle it? There were many questions and concerns weighing on their minds.

On December 8, 2013—seven weeks early—Melissa gave birth naturally to a beautiful baby boy, Grayson Sterling Corder. Grayson lived only a few minutes, but he was most loved. His parents doted on him and gently cuddled his little body. The hospital staff was sensitive and compassionate, and allowed the parents to spend as much time as possible swaddling Grayson before Melissa left the hospital. They even were able to bathe him shortly after birth, which provided for a delightful photo opportunity. Unfortunately, because Grayson was considered too tiny, they weren’t able to donate his organs as planned.

When asked what she would do differently if she could re-do any part of the journey, Melissa said, “I wish I had put some lotion on Grayson after we bathed him so that I would think of him every time I smelled that lotion.”

Melissa’s mom noted, “My friends would make comments like: ‘What wonderful parents they are’ or ‘I marvel at them for their sacrifice.’ Just think—in this day and age of waste, self-centeredness, and instant gratification, it is so refreshing to see someone display patience, love, and doing God’s Will rather than choosing to do what is most convenient for them.”

Alexandra’s House (AlexandrasHouse.com) is a perinatal hospice program located in Kansas City, MO. They serve families and their babies who are expected to die near or shortly after birth due to various fatal anomalies. Alexandra’s House assists with birth planning, doctor visits, testing, labor and delivery, memorial services, and bereavement care. They offer comfort and meaning to suffering families.

Mary Ann Warden recently retired from the Internal Revenue Service after 35 years of public service. She served as a Public Affairs Specialist, writing and publishing business articles for IRS employees for the last seven years of her career. She lives in Olathe, Kansas and loves spending time with her four grandchildren, including Autumn, Melissa’s one-year-old toddler. Mary Ann has a deep love for pro-life issues and considers her journey with baby Grayson, as difficult as it was, to be a special gift from God.