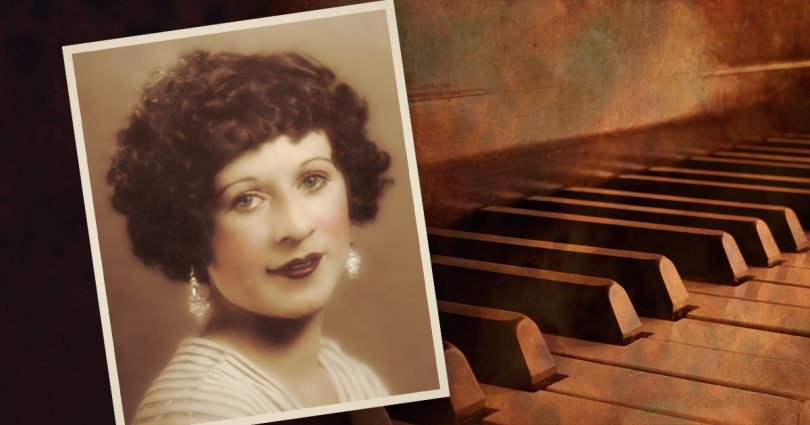 The year 1928 was a fateful one for me and the United States as a whole. My mother—a beautiful and gifted piano player—was then 20 years old and lived with her parents in San Diego. Her youth and musical talents led her to play for dances, a popular form of entertainment in the days before the advent of television and computers. Her quick smile and musical skills were noticed by the clarinet-playing bandleader, who took her under his wing as his star soloist. “She could sight-read music faster than anyone I ever knew,” said her violinist cousin.

Of course, in due time, the inevitable happened: The bandleader and my mother fell deeply in love. Together they moved into a very small apartment, and their romance lasted for about a year. During that time, I was conceived. Further complicating my mother’s situation was the fact that my father hadn’t divulged one important piece of information: He already had a wife and two children, who were living in another state.

Although she performed with the band as long as she could, my mother’s condition progressed until she could no longer do so. But she still needed to work. In the year before the stock market crashed and the Great Depression started, jobs for young pregnant women were nonexistent. And in those days, the stigma of being an unwed mother was crushing. Women who gave birth outside of wedlock were socially ostracized, but some had no alternative. Typically, pregnant young women left home or school, and went off to “boarding school”—a cover-up for giving birth to their babies or, tragically, having them aborted.

Abortion? That was an illegal and nasty business. Stories abound about the primitive, back-alley procedures that were used to solve “the problem”—and were often deadly for both mother and baby. Young women without family help or any means of support often availed themselves of these “services.” And many who survived those abortions were never able to bear children again.

To add to my mother’s terrible predicament, the bandleader’s wife suddenly appeared. She pressed charges against my father and the police arrived to take him away, never to be seen or heard from again. Where to? No one seemed to know.

The small apartment my mother lived in was only a few short blocks from her parents, aunts, uncles, and cousins. All were staunch Irish Catholics and strongly supported their local parish. My mother’s decision not to abort me was probably based on her strong Catholic upbringing. I was born in that small apartment, and I assume the doctor made a house call.

While my mother and I were reluctantly accepted by her family, she at least had the comfort of their protection. Years later, her aunt told me, “That poor kid must have worn out a couple of pairs of shoes going from store to store and shops, looking for a job. No one would hire her.”

A real man to the rescue

Harry, my stepfather had briefly dated my mother when she was 17. He met her at a dance while serving aboard Navy destroyers in San Diego. He wanted to marry her then, but she was too young. He had later shipped out to the Far East, serving with the Navy’s Asiatic Fleet for two years. He was a machinist’s mate, working in ships’ engine rooms and on repair ships. With only an eighth-grade education (which was far beyond the average at the time), he worked hard to advance in his profession. Promotions in the naval ranks were slow and rare; yet he had advanced to nearly the highest enlisted rank.

When Harry’s ship returned to San Diego, my mother went to meet him. She stood on the dock, holding her newborn fatherless baby in her arms. They had been corresponding during his absence, but I never knew if he had been told of my presence. There’s no way of knowing the thoughts running through his mind as he stood on deck while the mooring lines were made secure. He must have carried his love for her in his heart during his long absence.

Despite the fact that she had borne another man’s child, they married almost immediately. Could it have been that my stepfather wanted a wife and family, ready-made or not? Nearly an orphan himself, he had been raised by a blind aunt on a small, impoverished farm in Illinois. Even as a boy, to support the household, he had worked hard in the fields, tending and milking cows, and he shoveled coal on railroads.

Harry was never, in my mind, a stepfather. I called him Daddy. I even looked like him. It wasn’t until I was about seven years old that I innocently and playfully asked him, “Are you my daddy?” He had been playing with me in our living room and carrying me across to the kitchen for dinner. When he honestly replied, “No,” I was stunned. I refused to believe that, and I shrugged off his answer as a conversation that hadn’t taken place. He was my dad, the strong man that I looked up to and obeyed.

A couple of years later, my mom and Harry had a son. Dad, at this time, had attained the rank of warrant officer and was serving on battleships. He regarded both of us equally as his boys. I even assumed his last name, although I was never legally adopted. I was his much-loved son until the day he died. Dr. Laura Schlessinger put it somewhat crudely but quite correctly when she told one of her radio talk show listeners, “It doesn’t matter who the sperm donor was; the guy that fed you, clothed you, and put a roof over your head is your father.”

I think it must be very difficult for families to function without a father in the home. He provides the means of survival, and protection from the many pitfalls and dangers life presents. On the other hand, a mother provides the type of care, love, and comfort a father can’t. She and my dad fulfilled those roles for each other, and for my brother and me.

What I would have missed

Had my mother elected to have me aborted, I wouldn’t have had the joy of receiving her love and care, nor experiencing the happy family life that she and my dad created. And thanks in part to those strong family bonds, my brother and I were both blessed with families of our own. I had a long and successful military career and earned a master’s degree from a state university. I too shared my mother’s lifetime pursuit of music, playing many of her favorite songs on my piano to entertain friends. I was greatly encouraged by a dear friend who had grown up in my mother’s era. Not only did she give me free piano lessons for 30 years, but she also gave me the gift of her magnificent grand piano—her pride and joy.

My loving wife and I raised four children, who in turn, gave us seven grandchildren. All four children became accomplished musicians. Two even led bands of their own. My wife and I have enjoyed being with each other for nearly 60 years. None of this would have happened had my mother made the wrong choice while in the depths of despair as an abandoned young woman. And for that I am truly thankful!

Arthur R. Lee joined the U.S. Navy at age 17and retired as a commander after serving 30 years. He served on aircraft carriers in the Pacific, and is a veteran of World War II as well as the Korean and Vietnam wars. He has a BA in business management and an MA in public administration, and taught at Embry-Riddle Aeronautical University’s satellite campus in the Monterey area and Cabrillo College in Aptos (both in California). He enjoys sailing and playing the piano for his friends.