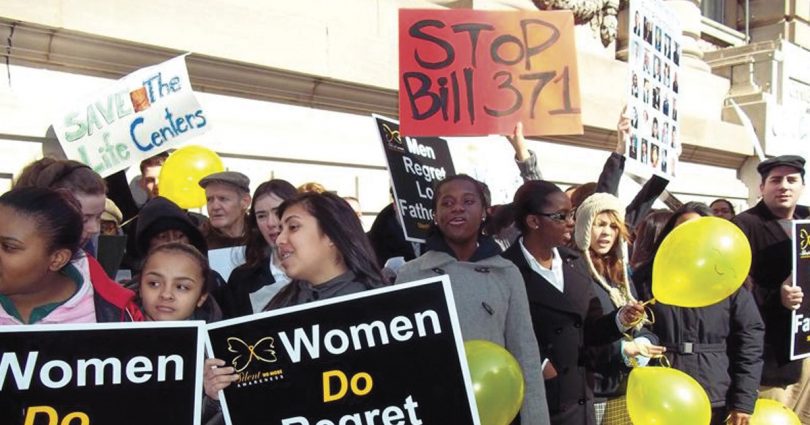 Like the 2009 “clinic access law” (see “The assault on lifesavers in the nation’s abortion capital” in our July-Aug. 2009 issue), the 2011 law attempts to limit the centers’ effectiveness in a city already plagued by about 87,000 abortions annually.

The 2009 law aimed to discourage pro-life sidewalk counseling outside of abortion mills, but it “had no effect on our work,” said Chris Slattery, founder and director of Expectant Mother Care-EMC FrontLine Pregnancy Centers (EMC). EMC is New York City’s oldest and largest network of pro-life pregnancy centers and an American Life League Associate group.

However, the 2011 law could have far more impact. It will require pregnancy centers to disclose, in English and Spanish—in their advertising, literature and client interactions—not only the services they provide but also the “services” they don’t provide, which will increase costs.

All advertising will have to indicate that the centers don’t provide abortions, abortion referrals, the morning-after pill or referrals for such, and that there is no on-site medical supervision in centers supervised remotely by a physician. Thus, fewer expectant mothers are likely to learn of available abortion alternatives.

Fines for violating the new law range from $1,000 for the first day to as much as $2,500 for each subsequent day. “After just three violations, we’d be subject to a hearing and a five-day closure,” Chris added.

“Quinn and the city council members charged that EMC’s arrangements—our partnerships with doctors for ultrasounds and prenatal care—that are all legally arranged, were inherently deceptive,” Chris reported. “But … from the time the bill was proposed until it passed, not one city official, not one agency representative—not one New York City Council member—ever accepted an offer to come visit any of our 12 centers.”

“City council members say we delay prenatal care, but we provide prenatal care within a week,” he continued. “We give the care even without [the women having] insurance [yet].”

On March 1, Archbishop Dolan and Bishop DiMarzio issued a joint statement urging the city council to reject Bill 371-A, and on the next day, over 225 pro-lifers participated in an interfaith march, rally and press conference that EMC helped to organize. But the bill was passed by a 39-9 vote, with one abstention.

EMC is represented by the American Center for Law and Justice and the American Catholic Lawyers Association. Chris and ACLJ attorney Tiffany Barrans spoke at the bill signing, criticizing Bill 371-A as unconstitutional and unfair. Nonetheless, despite the city’s staggering abortion statistics and the abovementioned public testimony, Bloomberg signed it. According to the March 16 Wall Street Journal, at the signing, Bloomberg said, “I’ve always been pro-choice” and told opponents, “If it’s constitutional or not, I just don’t know.”

On January 28, a similar ordinance for Baltimore, Maryland, was struck down in federal court as a violation of the First Amendment.

On March 18, Alliance Defense Fund attorneys, representing two other New York City pregnancy centers and a maternity home, filed suit against the City of New York, and on March 24, the ACLJ filed a lawsuit on behalf of EMC and the Life Center of New York.

“Both the Baltimore and Montgomery County cases really support our position: that this is ‘compelled speech’ and that it’s unconstitutional,” CeCe Heil, an ACLJ senior counsel, said. The ACLJ is challenging Bill 371-A as a violation of the First and Fourteenth Amendments. “You can’t take away rights without the due process of law,” she explained.

Meanwhile, EMC will be busy. “I have four months to … adapt to stay in business, and we’ll adapt, but I don’t think it’ll be easy,” Chris disclosed.

EMC isn’t financed by either of New York City’s two Catholic dioceses, and there are no Catholic hospitals left in the city. “They were all shut down, closed, collapsed. I’m the last pro-life, non-abortion health care [provider],” Chris pointed out. “We’re as pro-life as you can get—against contraception and abortion … and we’re attacked for fighting for life on the streets and in the centers. We’ve been operating for the past 26 years, and currently, there are no other free ultrasounds available in New York City. If we go down, alternatives to abortion . . . will all but disappear.

“We turn around about one-half of all the women we work with,” he continued. “We’ve helped save about 40,000 babies in the last 26 years—out of about 110,000 women counseled. And we’re continuing our work out of our 12 present locations—in four of the five New York City boroughs.” Chris is undaunted by the abortion cartel’s latest attack:  “We have to show the pro-life movement we can withstand these attacks, get around them, survive—and thrive.” Please keep EMC in your prayers.

How to help EMC

Get updates on EMC’s lawsuit, sign a petition and learn about other ways you can help EMC with its legal battle at SavetheLifeCenters.com, or by calling 212-213-4690. If licensed in New York, you can apply to help provide the full-time nurse supervision required by EMC to be exempt from the new law.

Catherine J. Barrier freelances from Somerset, New Jersey, is the founder and former director of the Central Jersey Christian Writers’ Fellowship, and teaches English as a second language for Rutgers University.