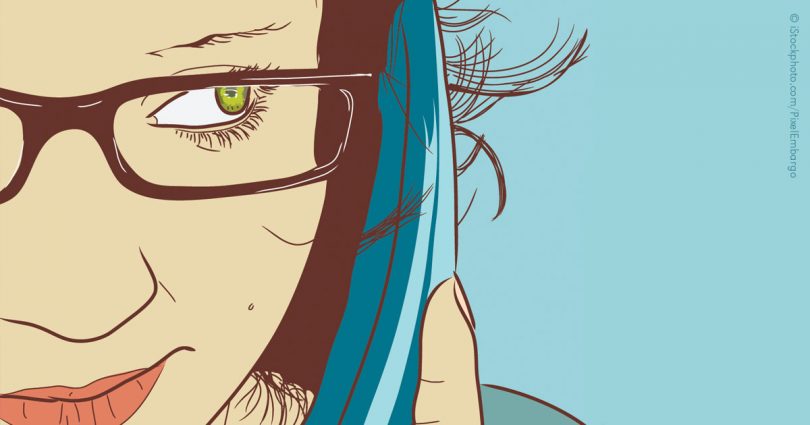 I don’t remember her name; I probably never will. But she was the woman responsible for saving my son’s life. This Mother’s Day, I’d like to celebrate the woman who gave me the courage to be a mother.

In 1978, I was a scared 16-year-old with a terrible secret. Raised in a good Catholic home, I knew the difference between right and wrong. My parents were loving, involved, and fairly strict. But I was young and pressured by what I deemed my need to keep up with my friends. Suddenly, doing what was right didn’t seem to be the answer.

I found out I was pregnant at a Planned Parenthood facility. Stunned, I stumbled over my words, saying, “I love children,” when I meant to say, “This can’t be happening to me! It was only one time!” To her credit, the doctor didn’t immediately recommend an abortion; she seemed to understand that I was conflicted. She sent me on my way without comment, and I left before anyone could talk to me. I just wanted to run!

At home I was silent. I couldn’t tell my mother! I was so ashamed, embarrassed, and scared. Most of all, I just wanted “it” to go away. I took a long walk and wandered into a Hallmark store, where I bought a plaque that said, “Between me and God, I can handle anything.” It became my motto during the next few months, as I wrestled with my conscience.

Rescued by the voice of reason

Finally, the day came when I could no longer postpone a decision. It was now or never, as the baby would soon be four months along. I wonder now if I waited on purpose, and to this day, it’s my nature to procrastinate—which was very fortunate! My friend, in all her teenage wisdom, handed me a phone book and said, “Get it over with. You’ll be glad you did.”

I opened the book to “abortion,” and there on the same page was the number for Heartbeat—a pro-life pregnancy center. Though I desperately wanted “the problem” to go away, I had two thoughts: How could I live with myself for the rest of my life while carrying this dark secret, and how was it fair that I was about to punish this baby for something I did? Instead of calling the abortion facility, I called Heartbeat. I nearly hung up when someone answered, but my fear paralyzed me.

The counselor immediately sensed the urgency of my situation and begged me to tell my mother. She promised that my mother would still love me no matter what I decided, but told me I couldn’t possibly make this decision without my mother’s input. Tearfully, I promised to do just that, and after more encouragement to do the right thing and not make a decision until I spoke with my mother, we ended the call and I walked home.

Mom wasn’t surprised by the news. She had noticed my somber moods and heard me crying when I thought I was alone. She knew, and the first thing she said to me was “Thank God you didn’t abort my first grandchild!” From that moment on, she was my strongest supporter, even with the pain and embarrassment I had caused my family. Mom was also my labor coach, because my boyfriend promptly dropped me after he learned I was pregnant, and when my son was born, she cared for him, because I had complications and had to be hospitalized.

Many years later, I read an article in my hometown newspaper, the Toledo Blade, about the death of Mrs. Lore Maier, who, along with Dr. John Hillabrand, founded Heartbeat of Toledo, Ohio, in 1971. By 1993, they had also established Heartbeat International, which is now a worldwide network of 1,400 pregnancy centers. Mrs. Maier, a refugee from Nazi Germany, volunteered full-time as Heartbeat International’s first executive director. As a court recorder at the Nuremberg Trials,1 she had observed how the Holocaust began: by killing those who were “imperfect.” In 1979, she commented, “If we are not pro-life, we are against our own survival.” 2

I still remember my conversation with the nameless volunteer counselor at Heartbeat. She never knew that I had my baby, that my family helped raise him, and that he grew up to be a lifesaver of a different kind. I wish I had met Mrs. Maier or at least let her know that, because of her hard work, my son is alive and well, and now has a child of his own.

Her training helped a wise and caring counselor recognize the desperation of a pregnant teenager, and that counselor, in turn, gave me the courage to give birth to my son. Brandon grew up to be a hero: a decorated United States Marine, and a police officer who dedicates his life to the safety and protection of the people he serves. Letting him live meant that others would live and that he would touch countless other lives.

If I said that raising Brandon was easy, I’d be lying. Raising him on my own and leaving my childhood behind was a journey of both pain and joy. But because Heartbeat was there for me when I was a young woman in dire straits, I made the right decision instead of having to live through a lifetime of regret.

I challenge other pro-life proponents to be the voice of reason and dare to care. You absolutely don’t know how many lives you might be sparing! I can’t even imagine what my life would be like, had I made the decision to abort. No matter the pain, no matter the sacrifice, giving my son life was the right thing to do. And I believe, with all my heart, that I’m a better person for it.

And as for that nameless volunteer, though we might never meet in this world, I’ve never forgotten the gift she gave me at my time of greatest need. Thank you, Heartbeat and the counselor who answered my call! You gave me the courage to earn the title I cherish most: Mother.

Editor’s note: This article was adapted from a speech the author gave at an annual fundraiser for the Heartbeat of Toledo pregnancy support center (an affiliate of Heartbeat International) in 2007.

1Shortly after World War II ended, 185 German leaders were indicted for war crimes and crimes against humanity committed under the Nazi regime. They were then tried before the International Military Tribunal and the Nuremberg Military Tribunals in Nuremberg, Germany, from 1945 to 1949. Guilty verdicts were handed down to 142 of the defendants. —Editor

Diana Mylek is a wife, mother, writer, and speaker, and an author of six novels. She has three children, all grown, two born grandchildren, and a preborn grandchild whose birth is eagerly awaited. She has also been a foster mother and has volunteered at various pregnancy centers. You can visit Diana online at DianaMylek.com and learn more about Heartbeat International at HeartbeatInternational.org.