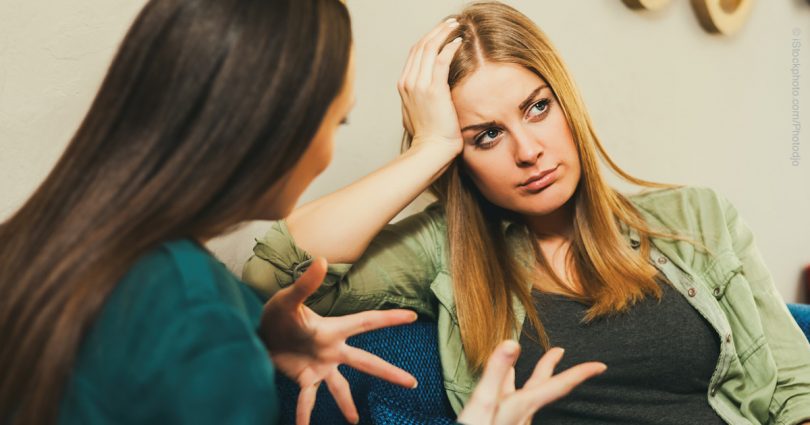 I sat in the nicely furnished counseling room in a local pregnancy help center. With a clipboard on my lap, I faced my client and wrote her answers to questions on the intake form. She was not slow to answer but gave only basic information. She had finished high school but had no further education. Unmarried and living with friends, she took responsibility for her own support. She had been pregnant twice and had a three-year-old son.

Without hesitation, she posed her first question to me: “Where do I go for an abortion?”

Her query did not shock me, and it came matter-of-factly, as if she understood that I would give her a referral. This moved my assessment of her from abortion-vulnerable to abortion-minded. I explained that our policy was to neither recommend nor make referrals for abortions. As had been my custom, and with her permission, I gave a brief verbal description of a first-trimester abortion. I’m a firm believer that abortion is a serious moral wrong and that the client needs to know the truth. Human life matters. As I talked, her eyes showed a vague response, as if her mind were elsewhere.

She waited for me to finish and asked, “May I use your phone?”

I asked if it would be a local call and whom she wanted to contact.

“My doctor,” she replied. “He said he’d help me get an abortion.”

“Trotting Out the Toddler”

I explored her reasons for wanting an abortion and found that she and her partner felt they were unable to provide for another child. I decided to use a tactic I’d learned during pro-life training but had not yet tried in the counseling room. It’s called “Trotting Out the Toddler.”

Using the name of her young son, I asked if she would like to start an adoption process for him.

“No,” she said with emphasis, mystified by my question.

“I love him,” was her simple reply.

“But you said you can’t afford two children, so you could place your son in another home and go ahead with this pregnancy.”

Confused, she said, “I could not do that.”

“I understand,” I said, “for you see your son and you love him, and he loves you.”

I continued, “You cannot see the child in your womb, yet he or she is a living human being like you and me. Your young son at home was once at the same developmental stage as the baby you are now carrying.”

Not sure what she comprehended or if this line of reasoning would make any difference in her decision, I then offered her an appointment for an ultrasound the next week. She agreed.

The day before her scheduled ultrasound, I did something that I had never done before, nor have I done since. I went to her house. I reminded her of her appointment time and saw her little boy standing nearby.

However, when the ultrasound appointment time came, she did not appear. Nor did she answer any of my calls. I soon had no choice but to close her case, writing “no contact, decision unknown” in the file.

During volunteer training, I tell prospective counselors that they will think they’ve heard it all—until the next client comes in the door. My words have been proven true many times. This young woman fit so well the statistics of an abortion-minded client.

Around one-third of abortions are performed on women who have had a previous abortion. Over 60 percent of abortions are obtained by women in their twenties and who have at least one child. The woman may feel that it’s too expensive to have another child, or maybe her circumstances have changed—such as she is no longer with the father of her child. Now she finds herself pregnant again.

My client fit this profile. She had one previous abortion and one child. This pregnancy was unplanned, and the baby’s father was not fully involved. She was not married, and her income fell under the federal poverty line. To top the list, as an African American, she was considered a target by many abortion clinics and even doctors who recommend abortion. (See “Top 25 Abortion Stats in America” compiled by Care Net, July 2015, and available online by Life Issues Institute at
lifeissues.org/abortion-stats.)

Thankfully, that was not the end of the story about my young client. About a year later, I heard her name spoken as another counselor looked through the closed files for information. Curious, yet cautious, I asked if my client was in the waiting room and why she came.

“It’s for supplies,” the counselor said. “You know, diapers and such.”

I asked permission to go visit her before the counselor started the interview. No one else was in the waiting room, so I called her by name. She recognized me and said hello. I asked about her baby.

“Yes, I now have two sons and just need a little help with diapers.”

I asked what made the difference in her decision not to abort, and she said she just couldn’t do it.

As the counselor helped her pick out some supplies, I breathed a prayer of thanksgiving for my client who did not add to the statistics and who chose life for her baby.

This article was originally published as “She Needs to Know” in the June 2016 issue of At the Center, an online pro-life magazine. It has been updated with permission for CLM.

“Trotting Out the Toddler” is one of many tools for making a persuasive argument against abortion. This tactic and others have been compiled by Stand to Reason in its pro-life training course entitled “Making Abortion Unthinkable: The Art of Pro-Life Persuasion.” You can find this at str.org.

This technique has also been developed by Life Training Institute and is featured in its book entitled Pro-Life 101 and at prolifetraining.com.

In addition, this pro-life strategy is explained in the book The Moral Question of Abortion by Stephen Schwarz under the topics of “women’s choice” and “every child a wanted child.”

Ann L. Coker began as a volunteer at the Crisis Pregnancy Center of the Wabash Valley, located in Terre Haute, Indiana. After 10 years, she joined the staff as client services director, first at the main center and then at the Brazil, Indiana, center. She retired in 2012 but continued pro-life work as a board member of the Wabash Valley Right to Life. In 2017, Ann moved to Indianapolis where she now volunteers at a Life Center.