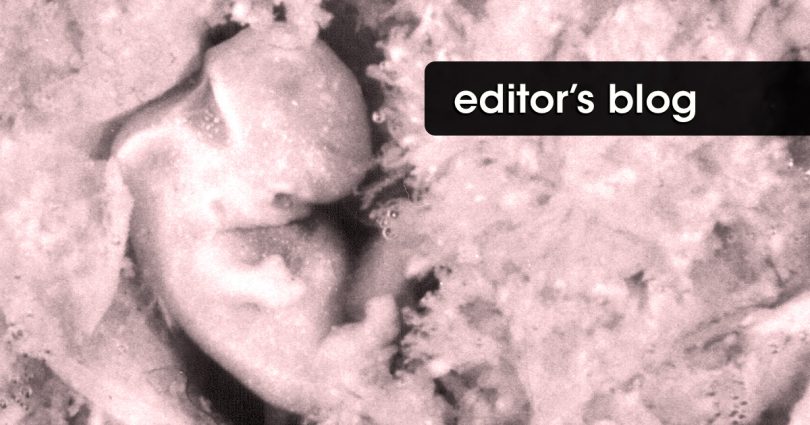 We’ve all heard the phrase “Truth is stranger than fiction.” Today it seems that the line between the two has become so blurred that many cannot even see the difference.

I have been ruminating about the word truth the last few days, especially as I have read story after story about the horrific events taking place in our country as a result of the SCOTUS “leak.”

To be clear, truth is defined as “a body of real things.” It’s also known as a fact. In other words, the truth doesn’t change. Nor is it subjective.

But in its never-ending quest to change the meaning of words, our woke society has taken on its own definition of the word truth by giving it a subjective spin. We now often hear the phrase “my truth,” as if the truth is something that is purely individualized or that can be changed at will. What the architects of the phrase my truth really mean is my opinion. But opinions and truths are not the same thing.

The word truth comes to mind as I think about the personhood of the preborn baby. I look at the science (the truth) that proves that he exists from the very first moment of creation—the moment the sperm fertilizes the egg—and I find it hard to fathom that anyone can deny his existence.

Simply consult an embryology textbook, and you will see that science proves that a preborn baby at all stages is a unique and unrepeatable human being—with all of his own DNA—from the very first moment he is created. But this truth is not just found in a textbook. You can see it for yourself, especially in our high-tech world of 4D sonograms. We have the privilege of observing a growing baby. There is no denying that he is a person.

So what is it then about this tiny baby’s existence that angers people? Why do preborn babies have targets on their backs?

As I ponder these questions, I think about the state of our nation, especially since the SCOTUS leak last week alludes to a possible overturn of Roe v. Wade, sending the abortion decision back to the states.

I think about Mother’s Day having recently passed and the police presence at my church because of threats by a pro-abortion group calling itself Ruth Sent Us.

I think about the tabernacle stolen in Texas.

I think about the words “my body, my choice” spray-painted on the doors of a church in Colorado.

I think about the vitriol spewed on social media.

I think about the fact that the Supreme Court justices must have extra security for their families.

I think about a Facebook post I saw on a “friend’s” wall that claimed that abortion laws are not about abortion “because this isn’t about abortion, it’s about men controlling women. It’s an easy topic for white men to flex their power over to remind the womenfolk that they will always have to kneel to them.” And I think about the fact that this was posted by a person who claims to be Catholic and liked by others who also claim to be Catholic.

Women can claim what they want, but their claims do not make the fictional scenarios that they’ve drummed up in their heads become truth.

The undeniable truth is that a baby is a human person from the very first moment of his creation.

The undeniable truth is that there is no “right” in the Constitution to kill a baby.

The undeniable truth is that, while a baby is in a woman’s body, he is not part of her body.

Those of us who stand for life for preborn babies should be angered by the recent events and by the fictional narrative constantly spewed forth by those who scream for their “right” to kill innocent children. We should be fed up with their incessant bullying and intimidation tactics.

On a daily basis, we hear the voices of the pro-aborts loud and clear; they want to incite anger. They want chaos. They thrive on and encourage vandalism, vitriol, and anger, and they care not a bit about the blood of dead babies.

So while they scream and rant about “rights,” let us look from the fiction they have created in their own minds to the truth that is as plain as the words on this page: A baby exists from the first moment he is created.

Because he exists, there can be no constitutional right to kill him. It’s that simple.