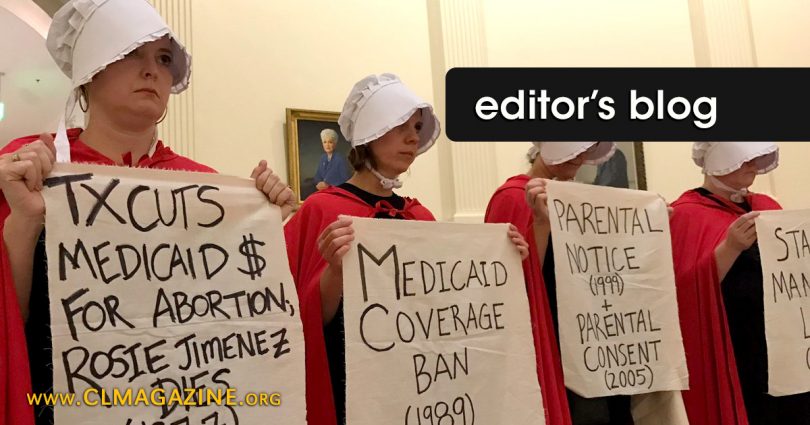 A co-worker recently pointed out to me how odd it is that abortion enthusiasts like Planned Parenthood and NARAL love to reference The Handmaid’s Tale, a fictitious story of a dystopian world in which women are forced to breed. They reference the story as if it were an argument in favor of abortion. NARAL even gives away a free “Handmaid’s Tale” button.

Here is a sample of a Planned Parenthood post referencing The Handmaid’s Tale:

These pro-abortion groups try to draw a parallel between what happens in this work of fiction and what is happening in the United States to elicit emotions and rile up supporters in the name of “reproductive rights.”

There is, however, one enormous difference between this pretend story and reality. In the story, women are treated like property and forced into pregnancy and birth to help a dying population. In reality, the overwhelming preponderance of women who abort their children are not forced into pregnancy. So, the parallel fails at face value.

The parallel fails in other ways, but I would rather focus on a statement by the author of this story, Margaret Atwood, to show just how off the pro-abortion thinking is on this topic.

Now for her statement. In an interview with Broadly mostly about The Handmaid’s Tale, Atwood said, “It does seem to be that every totalitarian government on the planet has always taken a very great interest in women’s reproductive rights.”

Vicky Jiang points out in The Epoch Times that China aborts roughly 13 million children a year…and most of those abortions are forced! That is the exact opposite of what happens in The Handmaid’s Tale.

So, Margaret Atwood, Planned Parenthood, NARAL, and all the women dressing up as handmaids in their various protests have it entirely backwards.

Their fiction and fictitious pro-abortion narrative are far stranger than truth.