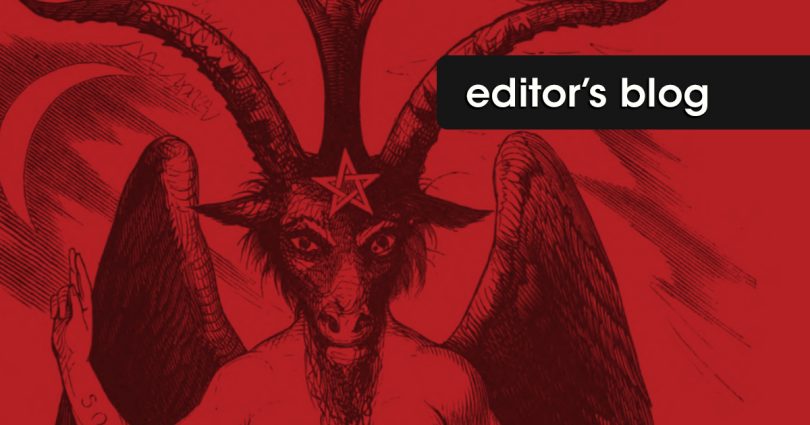 Evil is real. Make no mistake. The devil does exist. He’s crafty, he’s a liar, and he’s insidious.

1 Peter tells us: “Be sober and vigilant. Your opponent the devil is prowling around like a roaring lion looking for [someone] to devour.”

We can find him prowling in all walks of life and in places we never even imagined. And as we see in this article, some people seek him out.

I recently came across a reference to an article entitled “The Death of Justice Ruth Bader Ginsburg Pushed Me to Join the Satanic Temple.” Definitely curious about this, I had to find this woman’s article and read it myself. Written by a “40-something attorney and mother,” this article made me sad for humanity.

This woman writes that the death of Ginsburg “has put our civil and reproductive rights in danger like never before. And, so, I have turned to Satanism.” And by that, she means the Satanic Temple. Who is this group? We’ll get to that in a minute, but let’s look at this woman’s reasoning first.

She is worried about one thing only—the right to kill preborn babies. As she states: “Roe v. Wade is in imminent danger of being overturned not based on legal arguments or scientific reasoning, but because of religious objections to what is a safe and necessary procedure for the women who seek it out after discussion with their physician.”

Abortion is neither safe nor necessary for the baby, and sometimes it’s deadly for the mother as well. As far as scientific reasoning? Roe was based on scientific “evidence” that is now outdated. Science now proves a baby is a live human being from the moment he is created. We don’t need to debate that fact anymore; it’s just true.

The author then went on to say: “In the hours after Justice Ginsburg’s death, I sat wondering what the future would hold for my daughters. . . . [The Satanic Temple] is an organization I want standing up for my rights and for my daughters’.”

Is she really wishing her daughters could abort her grandchildren? Is that the future she wants for them?

So what does the Satanic Temple believe?

TST has seven fundamental tenets, one of which is that “one’s body is inviolable, subject to one’s own will alone.” It seems that the author of the aforementioned article felt drawn to this, though she fails to realize that a baby resides within a woman and that his body should also be inviolable.

In essence, TST is a secular organization that seeks to keep religion out of government. According to an interview with the founder, TST “espouses a non-supernatural anti-authoritarian philosophy that views the metaphorical literary construct of Satan as a liberator from oppression of the mind and body.”

Satan is a symbol of the Eternal Rebel in opposition to arbitrary authority, forever defending personal sovereignty even in the face of insurmountable odds. Satan is an icon for the unbowed will of the unsilenced inquirer—the heretic who questions sacred laws and rejects all tyrannical impositions. . . .We do not promote a belief in a personal Satan. To embrace the name Satan is to embrace rational inquiry removed from supernaturalism and archaic tradition-based superstitions. Satanists should actively work to hone critical thinking and exercise reasonable agnosticism in all things.

As a group, the Satanic Temple has brought both federal and state lawsuits against abortion restrictions and has even pushed for its After School Satan Club. Further, where there are public grounds with a monument to the 10 Commandments, the organization pushes to have a Baphomet monument also erected.

Sounds very much like they’re making Satan into a hero. By naming a group after him, injecting his name into daily parlance, referring to him as an icon, and mistakenly aligning his name with the desire to embrace rational inquiry, they are desensitizing the world to the inherent evil of Satan.

The Church of Satan

a brutal religion of elitism and social Darwinism that seeks to re-establish the reign of the able over the idiotic, of swift justice over injustice, and for a wholesale rejection of egalitarianism as a myth that has crippled the advancement of the human species for the last two thousand years. . . .

There are no elements of devil worship in the Church of Satan. . . . To the Satanist, he is his own God. Satan is a symbol of Man living as his prideful, carnal nature dictates. The reality behind Satan is simply the dark evolutionary force of entropy that permeates all of nature and provides the drive for survival and propagation inherent in all living things. Satan is not a conscious entity to be worshipped, rather a reservoir of power inside each human to be tapped at will.

So, while they say they do not worship Satan, per se, they seem to worship the evil associated with him. They channel him within themselves, they belong to an organization named after him, they have costume parties where they dress like devils, and they have the hideous image of Baphomet as their symbol—along with a pentagram. Further, one of the “Nine Satanic Statements,” which list what Satan represents, seems to shout with pride: “Satan represents all of the so-called sins, as they all lead to physical, mental, or emotional gratification!”

These Satanists even believe in a type of magic that can influence the will of others and in “fostering” the practice of eugenics:

[Eugenics] is the practice of encouraging people of talent and ability to reproduce, to enrich the gene pool from which our species can grow. This was commonly practiced throughout the world, as even a text on eugenics endorsed by the Women’s Christian Temperance Union can prove, until it was given a bad name by Nazi excesses. Until the genetic code is cracked and we can choose the character of our offspring at will, Satanists seek to mate the best with the best. Satanists who know that they are defective refrain from reproducing.

No one is defective in God’s eyes. And it is with His eyes that we must see our fellow human beings. Indeed, we must love as He loves. That is what is missing here. These Satanists do not know love of others. Their site is full of only self-love.

And we know that a world built on selfishness, hatred, or disdain for others cannot stand.

But we also see the beauty of God every day. We see that beauty in people who come together to pray for a sick child nearing death. We see it in a young man whose fire for the Lord led to his beatification. We see it in a beautiful sunset, in a kind word, in help from a stranger or friend, and we see it in the Eucharist.

The Eucharist IS Christ. Through it, we receive Him. We are nourished by His strength and His love.

So let us never forget that Satan is in our midst. As we read in Job 1:7: “The Lord said to the Satan, ‘Where have you been?’ Then the Satan answered the Lord and said, ‘Roaming the earth and patrolling it.’”

But let us also not worry because, as Christ says in John 10:10: “A thief comes only to steal and slaughter and destroy; I came so that they might have life and have it more abundantly.”

Our Father is walking alongside us. But Satan is all around us. He doesn’t even need to hide anymore. We have become so used to him that sometimes we don’t even recognize him. So beware. He’s waiting to devour you.