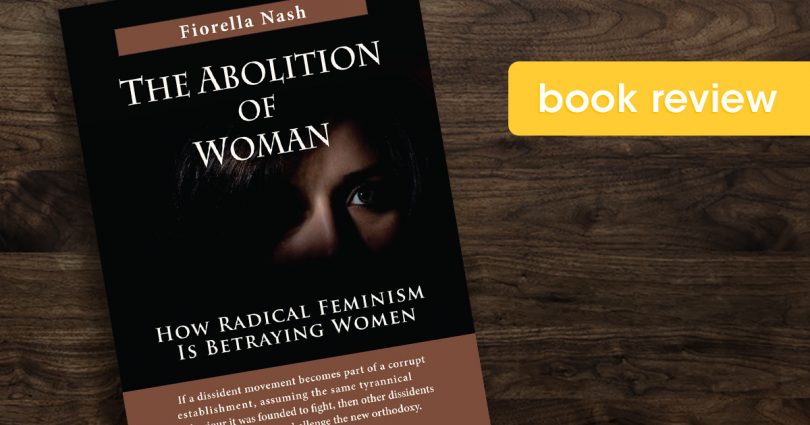 Born into a culture in which every aspect of a woman’s behavior and appearance was controlled—including her stride and hairstyle—British writer and bioethicist Fiorella Nash said she felt “trapped in a world that thwarted girls at every step and was stubbornly refusing to reform.”

Nash encountered feminism for the first time while attending an English convent school. Rather than providing young women with intellectual tools, the staff, she said, was petty and self-pitying—a dichotomy to pro-life feminists who believe in supporting and uplifting both women and their offspring.

This experience prompted Nash to spend over 10 years researching pro-life and pro-women issues from a feminist perspective, and, in her well-researched book The Abolition of Woman: How Radical Feminism Is Betraying Women, she pinpoints the damage caused by radical feminism.

Nash addresses various forms of female exploitation and refutes the lies used to promote them. She articulately explains that authentic feminism should naturally be pro-life, as it grew from the rejection that women are chattel and devalued in society. Somehow, over the years, she says, feminism lost its way and became ideologically obsessed with abortion. According to Nash, “If abortion were a lifesaving, life-affirming procedure that did not involve any other human life, pro-life feminists would be standing shoulder-to-shoulder with radical feminists outside abortion facilities in solidarity with the abortion providers. But abortion does involve another human life; every medical and technological advance grants more authority to this position, and even abortion’s most vociferous supporters struggle to dismiss this.”

Radical feminism harms women, writes Nash, ultimately devaluing the very women it claims to try to protect. Funding for contraception and abortion is allocated to developing countries, while quality prenatal care is disregarded. Gendercide is ignored, and, due to sex-selective abortion, an estimated 25 million women were never allowed to reach birth in India and in China. Currently, there are 40 million more men than women. According to Nash, “In China, the expression ‘bare branches’ is used to describe young men who cannot find a wife and establish a family; there are now some 40 million men in China—the majority in rural areas—who will never be able to marry and establish families of their own.” Alarmingly, the notion that coercive or forced population control is a “necessary evil” is nothing more than a trap to treat women’s lives as expendable in pursuit of some imagined greater good.

The Abolition of Woman offers support for all women who desire equality. Nash acknowledges that the path of the pro-life feminist is a difficult one, but one we must follow. To end the book, she quotes an old proverb that says, “‘Fear not the path of truth for the lack of people walking it.’” And her parting words echo this sentiment, as she firmly states, “I do believe that this path is worth walking.”