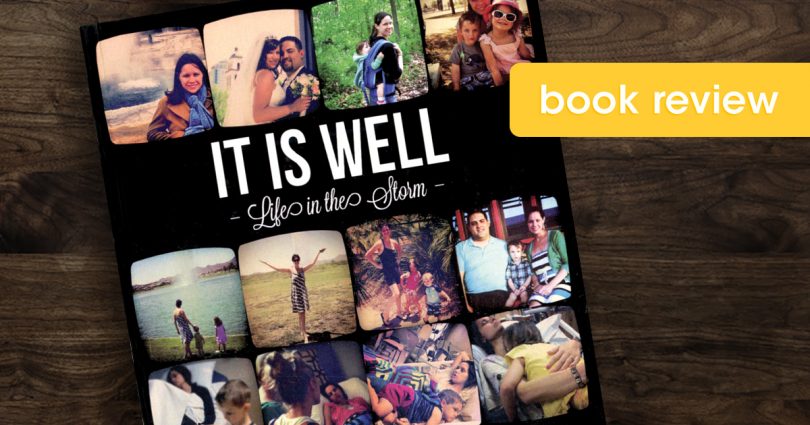 “Jesus still rose, so we will trust.” Despite events that would eventually shatter her hopes, dreams, and life, Angela Faddis continued to preach this important message throughout her 17-month battle with inoperable stage-IV colon cancer.

Just 32 years old and the mother of two small children, Angela’s life was one of devotion to Christ and abandonment to His will. On Easter Sunday 2011 she and Chris, her husband of six years, received the devastating diagnosis.

In It Is Well: Life in the Storm, Chris chronicles his journey with Angela as they find joy in the midst of suffering and knowing that death is not the end. Its title, It Is Well, is inspired by the hymn of the same name written by Horatio Spafford in 1873, after tragic events left him and his wife childless. The first stanza reads,

When peace like a river, attendeth my way,
When sorrows like sea billows roll;
Whatever my lot, Thou has taught me to say,
“It is well, it is well, with my soul.”

Chris stumbled upon it while doing research for a book on trust. As he walked with Angela through this storm, he realized God wanted him to write such a book.

Through a Facebook page (Facebook.com/AngelasStory), the couple interacted with thousands of followers by asking for prayers, providing updates, and receiving encouragement as Angela’s life ebbed.

Inspired by Romans 8:28 (“We know that all things work for good for those who love God, who are called according to His purpose”), Angela renewed her hope in Christ. Despite her imminent death, she increased her trust in God because she understood that He would work it for her good. Rather than giving up and requesting medical intervention to end her life, Angela embraced her path, transforming her pain and suffering into a prayer for drawing souls to Christ.

And despite overwhelming grief, Chris and Angela grew closer, finding strength and purpose through redemptive suffering. The plans they had laid out for their future were reprioritized as the couple began living primarily for heaven. “Our journey in life, all of it—the good, the bad, the extreme high points of joy and bliss, along with the downright awful pain and difficulty of loss or failure—all of it is ordered to get us to heaven” (92).

Angela lived with intentional joy, gathering hearts for the Lord along the way. She touched the lives of family members, priests, friends, and followers as she completed her journey on September 21, 2012, while holding her husband’s hand.

Death hovers over this book, but it’s not a depressing read. Chris shares the many ways God strengthened him and his family during their storm, and it will appeal to others facing their own storm.