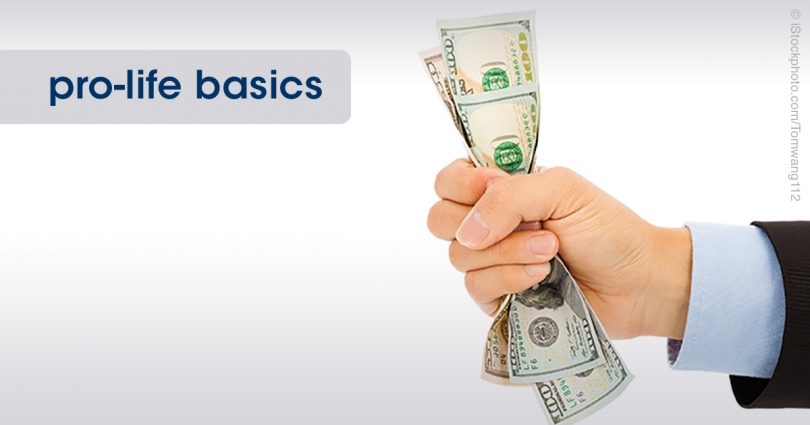 Recently, at American Life League, we discovered a website that confirms there are 15 states that pay for abortion by using tax dollars (see www.FundAbortionNow.org/Get-Help/Medicaid).Upon discovering this, we then faced the challenge of convincing our fellow Americans that the real question is not who or what is paying for abortion, but rather that the act itself is wrong.

One would think that, in this so called enlightened age, the grisly reality of what abortion does to a baby would horrify everyone. And yet the carnage goes on. So, how do we reverse this trend?

My granddaughter, a university senior, sent me a response so profound that I incorporated her thoughts into my own:

I think a good way to go about shifting folks away from focusing on how abortion is paid for is to explain to individuals why so many organizations and people pay for abortion in the first place.

One could explain that, many times, individuals or organizations will pay for abortion due to ignorance, because so many people are misled by the false notion that abortion is not an evil but a “good.” They think that abortions greatly help women. This is a big lie.

We know that abortion is a great evil; it is the killing of an innocent human being who cannot defend himself. But, people like to ignore this fact. And so we must help them see that, as Pope Paul VI taught us in Humanae Vitae (section 14), “[I]t is never lawful, even for the gravest reasons, to do evil that good may come of it.”

We should explain that the idea that an abortion “helps” a woman is a false notion designed to cover up a great evil. By helping people to refocus their thoughts so that they are recognizing the babies who die from abortion (rather than how abortion is financed), we give them the opportunity to contemplate the truth, rather than repeat pro abortion lies.

The truth that “it is never lawful . . . to do evil [so] that good may come of it” can help the person contemplating what abortion really is to better understand why it is evil—always and in every case. Yes, paying for that abortion is an evil act as well, but mere awareness of funding sources is not going to stop the killing. The eradication of ignorance about the humanity of the preborn baby will.