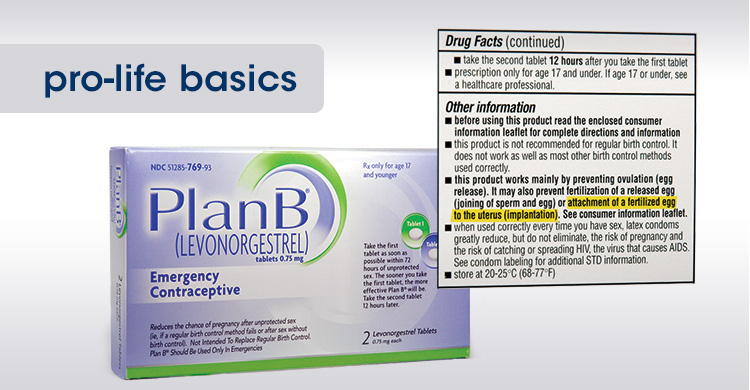 The basic answer to the question is yes, and here is the proof.

Chris Kahlenborn, MD, and his colleagues have diligently researched the abortive mechanism of the morningafter pill (“emergency con traception”) for some years. His first co authored study, published in 2002, addressed the “post fertilization effect of hormonal emergency con traception.” Here he and two other physicians exposed the fact that the morning-after pill does act in a way that could cause the abortion of an embryonic human being prior to implantation.

Yet this research fell on deaf ears—even in the Catholic community. Not only did Catholics in general ignore the facts about the abortive nature of the chemicals used in the morningafter pill, but many bishops and Catholic hospital personnel, and even many Catholic ethicists ignored them as well.

And Catholic institutions had not only the clinical evidence at their disposal, but also this clear statement from the Pontifical Academy for Life: “It is clear that the proven ‘anti-implantation’ action of the morning-after pill is really nothing other than a chemically induced abortion. It is neither intellectually consistent nor scientifically justifiable to say that we are not dealing with the same thing. Moreover, it seems sufficiently clear that those who ask for or offer this pill are seeking the direct termination of a possible pregnancy already in progress, just as in the case of abortion.”2

Clearly, Catholic medical facilities should reject the use of these pills, based on the scientific facts and the Academy’s ethical teaching. So, why are even more Catholic hospitals condoning their use for sexual assault victims?

In response to this serious problem, Dr. Kahlenborn and his colleagues have now published yet another scientific study. According to the article abstract, they found that the morning-after pill “works via abortion quite often.”3 Yet many Catholic hospitals continue the same practices for rape victims. What an outrage!

If there is a Catholic hospital in your community, you can share this study with hospital administrators and challenge them to make sure this pill is banned from use—thus saving lives and affirming Catholic medical ethics. Contact us for copies of this important study.