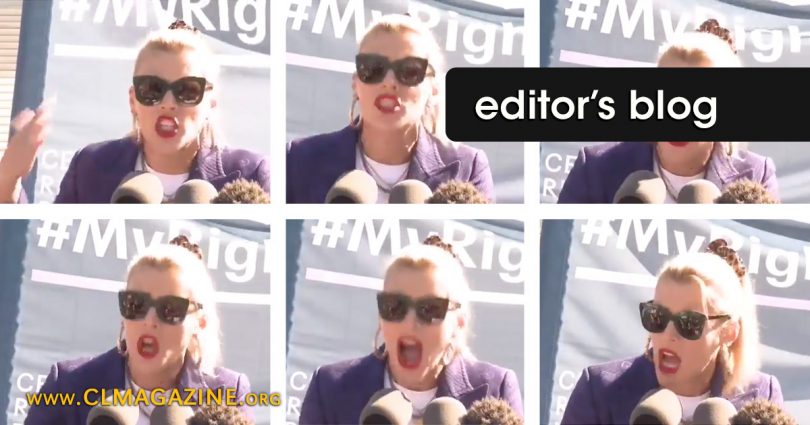 I only became a celebrity because I had a kid. Before I was pregnant nobody cared. . . . My husband has a theory that celebrity gossip feels so seedy, but if you can put a positive spin on it, like touting a new baby, then people somehow feel it’s okay. I joke to my agent that having a baby made my career.

Contrast that with the angry and profane-laced speech Busy gave at a rally sponsored by the Center for Reproductive Rights last week. She took the idea of shouting her abortion to a new level. Her voice was filled with such intense anger that I had to turn the volume down on my computer. In front of a crowd of cheering women, Busy said:

There I was, sitting in Los Angeles in my beautiful office of my own late-night talk show. Soon I would be driving my hybrid car to my beautiful [profanity] home, to kiss my beautiful and healthy children and my husband who had taken the year off to parent so I could focus on my career.

I will not be shamed into being quiet. . . . I will never stop talking about my abortion.

As the crowd whooped and hollered in positive response to Busy’s claim that a baby at age 15 would have precluded her from having the things she has in her life now, I couldn’t help but think about the tiny preborn baby torn from her womb. What about the bodily autonomy of this baby? What about his right to live? Busy had a choice; her baby did not.

Those cheers for the death of a child—and the right to kill a child—sicken me, not only because this actress claims that all the blessings she has now are because she had an abortion, but because no one in this cheering crowd understands that that baby was an unrepeatable human being. They don’t care about the science. They don’t care about the baby. They want only to feel that they have “control” over their bodies. Ladies, it ceases to be “just” your body when you have another human being growing inside of you. It becomes your duty to protect that baby, even if that means giving him up for adoption. You are now a mother, and that is never anything to feel ashamed about.

Busy’s extremely angry demeanor has stuck with me, and I have to wonder if part of her intense anger is directed at herself and the decision she made to abort her baby. In interviews, she speaks with such love for her two daughters. Does she understand that she would have loved the baby she killed just as much? Does she ever long to see his face?

We will never know what would have happened if Busy had chosen to give birth to her child all those years ago, but we do know that the tragedy of killing a child can never be undone.

Every single baby is a blessing. And until crowds of people stop cheering on murder, our country will remain steeped in this culture of death.