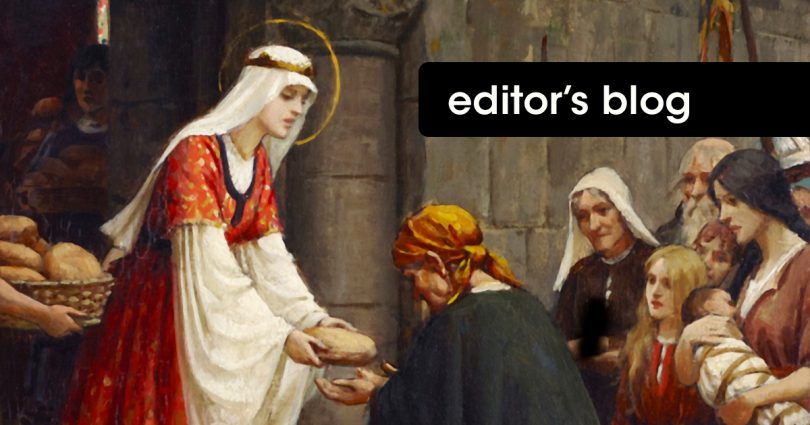 In a 2010 General Audience, Pope Benedict said of St. Elizabeth of Hungary:

In St Elizabeth we see how faith and friendship with Christ create a sense of justice, of the equality of all, of the rights of others and how they create love, charity. And from this charity is born hope too, the certainty that we are loved by Christ and that the love of Christ awaits us thereby rendering us capable of imitating Christ and of seeing Christ in others.

Every once in a while, we come across a saint whose life resonates with us or with our times—a saint whose devotion to others, whose work, and whose love of God is so inspirational that we can’t help but want to emulate it. St. Elizabeth is one such woman.

St. Elizabeth was born in 1207 in present-day Slovakia. When she was just a tiny child, her father, the king of Hungary, promised her in marriage to the man who was to become king of Thuringia. However, this man died, so at age 14, Elizabeth was given in marriage to his brother, Ludwig. This proved to be a good match, as the two fell deeply in love and had three children.

But it wasn’t just a good marriage that set Elizabeth apart from the other nobility of her day. It was her treatment of the poor and the sick. So as we draw closer to Thanksgiving, to Advent, and to Christmas—times of the year when the disparity between the haves and the have-nots is much more prevalent—let us look to St. Elizabeth’s examples and allow them to guide our treatment of others. Through glimpses into her life and her actions, we get an idea of the kindness we should show others, the good works we should strive to accomplish, and the awareness that we can all help those in need.

From a young age, Elizabeth felt compassion for the poor and a great devotion to our Lord. Even as a child, she gave money and food to the poor and practiced penance regularly. Believing that the luxuries of her upbringing were unnecessary, she refused to wear gloves or embroidered sleeves to Mass.

When she married at the age of 14, she continued giving alms to the poor, and she wore simple clothing so that she would blend in better with them. On a daily basis, she took bread to hundreds of people.

In 1223, some Franciscan Friars arrived in their town and taught her about St. Francis of Assisi. His life and teachings gave her greater resolve to take care of the poor and sick. She began to do even more for the poor, including selling items from the castle and giving away her possessions. She used her own money to pay for the building of a hospital for the poor and would visit the patients daily.

Elizabeth performed the Corporal Works of Mercy with love. She didn’t send people to do the difficult work of caring for others in her stead. She took her ladies in waiting and did these works on her own. Together, these women would distribute food and drink to the poor and even check their mattresses and clothing. Elizabeth frequently paid the debts of the poor and buried the dead.

Elizabeth understood that all she did glorified God and helped draw others closer to Him. In the faces of the sick and poor, she saw the face of Christ. In fact, Ludwig once said to her, “Dear Elizabeth, it is Christ whom you have cleansed, nourished and cared for.”

After six years of marriage, Ludwig died of a fever while on his way to fight in the Crusades. Elizabeth was crushed. To make matters worse, his mother and brother—who had not liked the fact that she constantly gave away their riches—took over and exiled her from the castle. It wasn’t long, however, before some of her husband’s friends helped her son—who was the rightful king—return to the castle and rule. From that time until her untimely death just before she turned 24, Elizabeth remained chaste and unmarried. In 1228, she joined the Secular Franciscan Order and spent the last few years of her life caring for the sick in the hospital she founded in honor of St. Francis of Assisi. She died on November 17, 1231.

Pope Benedict XVI once said that Elizabeth is a “model for those in authority,” yet we know that she is a model for all of us.

Elizabeth built a culture of life in her region by giving to the poor, nursing the sick, and loving as Christ would love. This is something we can all do. Though we may not have the means to give as much as she gave, we can all give something—whether that’s our time, our talent, or our treasures.

So as we approach Elizabeth’s feast day and the time of year when people feel their poverty the most, let the spirit of generosity that we learn from St. Elizabeth consume us. Let the love with which she cared for others engulf us. And let the kindness she showed for others lead us to see the face of Christ in others as we care for them with compassion and love.

This article first appeared in the Catholic World Report at catholicworldreport.com/2022/11/17/lessons-on-generosity-from-st-elizabeth-of-hungary.