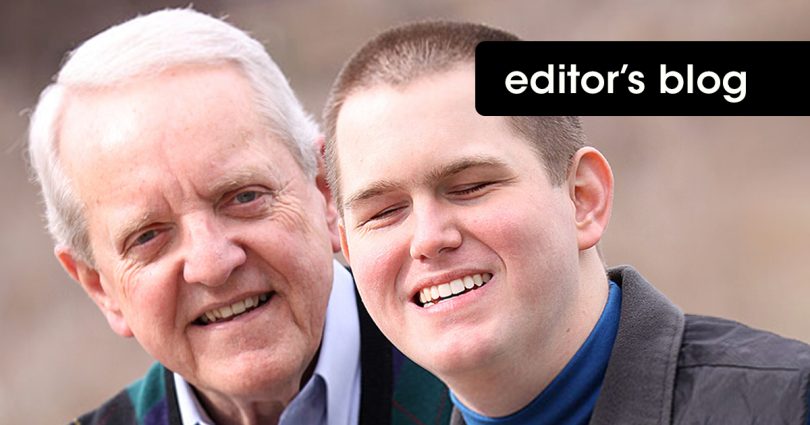 Every once in a while, we come across a story that not only shows God’s hand in our lives but that inspires us to make a difference in our world. Jim Bradford, a retired business executive from Tennessee, has proven that amazing things can happen when we look out for our brothers and sisters in Christ—especially those who are vulnerable—and help them realize their potential.

It was just a normal day in 1999 when five simple words began a conversation that has blossomed into a close friendship and a life-changing experience for two men—and countless others who have met the two over the years.

On that October day in 1999, Bradford deviated from his normal routine of stopping at Starbucks to get a cup of coffee. Instead, he stopped in at a local restaurant. As he sipped his coffee, he saw a young boy alone in a booth. The boy wore braces on his legs and hovered over a boom box. Bradford felt compelled to walk up to him, so he did, saying, “Hey buddy, what’s your name?”

Bradford would later say, “I’m certain that morning that God was my GPS.”

Bradford had just met a little boy named HK Derryberry—a young man being raised by his paternal grandmother who worked at that restaurant. HK often spent time there because his grandmother had no one to watch him. As Bradford would soon find out, HK was born blind and with cerebral palsy and a host of other medical issues. While pregnant with him, his mother died in a car accident and HK was born three months early. Doctors were not sure that this two-pound baby would survive, but he defied the odds. However, he would soon face another challenge—the loss of his father. His girlfriend’s death and the health problems of his son were too much for the boy’s father to handle; he left HK in the care of his mother when the boy was just five.

So his grandmother raised him, caring for him as best she could and knowing that he was special.

As Bradford and HK conversed, something about this little boy lit a fire in Bradford’s heart, and the two began spending more time together. The friendship quickly blossomed. Soon, HK began spending weekends with Bradford and his wife. They took him on outings and to church. After spending so much time with HK, Bradford noticed something amazing about his memory. The child never forgot anything. Ever.

It took some time to find an answer, but they finally did. According to HK’s site,

In 2012, the mystery of his memory was unlocked by medical researchers at Vanderbilt Medical Center’s Memory Clinic. They discovered that HK is one of only five or six people in the world with a medical diagnosis of hyperthymesia, otherwise known as Highly Superior Autobiographical Memory. He has the ability to remember every event including time and place that’s occurred to him since he was 4 years old.

But it’s not just HK’s unique ability to remember everything that makes him so special. It’s the fact that he uses his abilities to impart to others that everyone is a gift—that even those with disabilities can teach people a valuable lesson about life and about faith.

HK once said, “God has given each of us the ability to do certain things well. Philippians 4:13 says, ‘I can do all things through Christ who strengthens me.’ . . . In life, I’ve always been considered the underdog. People tell me things I can’t do, without complimenting me for things that I can.”

HK and Bradford set out to change that. In 2014, they began speaking to schools, to churches, to sports teams, and to youth groups. They want everyone to hear the message that “if God is in your life anything is possible.”

As the pair speaks across the country, HK impresses people with his infectious joy, his humor, and his ability to remember details. One of the fun things he likes to do with new people is to ask their birthday. When the person tells him, HK will immediately respond with what day of the week it was, some event that happened on that day, and what day it will be in the future (and, yes, he’s right!). This fun icebreaker grabs the audience’s attention and helps them see past any outward signs of disability.

Let us not forget what Christ taught in the parable of the talents about the master who entrusted his possessions to his servants. To those who multiplied those talents, the master responded, “Well done, my good and faithful servant.” But to the servant who said “out of fear I went off and buried your talent in the ground,” the master became angry and rebuked him, saying, “You wicked, lazy servant! . . . For to everyone who has, more will be given and he will grow rich; but from the one who has not, even what he has will be taken away.”

It’s a powerful lesson to learn, and one that we should never forget. Let us not be like the wicked and lazy servant and overlook the gifts God has given us. Let us not bury our gifts or fail to use them to glorify Him. And let us not fall into the trap of focusing so much on what we don’t have that we neglect to be thankful for what we do have, for we all have gifts we can use.

Sometimes it takes sweet souls like HK Derryberry and Jim Bradford to help us remember what’s truly important and that we can serve God by serving others.

So, as we continue to celebrate Thanksgiving this week, and as we think about the things we are truly grateful for, let us remember inspirational stories like HK and Bradford’s. Let us remember that God made us perfect in His eyes. The world may see brokenness. The world may see flaws. The world may even tell us we’re worthless. But God sees His beloved children. And the thing that matters most is hearing those seven words when we have passed from this world to the next: “Well done, my good and faithful servant.”

This article first appeared in LifeSiteNews at lifesitenews.com/opinion/this-thanksgiving-lets-remember-to-use-our-gifts-to-serve-god-and-others/?utm_source=top_news&utm_campaign=catholic.